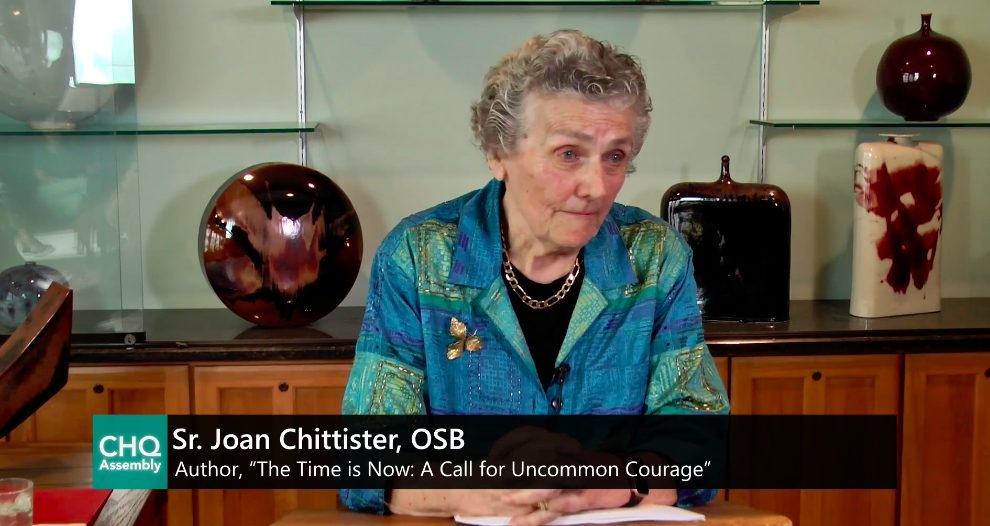 Benedictine Sister Joan Chittister framed each expansion of women’s legal rights with this question. While women gained new legal freedoms over time, remaining social and legal restrictions would keep the full expression of those freedoms just out of reach.

After (white) women in the United States gained the right to vote in 1920, women wouldn’t be allowed to serve on juries until the 1970s. And after being encouraged to work in male-dominated fields during World War II, many were forced to give up these jobs when the war ended.

Chittister spoke at 2 p.m. EDT Monday, July 27, on the CHQ Assembly Video Platform. She discussed topics such as equality and its impacts at both national and global levels in her lecture “A Woman’s Life: A Good Event/Bad Event World.” She pre-recorded the lecture on July 24 in Erie, Pennsylvania, where she resides.

When Chittister was 14, she found three books on spirituality authored by women in her high school library, including a book of poems by an unnamed nun from Stanbrook.

Now, after experiencing extensive discrimination as a woman in her own career as a nun and former Catholic high school teacher, Chittister is an award-winning author of 60 books and an international lecturer.

Chittister kicked off Week Five’s Interfaith Lecture Series theme, “The Feminine Spirit,” with a story about a farmer and his son. With each failure and success in his life — losing his horse, the horse returning with a horde of wild horses for the farm, a wild horse crippling his son and his son not dying in war as a result of his condition — the farmer said, “Good event, bad event. Who knows?” in response to his neighbors’ questions.

Chittister said this can also describe the constant give-and-take of women’s rights. When the Equal Pay Act of 1963 passed, companies worked around its requirements by giving men and women the same job responsibilities with a different job title and a higher wage for the man. This loophole wasn’t resolved until 2009 with the Lilly Ledbetter Fair Pay Act.

Similar roadblocks occurred with Title VIII, which opened up collegiate programs for women. As many women as men attended college by 1980, then women surpassed men in doctoral degrees by 2004.

But promotion and wage opportunities have not increased along with higher education. To this day, women reach their peak earning point at 40 years old with an average of $60,000 annually. Men in comparison peak at 65, earning $102,000 a year on average.

“Women got the jobs, but they didn’t get the money,” Chittister said.

Two-thirds of minimum wage workers are women who make $7.25 per hour, a non-negotiable federal rate (though this varies by state). While working 40 hours a week at this rate, a single mom and two kids would be $8,000 short of a livable wage.

“Men do not really respect women,” Chittister said. “We have found out they harass them. And when women get a job at the highest level, they too often find that the job depends not on their talents but on their sexualization. You don’t believe me? I wouldn’t believe me either. Why don’t you leave here and ask the Weinsteins, and the Aileses, and the Epsteins, and the Cosbys, and the media, and the number of offices we’ve had to empty because women weren’t safe six feet away from the door?”

Chittister said this is not just a problem of the working and domestic worlds of the United States, but also in the global shadow economy of human trafficking.

“Why don’t you ask the little girls on the roadsides out there now who are being trafficked for pleasure, left in poverty, used up and thrown away while we do little-to-nothing except maybe pretend that we don’t see them at all on Super Bowl Sunday?” Chittister said.

Chittister then cited a Pew Research Center poll which reported that 40% of women under 30 want to leave the United States.

“Our daughters have figured out that they are neither safe nor valued here,” Chittister said.

Chittister said that above all, women everywhere need education. Women make up two-thirds of the world’s illiterate. And women in many developing countries still need freedom over their own finances and marriages, as in choosing who they want to marry and gaining the right to divorce someone if needed. Forty-nine countries lack domestic abuse laws while women killed by a domestic partner make up 47% of homicides worldwide.

Chittister said that religions like Christianity — despite Genesis calling for men and women, both created in God’s image, to take responsibility for dominion over the world — that enshrine male gods and establish male values play a part in the patriarchy’s oppression of women.

“This moral sickness is a sickness of the soul,” Chittister said.

While the U.S. Constitution and subsequent amendments are supposed to protect the rights of women and other vulnerable groups, Chittister said that presidential executive orders and the Supreme Court have been stripping away rights for women.

“(The) Constitution is being shredded for its lack of specificity,” Chittister said.

The federal government’s lack of respect for women is presented on a global stage by maintaining trade relationships with countries who enslave women in open contract work.

Chittister cited the Rule of Saint Benedict from the sixth century, which was the first document in the West to define human relationships. Written in a world defined by male authority and rule, Benedict not only defined appropriate behavior of benevolent rulers to be nonviolent, non-dominant and non-authoritarian — the antithesis of Roman men who ruled the Western world at the time — but also outlined women to have similar agency.

This document outlined eight corollaries for both men and women to follow, which throughout called for men to stop putting themselves above women, who also need to speak up for their needs.

Chittister said these attitudes can be boiled down into four behaviors that need to be happen to make space for equality and in turn, a better world: Men need to listen to women, women need to speak up for their needs, men need to stop “blustering commands” at women, and women need to be treated like fully functioning adults.

Chittister said multiple times that women should not tolerate unacceptable behavior by men in their marriages, workplaces or anywhere in the world. She ended her lecture with one last warning.

“The patience of women may be what destroys women,” she said.