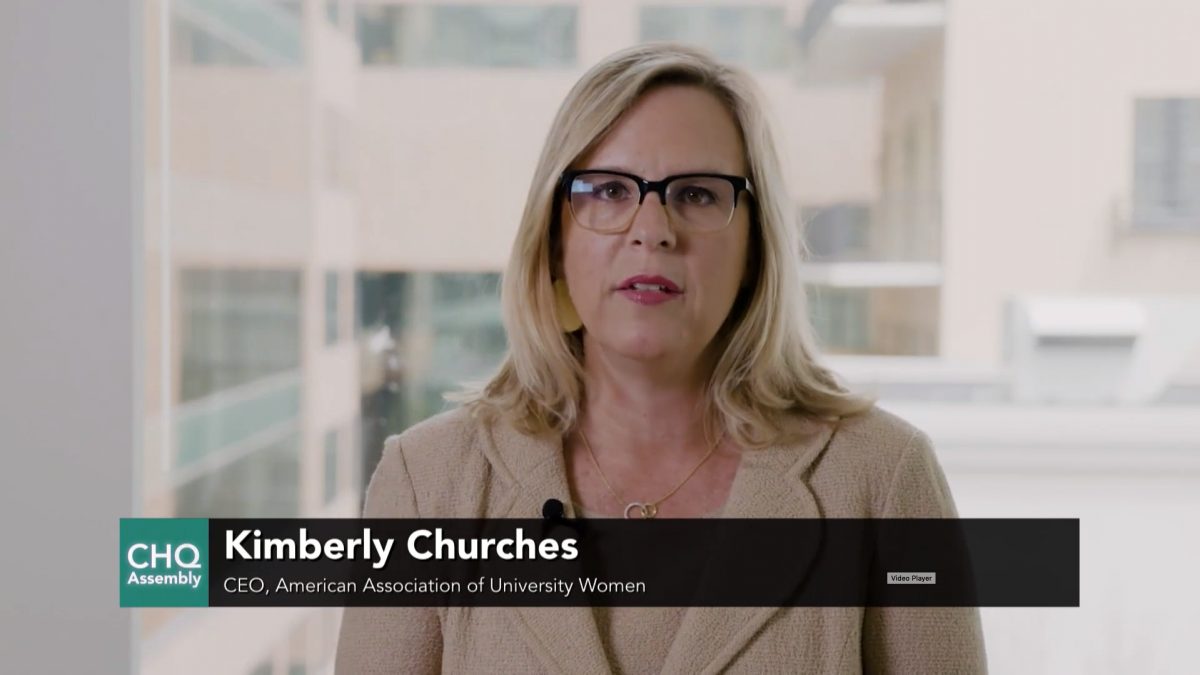 When women become mothers, said Kimberly Churches, chief executive officer of the American Association of University Women, they’re often hit with a “motherhood penalty;” they’re expected to do most of the work around the house and for the child, and earn on average 70 cents per dollar that a father makes. When men become fathers, Churches said they often receive a “fatherhood bonus,” meaning they are seen as more trustworthy and “tend to see a good bump in their salaries and in their tenures.”

Churches said the COVID-19 pandemic has amplified all of the United States’ inequalities. She said that almost 30% of working Americans have no sick leave, and have to put themselves and their families at risk for the infection for their paycheck. Women are particularly at risk, as Churches said they comprise more than 70% of the health care industry, including 85% of the nurses, and the majority of low-wage workers.

“Can you even imagine talking once we’re past COVID-19, once we’re past this terrible pandemic, and we get back to some semblance of our old lives?” Churches said. “Can we even imagine anyone suggesting that all working human beings don’t deserve paid sick leave? We can’t even fathom that as we’re living in it right now during the coronavirus pandemic.”

Prior to working at the AAUW, Churches was the associate vice chancellor at the University of Denver, and director of development at the University of North Florida. At 10:45 a.m. EDT Tuesday, July 28, on the CHQ Assembly Video Platform, Churches presented a lecture titled “Close The Gaps Forever” as the second part of Week Five’s theme of “The Women’s Vote Centennial and Beyond.” She focused on the rifts in different stages of the feminist movement and inqualities in the United States currently.

Different areas and generations of the feminist movement are usually described as waves, but Churches said describing the movement as a wave “also assumes a single unified approach or agenda; yet, frankly, that’s never been the case in our history.”

She also said that there have never been a single, unified agenda in approaching racial and gender equity, and these different views have caused rifts between generations of feminists.

The American Association of University Women was founded in 1881 when Churches said access to higher education was largely unavailable to women. She said that Harvard University produced a research report around that time which found that if women pursued a life of using their mind, they would not be able to procreate. The AAUW’s first research report debunked this long-held theory, and Churches said the nonprofit has continued to be committed to being non-partisan and grounding their research in fact, as well providing more than $4.5 million annually in fellowships and grants.

“This isn’t just about raising our fists up and saying, ‘Now is the time for true gender equity,’ after decades and decades of work,” she said. “It really is about meeting people where they are, that’s educational institutions, employers and employees, and society as a whole.”

Churches said that the leaders, such as Elizabeth Cady Stanton and Susan B. Anthony in the first wave of feminism, made the movement largely about white women. This focus on white women can be seen in the 19th Amendment, which did not help women of color as much as their white counterparts.

The major legislative and legal victories of the second wave of feminism included the Equal Pay Act, Roe v. Wade, which made abortion legal in the U.S., and Title IX, which protects against discrimination based on sex in education.

“While the gap has narrowed a bit since 1963, progress has frankly stalled over the last two decades,” Churches said. “We’ve only budged about a nickel in two decades, which means the law is not there with practice again.”

An example of the women’s movement disagreeing on a single agenda is with the Equal Rights Amendment, which was passed through Congress in 1972 and has recently picked up steam in 2020. During this time, many people, including women, believed that if ERA was passed, it would “deny a woman’s rights to be supported by her husband, privacy rights would be decimated and, if you can imagine, the assumption was that women would be sent into the armed forces and straight into combat.”

“The second wave has lasting images of feminists as angry, man-hating and lonely. As the second wave began to lose momentum, (this view) stuck to the word ‘feminism’ and it continues to haunt the way we talk about feminism today,” Churches said. “In a lot of ways, feminism has been seen as a bad word, a highly polarizing word for so many and empowering for others.”

Churches said the women’s movement of the ‘60s and ‘70s had a large focus on combating racism, but several of the issues they worked on did not resonate with many Black and Latino women. One of these differences, Churches said, is that many Black women were accustomed to working outside the home because of “economic security for their families about putting food on the table and keeping a roof over their heads.”

She also said while Black and white women fought for reproductive rights, Black women wanted to stop the forced sterilization of people of color.

“This (divide in the movement) also gets to feminism versus womanism,” Churches said. “Womanism is really the idea of supporting all women, no matter their class or their race, and not simply focusing on females.”

While the policies and laws around women’s rights that previous generations have fought for are major milestones, Churches said they do not go “far enough to ensure that we can change human behavior and break down biases and barriers for women to finally close the gaps.”

She said these barriers include the gender pay gap, educational and occupational segregation and the leadership gap, as well as sexism and harassment.

“It really is a Venn Diagram of all of these issues overlapping from the beginning of a woman entering into adulthood, all the way through to retirement and death,” Churches said. “We’re holding women back from economic security at every stage of their life.”

She is proud that women now earn more educational degrees, but gaps still exist — out of the $1.54 trillion in American student loan debt, women hold two-thirds, with the most affected being first-generation college students and Black women finishing their undergraduate degree.

Churches said, at the same level of work, education and expertise, women earn on average 82 cents for every dollar men earn, with Black women earning 62 cents and Latina women earning 54 cents. She said collectively “working women are losing out on more than $500 billion a year” and that closing this gap would “move 2.5 million children out of poverty.”

The lecture then shifted to a Q-and-A session with Emily Morris, vice president of marketing and communications. Morris asked Churches how to raise sons who are good feminists.

“I say the same for my friends with young girls or young boys,” Churches said. “Gender inequities are not just for girls and women.”

Churches said that her daughter plays baseball and is interested in political science, and her nephew loves ballet.

“My daughter gets applauded by men, women, girls and boys for playing baseball,” Churches said. “Do you think that my nephew gets applauded in the same way?”

She is more optimistic with younger generations, who, she said, “will not accept anything but an inclusive real society. Not one that is just words on paper, but that is true and action and true (in) form.”

“I think because we’re raising our kids now of understanding, they’re coming of age at a time of a huge LGBTQIA movement, of understanding more about their Brown and Black brothers and sisters sitting beside them,” Churches said. “(They have an) understanding what access to money means, and socio-economic status and geography matters in a way that we just did not have because we didn’t have a 24-hour news cycle when we were raised.”