Before rockets orbited the earth or man walked on the moon, a group of four female mathematicians brilliantly calculated the data that made space travel possible, and they did it behind the scenes, without modern computers and without any of the recognition that men such as John Glenn or Neil Armstrong received. 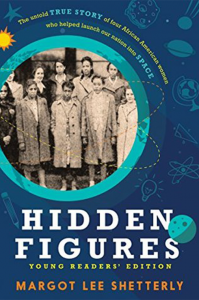 They were known as NASA’s “human computers,” but their names were Dorothy Vaughan, Mary Jackson, Katherine Johnson and Christine Darden.

The choice of book goes hand in hand with the Week Five theme, “The Women’s Vote Centennial and Beyond,” which celebrates the 100th anniversary of the passage of the 19th Amendment and examines the slow progress toward gender equality in the United States.

One element of the discussions for Week Five is the topic of those who were left out of the mainstream suffragette movement, and, within this, the role played by racial inequalities and the Civil Rights Movement.

Manager of Community Education Karen Schiavone chose the book Hidden Figures specifically to aid in the understanding of race and gender bias both in the past and present, and is hopeful that the Young Readers edition of the book will allow younger community members to engage with the topic.

“These are difficult topics at any age, so it’s lovely when an author is able to lend meaning and understanding to them for younger readers,” Schiavone said. “On a more granular level, we endeavor to provide book selections throughout the summer on a range of topics and formats, with particular focus to variety when it comes to fiction, nonfiction, poetry and classic literature. Hidden Figures was an ideal nonfiction selection for our 2020 list with its relevance to Chautauqua’s theme.”

Hidden Figures, a biographical work of nonfiction, chronicles the lives of four Black women who calculated the numbers that made space travel possible during the era of the Space Race, the Cold War and the Civil Rights Movement. For many years, their work went unnoticed — as the spotlight shone on the men who walked on the moon or piloted space shuttles — because they were women, and because they were Black.

“With the rise of movements like #MeToo and #BlackLivesMatter, highlighting these extraordinary women and their work is even more relevant today, as national discussions on gender equality and civil rights continue,” Schiavone said.