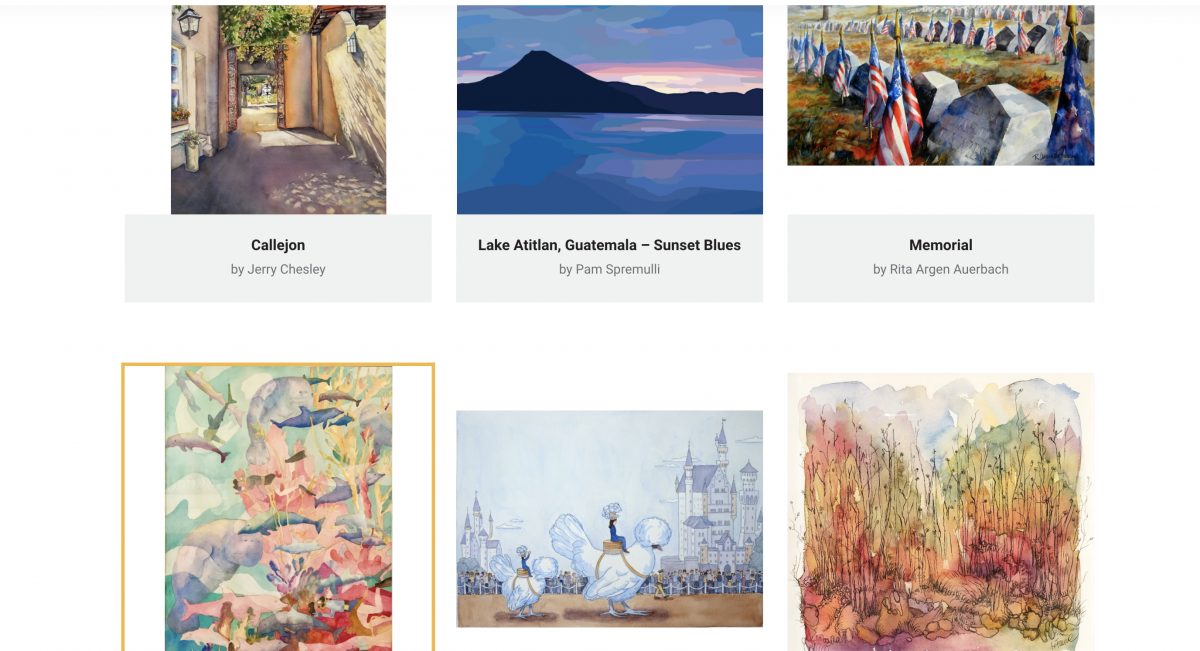 Chautauqua Institution’s CVA Members, previously known as VACI Partners, spend every summer appreciating, supporting and promoting Chautauqua Visual Arts, from the exhibitions in the Strohl and Fowler Kellogg Art Centers to the Chautauqua School of Art. In the last month of each season, they get the chance to show off some works of their own.

This year’s Members Exhibition, “Places We Have Never Been: New Works by CVA Members,” features 36 pieces from 24 members. In accordance with the Institution’s virtual season, the show will be held exclusively online and will be available to view starting at 10 a.m. EDT on Monday, Aug. 10, through the CVA website. The exhibition will run until Sept. 30.

Pam Spremulli’s family has been coming to Chautauqua for generations. She grew up in the village of Lakewood, about 10 miles from the Institution, and now lives in Cleveland and visits every summer with her own family.

“We just bought a place on the grounds so I’m super thrilled; my dream has come true,” she said. “Now we’re really all in.”

For this year’s exhibition, Spremulli decided to take the theme, “Places We Have Never Been” literally. Her two pieces “Lake Aitlan, Guatemala – Sunset Blues” and “Aurora Shores, Tranquility,” are landscapes of two places she’s never been, inspired by photos from friends.

“During the pandemic I started doing these landscapes,” she said. “I never thought my style would work with landscapes so much, but I (wanted) to do something new and test my boundaries. … I really like the way they turned out.”

Spremulli is a graphic illustrator and art teacher. She uses Adobe Illustrator to create her pieces, specializing in architectural drawings and animal portraits, all in her signature, playful style.

“I tell people the mouse is my brush and the computer screen is my canvas,” she said. “I take the ordinary and make it a little something extra.”

Spremulli has been a member of CVA Partners for years. She remembers when exhibitions were held in the gallery on Bestor Plaza that is now The Chautauquan Daily’s offices.

“I was in there one year, they didn’t have air conditioning (then), and some of the paintings were sweating — they had to take the watercolors down because it was so hot,” she said. “It’s very different now.”

Spremulli’s two favorite shows every year are the Membership Exhibition and the School of Art’s showcase.

“(They’re) always so eclectic and different,” she said.

When Rita Argen Auerbach heard about the exhibition’s theme, she decided to take it in an unconventional direction. While her piece, “Memorial,” shows a place she has been — the veterans section of the Forest Lawn Cemetery in Buffalo, New York — the painting has had a life of its own separate from Auerbach.

Auerbach is a Buffalo-based artist who has been visiting Chautauqua for the last 50 years. She specializes in watercolor and, in 1980, helped form the Niagara Frontier Watercolor Society.

“I have been passionate about exploring and teaching and exhibiting in this medium all these years,” she said.

In 1986 Auerbach was part of the Chautauqua Soviet Council on Cultural Affairs, a delegation of Chautauquans who were invited by the U.S. State Department to travel to Riga, Latvia, for a cultural conference. Following the trip, she was invited to exhibit her work at the Art Academy of Latvia, making her the first American woman to do so.

“Memorial” was one piece in the exhibition. It was Auerbach’s way of making a statement about American patriotism and military sacrifice.

“(During my visit), I learned that the Soviet teaching was that America doesn’t really know war, that we were mentally warring, but we had not known (real) war,” she said. “When I decided what work I would take to the exhibition, I made certain that I represented that first-hand knowledge of war.”

After its international journey, “Memorial” was bought by Buffalo art collector Charles Rand Penney, who owned it until his death in 2010, when it was willed back to Auerbach.

“It has quite a providence,” she said. “It has been exhibited (across Western New York), but never in Chautauqua.”

Aurbach said what she misses most during the pandemic shutdown has been the ability to visit art museums and galleries.

“From the get-go, the one thing I missed, and still miss, is seeing wonderful, quality art shows,” she said. “I just have not been into a full-range, wonderful gallery in ever so long.”

Helen Power is an art therapist and former art teacher living in Falls Church, Virginia. She has been visiting Chautauqua for more than 10 years and has been making art all her life.

“We really miss (the Institution) this year,” she said.

Her pieces, “Continental Divide” and “On the High Seas,” are abstract acrylic paintings. Power enjoys experimenting with color and texture in her work and incorporating mixed media collages into her paintings.

“My creative process represents a search for balance and rhythm in the elements of each artwork,” she wrote in her artist’s statement for the exhibition. “I thoroughly enjoy the journey.”

While she has made realistic work as well, she loves the freedom of abstract painting.

“I don’t always know how it’s going to turn out, but I keep going until I’m happy with it,” she said. “Sometimes that involves lots of layers of paint, and decision and indecision. … It’s more of an internal thing, rather than external.”

During a typical season, Power would be visiting the CVA galleries and the School of Art, riding her bike around the grounds and painting on her front porch.

“I love painting; I paint every day,” she said. “I just think it’s a wonderful experience, and I hope (my work) gives other people as much joy as it does me when they look at it.”

Theoretical physicist Brian Greene to discuss his new book, Until the End of Time: Mind, Matter, and Our Search for Meaning in an Evolving Universe