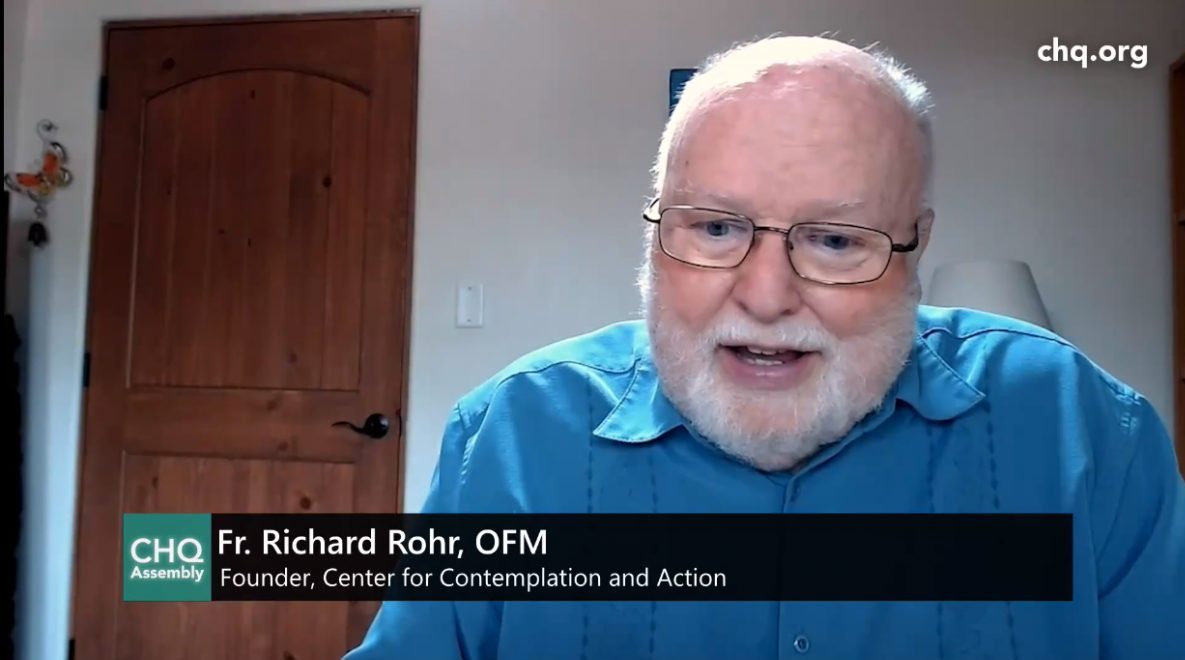 The world puts evil on autopilot.

In his second lecture of the Interfaith Lecture Series’ Week Eight theme of “Reframing Our Journey: A Week with Fr. Richard Rohr, OFM,” at 2 p.m. EDT on Tuesday, Aug. 18, Rohr described how the world enables evil.

The day before, Rohr gave his keynote lecture which framed the facets of evil he describes in his book, What Do We Do With Evil?: The World, the Flesh, and the Devil. The book serves as an accompanying work that explains the social character of evil that he mentioned in his previous book, Falling Upwards.

Rohr said that religions have localized sin on the flesh of the individual. Though there is agency within the conscious individual who refuses to cooperate with evil when they recognize it, the world perpetuates evil by determining it as acceptable. And the environment someone is born into, based on factors including their gender, race, culture and the people who raise them, shapes how they move in the world.

“We are all good based on one another’s goodness,” Rohr said.

This also means the inverse: We are all bad by one another’s badness.

When Rohr served as a chaplain in an Albuquerque jail for 14 years, he would enter the jail knowing he was about to meet a criminal. Some were guilty of murder. Others were guilty of rape.

“I would go in expecting to meet this person I read about in the paper, fully expecting to hate them because of the murder or the rape or the dastardly thing that they’d done — even wanted to hate them,” Rohr said. “And then I’d spend an hour sitting in the cell hearing their story.”

Often, Rohr would be shocked they were living at all.

In the Old Testament, Edith, Judea and Israel fall in sin, and the entire kingdom of Moab was punished by God. In the New Testament, Jerusalem falls. And Jesus referred to the city of Capernaum in Matthew 11:23, “And you, Capernaum, will you be lifted up to the skies? No, you will go down to the depths.”

“That’s the collective that made you the way you are,” Rohr said.

The New Testament refers to this collective as the world. It is the system or the game that everyone is in, but different rules apply to different people.

“You gotta know what a culture excludes to know what it worships,” Rohr said.

Rohr said that in the United States, Americans hate the poor and people of color and worship riches, white privilege and individualism — on both sides of the political spectrum.

“Until you get rid of this illusion of you being a separate self, I don’t think you’ll get very far in understanding the message of the gospel or in dealing with the sinful nature of society that is killing all of us,” Rohr said.

This illusion also allows systemic evil like racism and sexism to flourish. Rohr said leaders in politics who blame a few corrupt individuals, and police leaders who blame police brutality on a few bad apples, is a tactic that distracts people from the systemic issue. However, the last three popes have used vocabulary defining the phenomenon of collective evil with the terms “structural sin” and “institutional evil.”

“Evil is a set of agreements that only make us happy and aren’t true,” Rohr said.

In order to escape from the burden of evil, Rohr said to find ways to not cooperate with it: by removing oneself from its mechanics.

“The point of Gospel is to keep people from buying into the sin system,” Rohr said.

To prepare for his next lecture, “Reframing Our Journey: The Flesh,” at 2 p.m. EDT on Wednesday, Aug. 19, Rohr recommended his audience read Romans and Galatians to see if it reads differently with this new lens of evil.

This program is made possible by the Eileen and Warren Martin Lectureship for Emerging Studies in Bible and Theology & The Strnad Family Fund.

Panic and spring into action before it is too late, McLaren urges