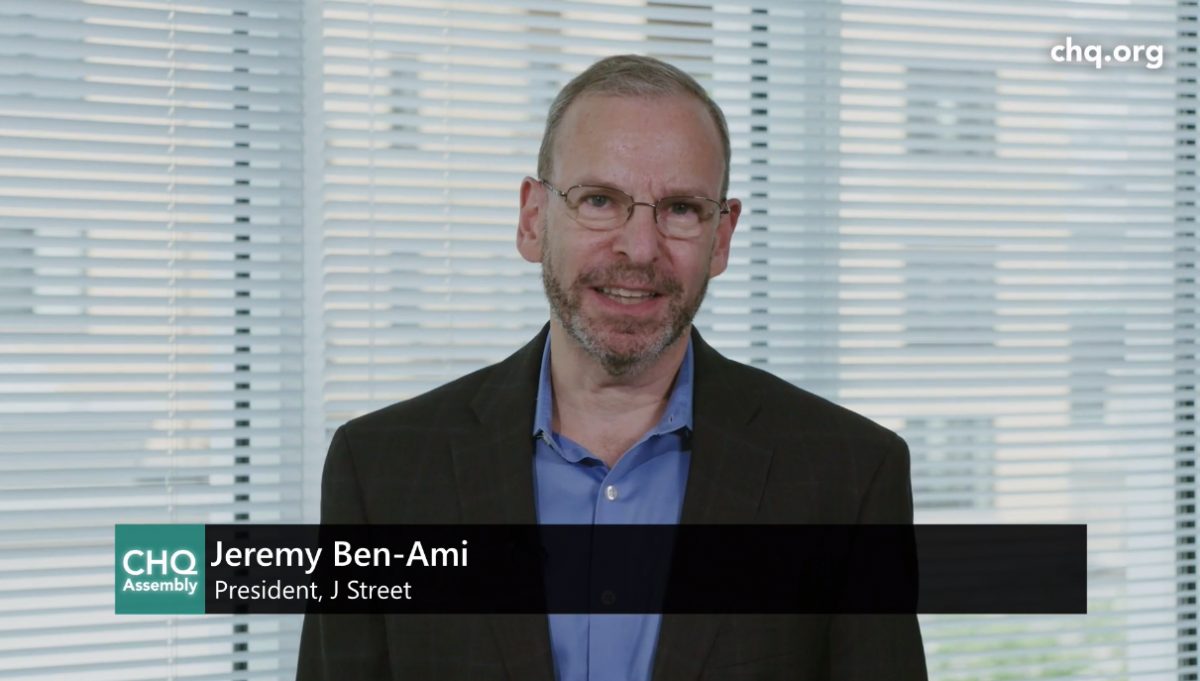 Jeremy Ben-Ami founded J Street in 2008 with the mission to solve the ongoing conflict between Israel and Palestine with a two-state solution. As of 2020, this conflict has lasted almost 100 years.

“For nearly 100 years, every effort to make peace between Israelis and Palestinians and to resolve this conflict has failed,” Ben-Ami said.

Ben-Ami delivered his lecture “Israel-Palestine 2020: One State Remains the Problem & Two States the Solution” at 2 p.m. EDT on Wednesday, Aug. 26. It was released a day after the Rev. Mitri Raheb spoke about hope for Palestine’s future. Both lectures were part of Week Nine’s Interfaith Lecture Series theme, “The Future We Want, the World We Need.”

Ben-Ami said that public debate on how to solve the conflict between Israel and Palestine is constant. But in July, The New York Times columnist Peter Beinart stoked the conversation after he announced he stopped believing in a Jewish state or that a two-state solution was possible.

Ben-Ami said he still believes a two-state solution is possible. He believes in Israel as a self-determining solution to a long history of persecution against Jews. Ben-Ami said that a Jewish person is still Jewish without being religious, especially when in Israel. Jewish people are not just united by a religion, but are also a nation of people united by language, culture and heritage — and that aforementioned fraught history.

“Rarely was the story of Jewish life in the lands of others one of integration and success,” Ben-Ami said.

He used his own family as a case study. His distant relative, Isaac Abarbanel, was an adviser to King Ferdinand and Queen Isabella in 1492 and told them to stop persecuting fellow Jews through the Spanish Inquisition. But his high status didn’t save him. Abarbanel and his family fled Spain, and he and his descendants would remain stateless for hundreds of years. Eventually, his paternal great-grandparents settled in the first agricultural settlement of Israel. Ben-Ami said they bought land from absentee Ottoman landlords after fleeing persecution from what was then the Soviet Union.

The Holocaust caused the international community to agree with Zionist Jews that Jewish people needed Israel as a homeland. In 1947, the United Nations granted statehood to Israel. It was mandated to exist next to the country of Palestine, whose people had deep historical attachment to the land as the descendants of empires past — Greeks, Romans, Byzantines, Arabs, Persians, Muslims, Mamluks, Seljuks, Crusaders, Ottomans and more.

“So while the historic, religious and cultural connection of the Jewish people to the land of Israel is real, so too are the connections of other people, including many who can trace their family back hundreds of years and more,” Ben-Ami said. “Palestinian nationalism is rooted in such just claims and a national history that itself is soaked in blood and tears. So two peoples, each with just claims and a legacy of suffering, find themselves locked in a conflict that has tortured this holy land for close to a century without resolution.”

Ben-Ami said that out of the nearly 14 million people in Israel and Palestine, which do not have a clear-cut border in between, approximately eight million are Jews, who enjoy a developed country that is a leading economic and military power. Palestinians, treated as second-class citizens, make up the rest of the population. They experience a vastly different reality, which Ben-Ami said must change for Israel to be a legitimate democracy that upholds Jewish values.

“Only if there is a national home for the Palestinian people in the state of their (area) between the rivers and the sea, can Israel be both a safe haven for the Jewish people and live up to the values of freedom, justice and equality on which it was founded,” Ben-Ami said.

But the two-state solution has had an 85-year track record of failure, Ben-Ami said.

To actually get closer to achieving this solution, Ben-Ami said that it will take a different set of political leaders after the current U.S. administration to push this forward, because Israel President Benjamin Netanyahu is attempting to annex the West Bank and U.S. President Donald Trump supports him, while 650,000 Jews have illegally expanded settlements past the 1967 Green Line. According to international laws, legal annexation is meant to be a temporary fix that benefits those who live there rather than the occupiers. But what Ben-Ami calls Israel’s “de facto annexation” of Palestine has continued beyond a temporary fix.

Meanwhile, Ben-Ami said that Palestine currently lacks a strong political leader that can step up and lead it as a state.

“Neither society is primed, nor do they have the leadership needed, to force the necessary tough decisions,” Ben-Ami said.

Walls and barriers around the cities of Palestine built by Israel in attempts to limit Palestinian citizens also need to be dismantled in order to create a clear boundary between the two states. While Ben-Ami said these would be challenging to remove, he noted that “it’s also true that these obstacles have literally been built by people. And there is nothing built by people that can’t be moved or taken down by people when there is the will to do so.”

And the United States eventually needs to demonstrate the cost of occupation to Israel, Ben-Ami said, and reverse prior U.S. administrations’ efforts to erase Palestine by not recognizing it as a state and ignoring atrocities by Israel.

Seeing a two-state solution in the future seems impossible to others who have given up on the solution after all this time. But Ben-Ami said that surprise plot twists in recent history have happened before.

“Who thought while Mandela languished on Robben Island, he would become the country’s president? Who would have thought or foreseen in 1988 the collapse of the Berlin Wall a year later? We have experienced all these outcomes in just the past generation or two. So perhaps all those who are predicting the triumph of doom and gloom and pessimism, when it comes to two states, they’d benefit from a dose of humility grounded in our recent history.”