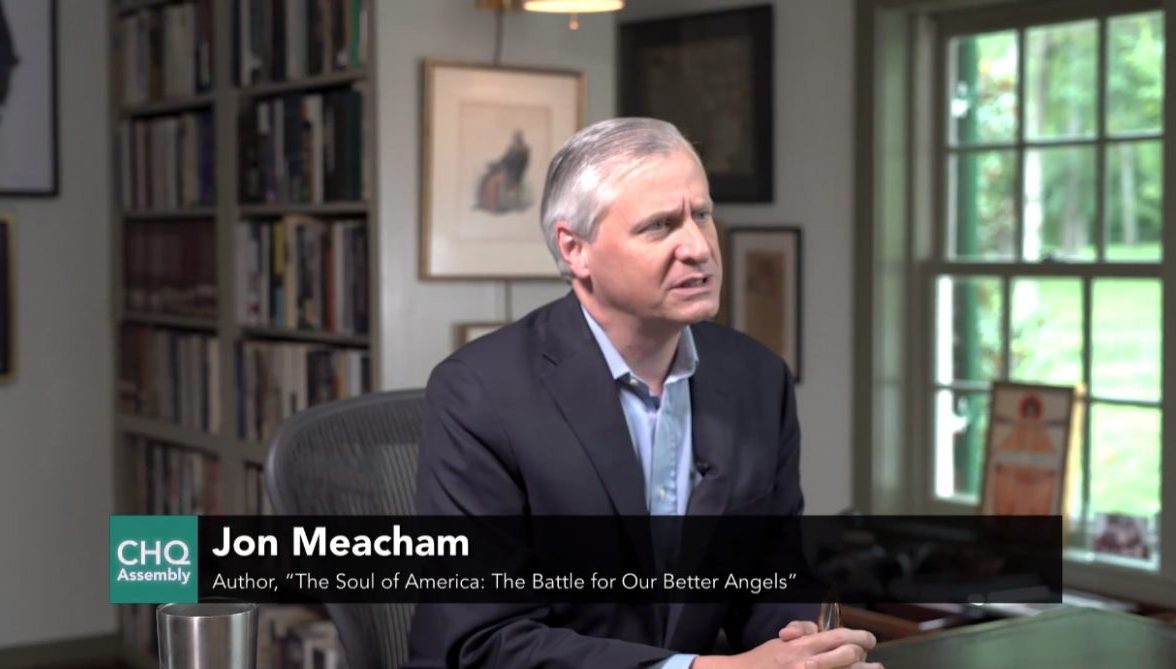 In 1786, with Daniel Shays leading a rebellion and the Articles of Confederation proving to be ineffective, George Washington and the other Founding Fathers believed the newly formed United States was in peril. Presidential historian and Pulitzer Prize-winning author Jon Meacham said people were burning prisons, court houses and other government offices, and there were even rumors of the U.S. returning to monarchy.

Henry Knox wrote in a letter to Washington that he was “in dire apprehension that a beginning of anarchy with all its calamities has approached and (we) have no means to stop the dreadful work.”

“Fears of American decline are, therefore, older than the Republic,” Meacham said. “The imminence of chaos of a nation torn asunder, of a country irretrievably lost, has been a standard political trope from the beginning.”

Meacham said that this kind of political language is almost universal currently, particularly in national campaigns.

“First, I’m neither Democrat nor Republican. I’ve voted for candidates of both parties and plan to continue to do so,” Meacham said. “The thoughts I’m offering you grow out of a historical sensibility and, I hope, an appreciation of the best of the past, not out of any particular partisan concern of the moment.”

At 10:45 a.m. EDT Friday, Aug. 21, 2020, on the CHQ Assembly Video Platform, Meacham delivered a lecture titled “How the Constitution Endures.” Meacham discussed the differences between the struggles of the Founding Fathers to create a stronger system than the one laid out by the Articles of Confederation, and the current, extremely partisan political climate, as well how each generation of Americans has dealt with a major crisis.

He said the Constitution depends on the character of the United States’ leaders, and if citizens are willing to sacrifice individual interests in order to maintain the country. He also quoted Winston Churchill: “Democracy is the worst form of government, except for all the others.”

Meacham said the the Constitutional order is currently in jeopardy, from freedom of the press to voting rights. He believes that the Constitution will endure if enough people choose to play by the rules, even if they are not what everyone wants them to be. But he did say the Constitution does have major problems.

“The Constitution was essential in preserving slavery and in securing white male supremacy,” Meacham said. “It was written, in many ways, to protect people who look like me.”

He said that the Founding Fathers did not think the document “fell wholly in perfect from heaven. They knew it was the work of many flawed hands and hearts.” This is why they created ways for future generations to amend the document, and also why reformers like Frederick Douglass believed the best way forward was through amendments, and not revolutions.

From the Civil War to the Cold War, Meacham said the U.S. has largely been in a “perpetual crisis,” and yet people have time and time again reached temporary consensus. He said each generation tends to think of itself as uniquely challenged.

“Our crisis is this: We live in an age of division, of self-absorption. We stare at screens, we filter our news to our ideological predispositions. We offer reflective opinions without thought and with increasing fervor,” Meacham said. “Yet, our common welfare, our common constitution, lowercase c, depends not on what separates us, but on what unifies us.”

The U.S. has amended its Constitution 28 times since its conception, and Meacham said that each time, people have opened their arms wider.

He also said people cannot, and have never, agreed on everything at all times, and that “ferocious disagreement and exhausting debate are hallmarks — inevitable hallmarks — of American politics.”

The lecture then transitioned to a Q-and-A session with Chautauqua Institution President Michael E. Hill, who asked Meacham what he thought about Joe Biden’s Aug. 20 presidential nomination acceptance speech.

“Acceptance speeches are like inaugural addresses — more fall flat than soar,” Meacham said. “I’ve not seen reviews as universally as positive as Biden is getting. I think it’s the most effective acceptance speech since 1988 with George H.W. Bush.”

Meacham said Biden said what he needed to, which was to tell the country he was not Franklin D. Roosevelt, Washington or Martin Luther King Jr., but that he’s “a hell of a lot better than the other guy.”

Hill then asked Meacham to talk about his upcoming book, His Truth Is Marching On: John Lewis and the Power of Hope.

Meacham was a reporter with The Chattanooga Times when he met Rep. John Lewis in a hotel in Atlanta. He knows the exact date, Thursday, Nov. 24, 1992, because he kept his notes. Meacham asked Lewis what the difference was between protests in places like Selma and Nashville, versus serving as a congressman.

“He gave a classic John Lewis answer. It was: ‘You keep fighting. You keep going,’” Meacham said. “(In) the world he was born into Feb. 21, 1940, in Troy, Alabama, with his great-grandfather was born (enslaved), … his sense was, ‘Yes, it takes a long time, but it’s worth the struggle.’”

Meacham said he was lucky enough to meet many times with Lewis at different news events.

“This is a story that I wanted to tell. He was great,” Meacham said. “We talked until about probably three weeks before he died. And one of the things that makes me a little gooey is he got a chance to read (the book). That meant a lot to me.”