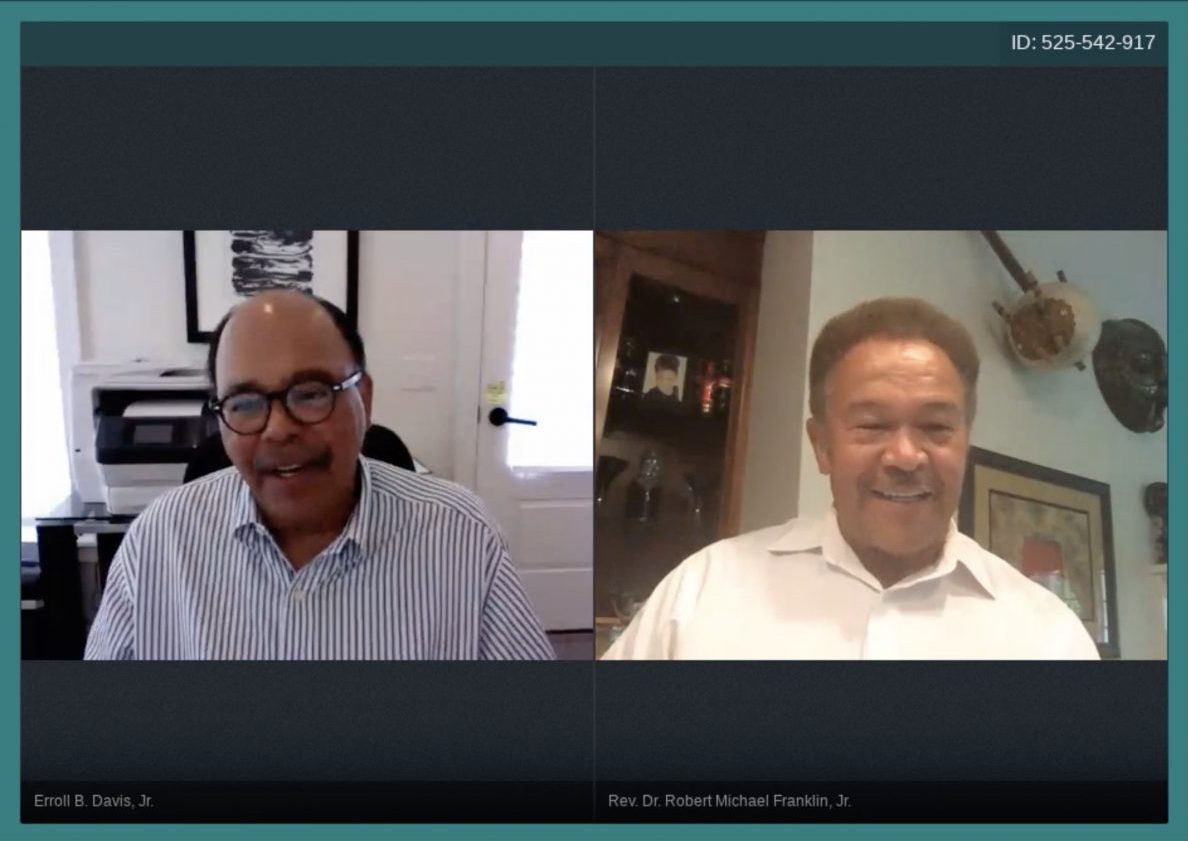 When the Rev. Robert M. Franklin, Jr. studied the initial community responses to The Mirror Project — an online conscience-building collaboration between Chautauqua Institution and the African American Heritage House — he found a community that was eager to learn, discuss, and take action against racism.

The Institution welcomed Franklin, a long-time Chautauquan, former director of the Department of Religion and president emeritus of Morehouse College, to address the community and engage in a Q-and-A at 3:30 p.m. EDT Monday, Aug. 3, on the CHQ Assembly Virtual Porch. Erroll B. Davis, Jr., president of AAHH, said that one of the objectives of the project was to welcome a new expert every two to three weeks to speak on the major themes and concerns that arise in the community’s responses to weekly prompts about racism. Franklin was the first guest for The Mirror Project conversations.

In the community’s repsonses, Franklin said he noticed three major themes: a desire to learn about racism and how to be anti-racist, a desire to engage in dialogue and hear new voices, and a desire to act against racism as they see it.

To establish the theme and direction of the discussion, Franklin looked to three quotes from historical thinkers. First, he pointed to a quote from 19th-century French sociologist and political theorist Alexis de Tocqueville in which he noted that America’s greatness “lies in her ability to repair her faults.” Second, Franklin shared a quote from American writer and civil rights activist James Baldwin, who believed that “people are trapped in history, and history is trapped in them.”

For his final quote, Franklin recalled his experience at the 1993 inauguration of President Bill Clinton. While standing in the freezing cold Washington, D.C. crowd, Franklin heard the now-famous words from poet Maya Angelou: “History, despite its wrenching pain, cannot be unlived, but if faced with courage, need not be lived again.”

“Those three quotes — the wisdom of Tocqueville, Baldwin, and Angelou — I think are the frame for how I engage (with) this wonderful set of reflections on the need to focus not simply on individual and personalized racism, bias, (and) stereotyping, but to think about systems that carry the burden and weight of those terrible penalties against certain people: people of color, women, LGBT (people), or non-Christians and non-Jews,” Franklin said.

Franklin noted that Chautauquans are becoming more aware of how racism is perpetuated in ways that are not personal. While in the past, people conceptualized racism as one person attacking another on the grounds of skin color, people are now understanding that the most pervasive forms of racism are systemic.

One example of systemic racism Franklin pointed to was the continued failure to teach younger generations about Black history: in particular, the history of outward racism, discrimination, and hate crimes. Franklin repeatedly cited the 1921 Tulsa Race Massacre, in which a Black community in Oklahoma was reduced to rubble and 300 were killed after a series of attacks by armed white rioters and arsonists. While this event is one of the largest cases of racist violence in the country, it remains largely untaught in American classrooms.

“We have to be honest about the fact that there are larger systems and structures at work that preserve certain practices so even when you have good people with good hearts, we (have) systems behind us — in us, as Baldwin would say — that we have to reckon with,” Franklin said.

“There’s a third dimension (to racism), of the internalized. That often afflicts people of color themselves when we internalize the negative perceptions and expectations of other people of color,” Franklin said. “That’s a more complicated dimension that did not get named in the (community responses) I read, and I want to flag that as work that we all have to be attentive to.”

Internalized racism begets generational trauma in people of color. This phenomenon was first observed in the 1960s in families of Holocaust survivors: although the new generation had never lived through the event, they internalized and learned the fears and coping mechanisms of their parents and grandparents. Now, the phenomenon is being recognized in marginalized groups like Black people and refugees.

“In African-American communities today, there’s a lot of talk about generational trauma: what we inherited from our ancestors,” Franklin said. “Some of the stuff our ancestors did to cope 20 years, 50 years, 100 years ago may be inappropriate today, may be dysfunctional today. And yet, in our culture, in our church life, in our family life and lore — some of those practices are still at work. And we got to work through that.”

Davis and Franklin addressed that one unhealthy coping mechanism was the silence and lack of education that lent itself to institutional racism. In Franklin’s point of view, his ancestors who moved North during the Great Migration may have avoided teaching their children about the lynchings and segregation that were so common in the Deep South in an attempt to shield them from pain or paranoia.

“I think about my own grandmother. Some of the things they experience, they did not want to tell us  — they wanted to protect us kids,” Franklin said. “We’re now in the North, we should be free. (My grandmother thought) don’t burden (the kids) with what Emmett Till experienced and observed.”

However, Franklin noted that fleeing the Deep South did not shield him from racism. While in the ROTC, he and a colleague named Colonel McCurdy — both in uniform — were stopped by police and had their car searched for drugs, despite no real evidence of drugs present.

“I felt bad for Colonel McCurdy — I was embarrassed for him because … it just didn’t seem right. This is the best good citizen I know, and he’s standing on the street with this police officer,” Franklin said. “I thought, ‘There’s something wrong with this,’ but I found myself drawing on that inner resource: be willing to compromise, to negotiate in order to live another day, and resist this kind of racism in the future.”

Franklin noted, however, that this chain of silence is being broken by young people across the country. In particular, he applauded the young people at the Institution for their willingness to have uncomfortable conversations.

“I’m so proud of the young people at Chautauqua who are having those honest conversations: especially in the Chautauqua (Theater Company), all of the wonderful arts programs, some of the young clergy, (Chautauqua Symphony Orchestra) leaders. Chautauqua’s blessed by youthful energy, vision, and innovation,” Franklin said.

Not only were young people commended for their work: Franklin pointed Black women as being the people who have consistently cut through harmful, generational practices of internalized racism.

“It’s that internalization, it’s Black people practicing bad practices toward other Black people. It’s the colorism, and the color hierarchies. It’s judgements about hair, and morphology and images of beauty. So, it’s a lot of stuff in the Black community we’re working through,” Franklin said. “Fortunately, it really credits so many of the especially female authors that are breaking the silence on these issues and say, ‘We need to talk about this.’ Because, often it has been men in power who have not broken the silence on these issues of race, gender, and class oppression.”

Looking at the prompt responses from The Mirror Project and at current events, Franklin said that while there is a major emphasis on learning and action, he wishes there was more dialogue on issues of racism. Most importantly Franklin stressed the importance of finding willing partnerships for discussion, rather than “grabbing people off the street.” He said that the Institution, as well as university spaces would be a great place to start.

Franklin also recommended that white politicians, namely the 2020 president candidates, take on issues of prison, police, and education reform in their policy. He noted the book The New Jim Crow, by Michelle Alexander, which illustrates how these institutions perpetuate centuries-old racism.

Not only should reform come on the political level, Franklin said that business owners and executives should be working to reform their industry from the inside. He advised that those in charge regularly assess and grade the inclusivity of their board, CEO, leadership, employees, and company culture.

This constant evaluation is applicable to places of worship, as well. Franklin said that churches could, and should, take initiative in teaching about racism and equality, as well as be a resource for those who seek extra help.

“I love the idea of taking initiative. I urged you early on (in the presentation) after hearing from James Baldwin, Maya Angelou, and Alexis de Tocqueville — you need to take a few more risks,” Franklin said. “Push out a little beyond your previous practices, the status quo, your comfort zone, and be honest about (racism). If you’re not being a little stretched, you’re probably not doing enough.”

Franklin urged individuals to address and fight racism peacefully. He said that he and his wife were disappointed at the loss of buildings, jobs, and community resources as a result of destructive individuals at Black Lives Matter protests across the nation this summer. He pointed to some of the final words of Rep. John Lewis for guidance.

After Lewis’ death, The New York Times published an open letter titled “Together, You Can Redeem the Soul of Our Nation,” in which he advocated for nonviolent social change. Having participated in the Civil Rights Movement of the 1960s himself, Lewis urged young activists to look to their elders for wisdom. Franklin called this letter a must-read.

In his April 2020 book Moral Leadership: Integrity, Courage, Imagination, Franklin points to many social justice leaders of this era as a model for moral leadership and ethical integrity — such as Martin Luther King, Jr. and Cesar Chavez.

Franklin and Davis encouraged the audience to participate in the next Mirror Project prompt following the discussion. This prompt asks the audience to do a personal “inclusion audit,” to see how they can welcome more diverse ideas into their life.