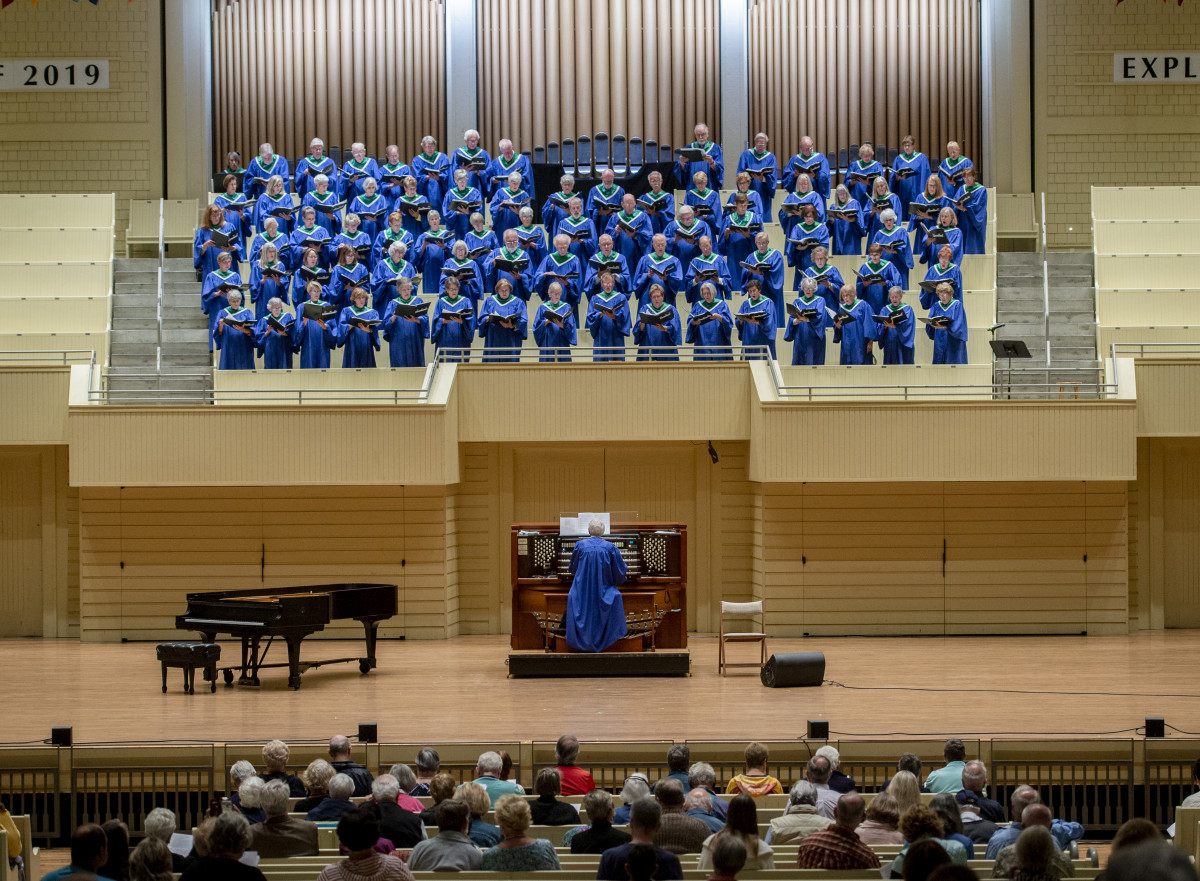 Away from the rigid corners of a computer screen and toward the open air space of the classic Amphitheater is the return of the Chautauqua Vespers and Sacred Song Services.

At 8 p.m. Sunday in the Amp, the Vespers will conclude the day at Chautauqua with classic hymns, prayers and blessings and will include acoustics from the congregation, quartets and the 5,640-pipe Massey Memorial Organ.

Chautauqua Vespers and Sacred Song will then alternate weeks, with Sacred Song being Weeks Two, Four, Six, Eight and the final Sunday of the season, and Vespers being Weeks Three, Five, Seven and Nine.

In past years, Vespers was held at 5 p.m. in the Hall of Philosophy, but Director of Religion Maureen Rovegno said 8 p.m. is closer to the traditional time of the vespers prayer in Christianity.

Rovegno described three of the hymns, “Day is Dying in the West,” “Now the Day is Over” and “Largo” as long-standing, beloved traditions at Chautauqua.

“It’s not so much performed as it is experienced,” Rovegno said about the services. “It’s very experiential for people and consists of all the beloved elements that Sacred Song has had for many decades.”

Week One’s Vespers is based on a 1903 Vespers program, said Joshua Stafford, the Jared Jacobsen Chair for the Organist and director of sacred music, who found the liturgy from 1903 with the Rt. Rev. V. Gene Robinson, vice president of religion and senior pastor at Chautauqua.

Services will open with “Day is Dying in the West.” The lights will begin dimly lit and will be slowly turned on as the lyrics indicate light is coming, Robinson said.

“Largo,” the final hymn, will be repeated multiple times. Showcasing the organ’s vast reach, it keeps building and building to a powerful crescendo until, all of a sudden, it stops, Robinson said. As is tradition at Chautauqua, the crowd will then silently disperse, concluding the service.

“People who never experienced it before just find it extremely moving, and those who have keep coming back because they love it,” Robinson said.

Although the two will be similar services, Vespers will average 30 minutes in length, and Sacred Song will run about 45 minutes, which is much shorter than in previous years.

“At the end of a very intense, wonderful day here at Chautauqua, I think people will appreciate a less lengthy experience,” Rovegno said.

Shortened services will also allow people time to move to the Chapel of the Good Shepherd for the 9:30 p.m. Service of Compline, she said.

The longer Sacred Song Service will include added prayers from Robinson focused on Chautauqua, the nation and the world, Robinson said. The longer services will also occasionally follow a theme that the music and readings will reflect, such as the July 4 Sunday service following a patriotic theme.

Stafford, born and raised at the southern end of Chautauqua Lake in Jamestown, is in his first in-person year as organist and conductor for the Sunday night services.

“It feels pretty amazing,” he said about being in this position. “It’s something I always dreamed of as a kid, so it feels sort of surreal to be here.”

Stafford is filling the shoes of Jared Jacobsen, who spent 65 of his 70 summers at Chautauqua, including 23 years as the organist. Jacobsen died in a car accident on Aug. 27, 2019, two days after his final service in the Amp.

“We are all thrilled to have him because he knows and loves Chautauqua so much, and he is a virtuoso on the organ,” she said. “We could have never found a more talented person.”

Stafford was in this position last year, but for a much more condensed, online-only version of the service as all in-person events at Chautauqua were canceled due to the COVID-19 pandemic.

“I’m probably most excited about the return of congregational singing,” Stafford said. “To actually hear hymns sung in the Amphitheater by hundreds or thousands of people is pretty exciting. There’s no feeling quite like that.”

Although the service will look different than pre-COVID-19 years — two quartets will perform separately or together rather than a full choir for at least the first several weeks — New York State’s recent lifting of COVID-19 restrictions eliminated several obstacles.

Stafford said they considered masking singers. Robinson said they needed to follow social distancing guidelines for singing, which meant keeping people 12 feet apart, in accordance with New York guidelines. Before that restriction was lifted, he said options were sparsely filling the 4,000-seat Amp or telling the congregation not to sing.

“We were all just wincing at the notion we would gather all these people and tell them not to sing,” Robinson said. “It just seemed crazy.”

Although Stafford said it was strange to feel excited about quartets replacing a choir, he is grateful they can at least have that given the previous expectations.

“It’s such a relief to be able to relax some of that now and look forward to maybe returning to something that looks like the normal Chautauqua Choir later in the season,” Stafford said.

Robinson is expecting a return full of high energy, appreciation and increased gratefulness.

“If you do the same thing year after year, you begin to take it for granted,” he said. “The privilege of being able to come here and gather each summer, I think, is no longer going to be taken for granted because, as we saw last year, even something with a 145-plus year tradition can be halted by something like a pandemic.”

Stafford is hopeful it will feel like a proper return to Chautauqua.

“I just want people to feel like they’re back at home,” he said.