At 9 a.m. on Saturday, July 17, The Chautauqua Property Owners Association general meeting took place in the Hall of Philosophy, followed by the Institution’s Leadership Open Forum.

The CPOA currently has over 700 members and is actively engaged in supporting homeowners, while simultaneously facilitating a sense of community here in Chautauqua.

At the general meeting, the CPOA discussed the nomination of a Class B trustee candidate for the Institution’s board of trustees election in August.

As laid out in the 1902 Chautauqua charter, four of the 24 members of the Chautauqua Institution Board of Trustees are elected to the board by a vote of members of the Chautauqua Corporation, or property owners (one vote per property). These four members are classified as Class B trustees, though there is no substantive difference in their participation on the board. While any corporation member can run for these elective seats, the candidate nominated by the CPOA is typically elected.

“As a member of the nominating committee, we originally had 14 people that showed interest in becoming the Class B trustee,” said Paul Perry, CPOA president and committee chair. “We ended up interviewing 10 people before we decided on Rick Evans.”

Perry further discussed the nomination process as a member of the nominating committee, as well as the benefits of CPOA membership.

“We found (Evans) was a strong candidate, he has a real understanding of how the Institution works,” Perry said. “He has a focus on property owners and their concerns, as he has been on the grounds in Chautauqua for around 30 years — he gave us confidence that he would be a good trustee.”

The CPOA also serves as a voice of advocacy in Chautauqua — relaying major issues and concerns to Chautauqua’s property owners toward the goal of information and education.

“We were really excited about the level of community involvement and applications received for the Class B position, with the most applications we have ever had,” said Erica Higbie, CPOA secretary. “It is a huge indication of interest in the community, as well as the CPOA in general.

The open forum featured a presentation by John Shedd, Chautauqua’s vice president of campus planning and operations, with representatives of The Jefferson Project on Chautauqua Lake.

Institution President Michael E. Hill announced that he had signed the new lake Memorandum of Understanding (MOU) with several other lake entities. Hill said he signed it because he believes “that collaboration is crucial” to reversing the negative trends on the lake.

“We hope to potentially forecast when we are going to see harmful algal blooms, large algal growths on the lake,” Shedd said regarding the project. “(This will) help us to determine if there is a way to mitigate those actions of the lake and make the lake water better and improve it.”

Concerns and comments alike are gathered and used towards research for Chautauqua’s renewed promise 150 Forward, the strategic plan for the Institution.

Members of the board invite Chautauquans to engage with trustees at any time by adding suggestions at one of the open forum meetings or by contacting the administration. 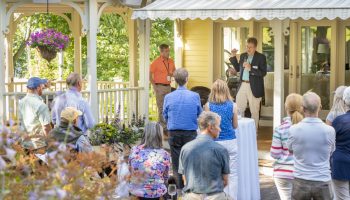