Each year, the Chautauqua Piano Program’s Piano Competition allows School of Music students to come together and showcase their talents. After the finalist competition Thursday afternoon, held both in a private recital in Elizabeth S. Lenna Hall and on Zoom, the three winners — Andrew Chen, Charles Berofsky and Jung-eun Kim — will perform for the Chautauqua audience at 2:30 p.m. Sunday, July 9 in the Amphitheater.

The preliminary rounds occurred on Monday, where five out of 17 students were selected to play in the final round Thursday. These five finalists were Alexei Aceto, Fantee Jones, Berofsky, Chen and Kim.

The judges at the final round on Thursday were Brian Preston, artistic director of the Thousand Islands International Piano Competition in Cape Vincent, New York; Richard Sherman, Rita and Dunbar VanDerveer Symphony Principal Chair for Flute in the Chautauqua Symphony Orchestra; and acclaimed pianist Lydia Artymiw, who has won numerous awards including the Kosciuszko Foundation Chopin Competition and the Andrew Wolf Chamber Music Award. Preston and Artymiw both listened in on Zoom.

“I would be lying if I said that it’s the same,” Preston said, but the remote nature of his participation “definitely did not get in the way of hearing the contestants. A person can totally sense the honesty and sincerity with which the performer is creating their art. Inaccuracies of notes and rhythm are always apparent.”

Because the streaming process was “done so extremely well,” according to Preston, little was lost to the two judges who were not in Lenna. Sherman was able to fill in some information about projection of sound and tonality, since he was attending in person.

After a virtual season last year, this competition means that much more to the participants. It’s a chance for young musicians to have an experience to learn from one another and be able to create music onstage once again. For the Piano Program, even though this experience is technically a “competition,” with prize money split between three winners, co-chairs Nikki Melville and John Milbauer don’t exactly see it as being so black and white.

“Part of the prize is just being able to form these relationships and being able to come back to the stage. The truly lovely part of it all is that they’re so supportive of each other,” Melville said. “We don’t see everything as a competition. It’s just an important way for them to learn more about performing and learn more about themselves. It’s also a great community builder.”

Of the five pianists that played on Thursday, third place went to Jung-eun Kim and second place went to Charles Berofsky. First place was awarded to Andrew Chen after he executed five of Rachmaninoff’s Etudes-Tableaux, Op. 33, and Ravel’s Miroirs: Une barque sur l’océan. Each winner will receive prize money provided by donors who were able to attend Thursday’s competition virtually. The audience on Sunday will get to hear the entire winner’s program that Chen performed on Thursday. Berofsky and Kim will perform parts of their program, as well.

A native of Staten Island, New York, and currently a senior at the Eastman School of Music, Chen began playing the piano at 8 years old. Chen chose the program he performed on Thursday as each piece meant something special to him.

He said the set of études was inspired by his instructor at Chautauqua, Alexander Kobrin.

“They are really close to my heart, and I can really feel it when I’m in the moment,” Chen said.

Chen included the Ravel as it contrasted other pieces he had played in the past.

“This piece has always been very close to me. It’s very different,” he said. “It’s not flashy. It’s all about affect.”

Winning the competition required Chen to play under immense pressure. However, he said he didn’t let that bother him.

“I try to remind myself to just enjoy the music and have fun,” Chen said.

Chen said he was shocked, yet grateful, when his name was announced as first place.

“I really wasn’t expecting to win. I was just expecting to play, have fun and be done after. I’m just in shock,” he said. “I just feel so thankful that now there’s an opportunity to get back to normal. It’s nice to be able to interact with people and other musicians again who are amazing pianists. It’s very inspiring, because it motivates you to work hard and pursue passion.”

This passion did not go unnoticed by Thursday’s judges.

“The first place winner captured me right from the start. Once you are listening to someone who has your attention, it becomes more difficult not to want to continue to listen,” Preston said. “If they don’t capture you at the start, then it takes a lot to get them into your court, so to speak. This pianist was one of two who I thought controlled the piano very well and made me listen.”

The three judges were looking for certain things while listening to Thursday’s performances.

“In a competition, I always listen for a musician (or) pianist who I would want to hear again,” Preston said. “In a sense, I am choosing someone I would consider paying money to hear. Of course, they must demonstrate accuracy to the musical score, and for me, one of the biggest parts of that is choosing a pianist who has great rhythm. The other parallel quality required a performance that has deep meaning and personal commitment, without stepping on the toes of the composer.”

Artymiw was also looking for these qualities in each player but sought out others, as well.

“Most important for me was their sound,” she said. “Could they produce different layers of sound (making the piano orchestral) and could they create a beautiful, singing tone in the lyrical passages? A very broad dynamic range is also one of the most important elements in a great performance. This especially applies to playing softer. It’s always easier to play louder, but being able to play very softly and still project all of the notes requires great control — and finally, would I want to hear this pianist again?”

Judges said the talent was evident from all five pianists.

“The competition was fierce, because all the programs were diverse and reflected the personalities of each pianist,” Sherman said. “These decisions are always highly nuanced.”

Each pianist, the judges said, represented the talent that the Piano Program has as a whole.

“I would like to extend my warmest congratulations to all five pianists who performed today,” Artymiw said. “It was a joy and privilege to hear these exceptional artists. I would also like to congratulate their wonderful teachers. For many years, the Piano Program at Chautauqua has been highly regarded as one of the top summer music programs in the world. Today’s Piano Competition certainly was a testament to Chautauqua’s excellence, the very high quality of the students, and the superb training they are receiving.” 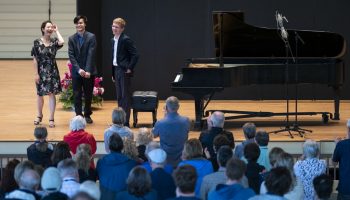