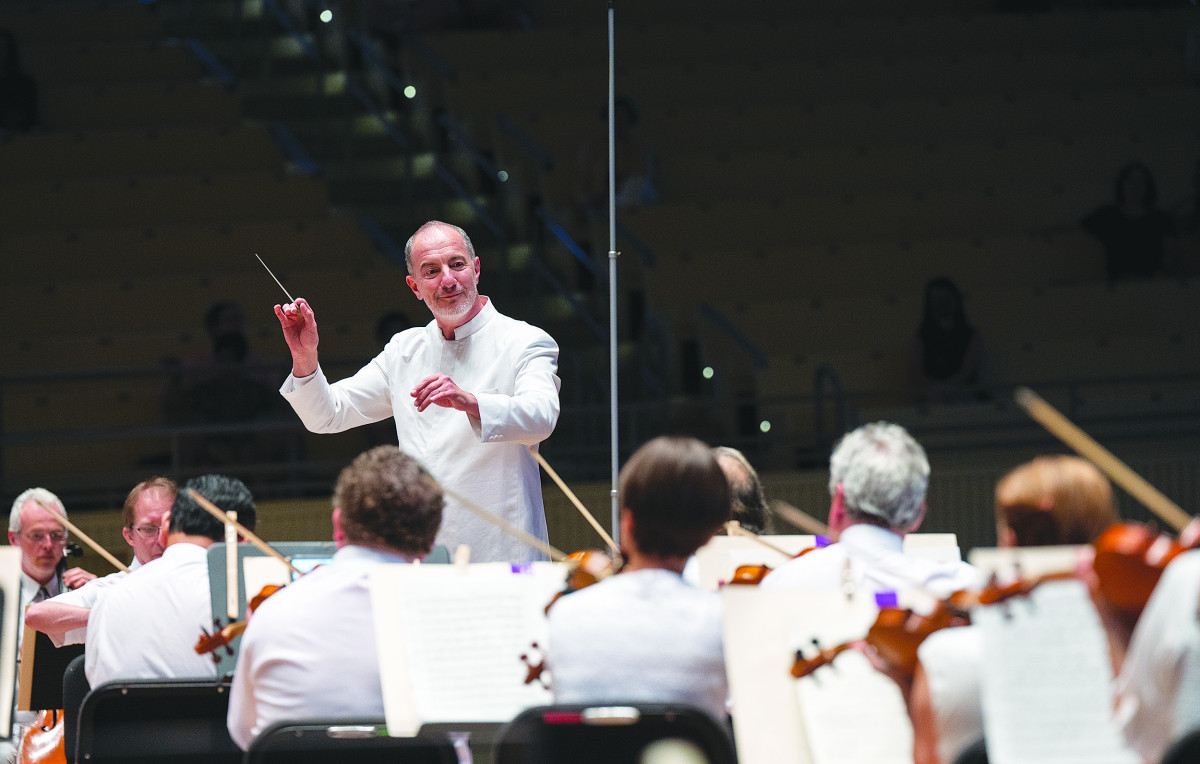 After a year of virtual-only performances in 2020, and a shorter schedule with smaller groups of musicians in 2021, summer 2022 represents a full return to the Chautauqua Institution’s largest stage for the Chautauqua Symphony Orchestra — and it all begins tonight.

Under the baton of Music Director Rossen Milanov, now in his eighth season at the helm of the orchestra, the CSO will kick off their summer at 8:15 p.m. Thursday, June 30, in the Amphitheater, with a program that is both timely and sweeping but, most of all, joyful.

“This celebratory opening of the CSO is particularly joyful as we return to a full season of soloists and repertoire selected to inspire, comfort, engage, introduce, challenge and most importantly — to gather us together to listen and enjoy in a shared space,” said Deborah Sunya Moore, senior vice president and chief programming officer.

The evening, and the CSO’s 2022 season, opens with the National Anthem, composed by John Stafford Smith and arranged by Walter Damrosch. “The Star-Spangled Banner,” penned first in 1814 by Francis Scott Key, was officially made the anthem in 1931; but it was President Woodrow Wilson’s U.S. Bureau of Education that tasked a small group of musicians, Damrosch among them, to agree upon a standardized version and official designation. Even earlier, it was one of Key’s relatives who realized the cadence of the poet’s stanzas fit the melody of an already-popular tune from the late 1700s: Smith’s “The Anacreontic Song.”

The composition the CSO will play tonight draws on all of these sources. Immediately following the playing of the National Anthem, those sources feed into yet another, with composer Jessie Montgomery’s 2014 work “Banner,” which is a tribute to both “The Star-Spangled Banner,” and the Black National Anthem: “Lift Every Voice and Sing,” by J. Rosamond Johnson and James Weldon Johnson. The two songs share the same phrase structure, Montgomery has noted.

It’s a program coupling Milanov is eager for Chautauqua to experience.

“I’m so much looking forward to the drumroll of the National Anthem,” Milanov said, and then noted the shift the program represents. “Jessie Montgomery’s ‘Banner’ reimagines ‘The Star-Spangled Banner’ by infusing it with multi-cultural elements that pretty much mirror the rich tapestry of cultures in present-day America.”

Montgomery is an acclaimed composer and violinist, whose honors include the ASCAP Foundation Leonard Bernstein Award and the Sphinx Organization’s Medal of Excellence.

In 2009, she was commissioned by the Providence String Quartet and Community MusicWorks to write “Anthem,” to mark the 200th anniversary of Key’s poem, and as a tribute to President Barack Obama’s election. That work is among numerous other commissions, and Montgomery told Cincinnati Public Radio — following the 2022 Cincinnati May Festival, where another piece, “I Have Something to Say,” was performed — that her booked schedule “represents an overall interest and investment in American music, and what young American composers have to offer.”

Following “Banner,” the CSO’s evening concludes with Finnish composer Jean Sibelius’ Symphony No. 2, which Milanov called a “defiant” work that is “patriotic and triumphant.”

“It’s a fitting opening, displaying the power, virtuosity, and emotional depth of our orchestra,” he said.

In a later addition to the evening’s program, the CSO will perform Edward Elgar’s Nimrod Variation, in honor of several CSO musicians who have passed in the last year, including percussionist Ron Barnett, who was with the CSO for 56 years; Fred Boyd, tuba player of 35 years; clarinetist Ray Schroeder, whose tenure was 44 years; Marie Shmorhun, cellist for 49 years; and Chaim Zemach, cellist of 44 years.

Milanov said the CSO can’t wait to share a full schedule of “meaningful musical experiences” with Chautauqua this summer.

As it prepares to open its summer season, Moore had one wish for both the orchestra, and Chautauqua.

“May this opening night,” she said, “begin a season of orchestral music that makes our lives more complete and more beautiful.”