When an ex-intelligence officer addressed Stanford University, with Kathryn E. Stoner in the audience, he said that “Russia belongs at the little table with North Korea in international affairs.”

Stoner found it a shallow misunderstanding of Russia’s competence and power. This reaction is the basis for Stoner’s 2021 book Russia Resurrected: Its Power and Purpose in a New Global Order, which explores the subtle factors of Russia’s influence.

“We should think of state power in a broader way than just population size, the size of an economy, and the size of the military,” Stoner said “Russia isn’t a leading power in any of those measures, yet has a lot of influence over other countries.”

At 10:45 a.m. Wednesday, June 29, in the Amphitheater, Stoner’s lecture “Russia Resurrected: Its Power and Purpose in a New Global Order” will address Russia’s recently employed post-Cold War politics in Ukraine, and how the United States can most successfully navigate these unprecedented geopolitics.

At Stanford University, Stoner is a Mosbacher Director of the Center on Democracy, Development, and the Rule of Law, and senior fellow of the Freeman Spogli Institute for International Studies. She has held fellowships at the Woodrow Wilson Center and at Harvard University, where she received her doctorate in government.

The opening section of Stoner’s new book examines the “soft, sharp and ‘smart’ powers” of Russia’s pervasive threat in Ukraine. This is done through a theory Stoner has coined as “dimensions of power” that encompasses men, the military and money.

“I look at things like control over energy pipelines, not just proceeds from sale of energy assets like oil and gas, as being power tools of a new Russia,” Stoner said. “For too long, we have looked narrowly at Russia’s power assets and have consistently underestimated it while focusing on China. But look at where the threat of global war is coming from today.”

Throughout her book, she details motivations under Putin, how the Ukrainian conflict is the decade-long culmination of Putin’s policies, and how the Western world fits in this conflict.

“Western conflict with Russia isn’t inevitable or structural, but dependent on the nature of the domestic political regime in Russia,” Stoner said. “If Russia wasn’t governed by a personalistic authoritarian, then its foreign policy may well be different.”

While she began work on her book six years ago, recent and pressing developments in Europe haven’t changed her research, but reinforced it.

“The book had followed the longer term trends of Russian political and foreign policy development, and alas, those haven’t changed fundamentally,” Stoner said.

This lecture fits within Week One’s theme of “What should be America’s Role in the World?,” in which featured speakers will discuss not only the United States’ politics, but the influence of geopolitical issues, as well.

“It felt appropriate for us to dedicate a week to this larger question of not only America’s role on the world, how America shows up in the world and in larger geopolitical issues, but how different foreign policy approaches affect that larger issue,” said Matt Ewalt, vice president and Emily and Richard Smucker Chair for Education.

Ewalt said that numerous Chautauquans requested Stoner for programming in the 2022 summer season, as she has become an important voice on Russian foreign affairs.

“It was an obvious area of focus for us — her particular expertise and analysis of the impact Russia had, can have, and has had on larger international politics and in power,” he said.

Stoner continues the topic of Ukraine and Russia following both CNN journalist Fareed Zakaraia’s lecture on Monday, which touched on the fall of the Soviet Union, and Brookings Institution’s Constanze Stelzenmüller’s Tuesday lecture about Putin’s war.

Stoner is the author or co-editor of six books, all with the focus of examining Russia’s extensive, complex history of politics.

As the war continues, Stoner hopes the United States can curb conflict with support.

“We have to keep our European partners in particular on board with sanctions, continue to deepen those sanctions, and continue to support Ukraine militarily and economically,” Stoner said. “It really is on the forefront of the battle of democracy versus autocracy.”

Stoner eagerly anticipates her lecture today and is excited to hear from inquisitive Chautauquans.

“I look forward to hearing from the audience and fielding what I anticipate will be great questions,” Stoner said. “I think we are seeing a reshaping of global politics in a radical way. The current and future U.S. administrations will need to think creatively to reestablish U.S. leadership.” 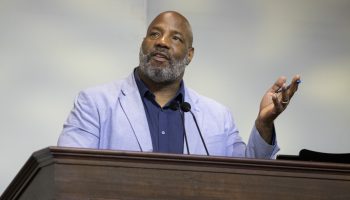 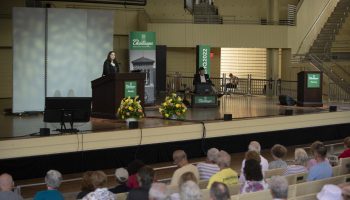 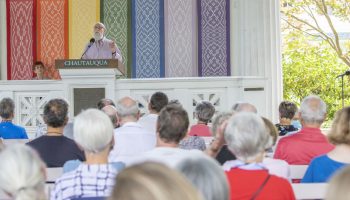 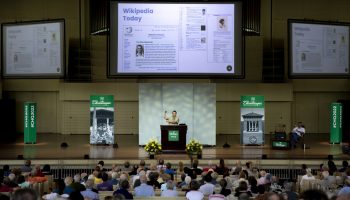 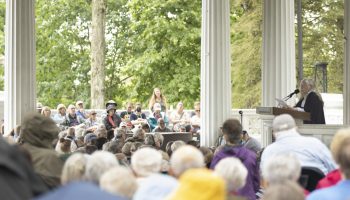