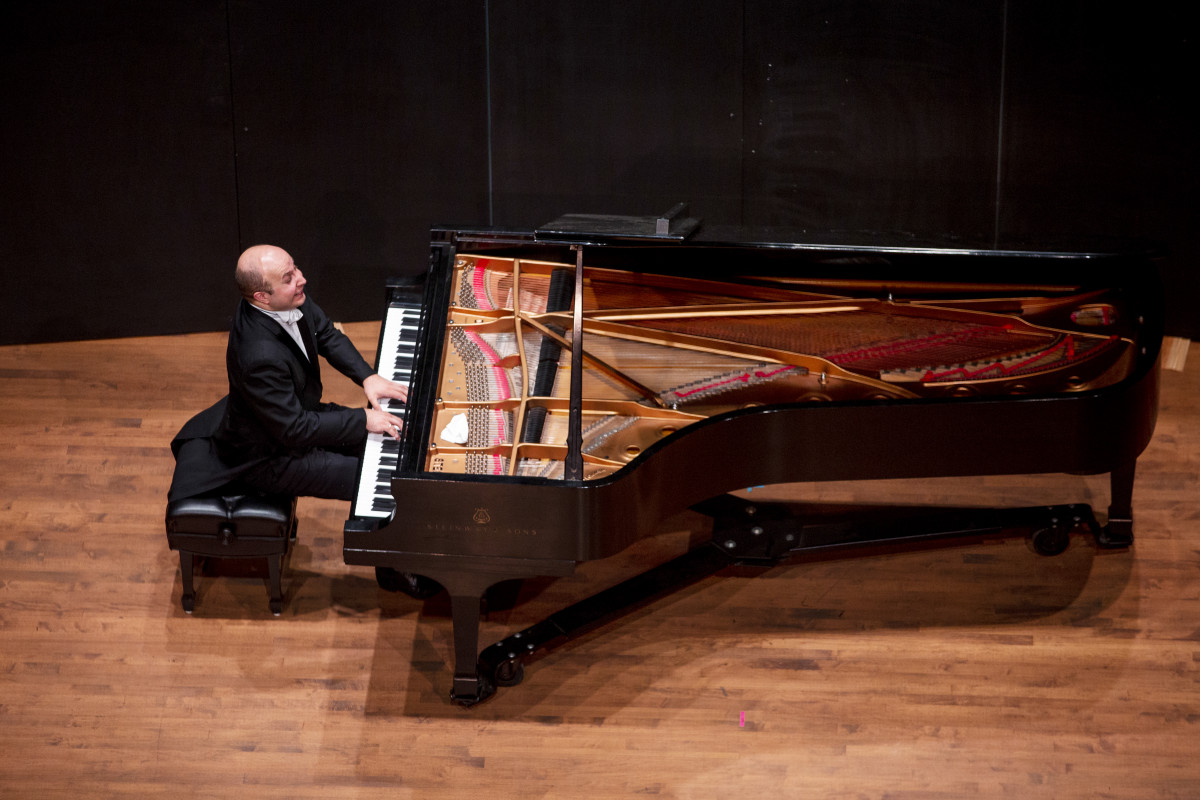 It’s Alexander Gavrylyuk’s goal to connect the tragedy of the crisis in Ukraine to the tragic undertones in his music.

His concert at 8:15 p.m. Wednesday, June 29, in the Amphitheater will start with “Moonlight Sonata” by Beethoven, said Gavrylyuk, a Ukrainian-born Australian pianist.

Gavrylyuk said he can’t help but draw parallels from the strength of spirit in the music for tonight’s concert and the strength of the Ukrainian people’s spirit. He will perform a selection of piano pieces from composers like Franz Liszt and Frédéric Chopin. Part of the evening’s single-ticket revenue will be donated to the International Rescue Committee for relief efforts in Ukraine; for Chautauquans with gate passes, the evening’s printed program will have a QR code that links to the organization page.

For Gavrylyuk, the fight in Ukraine is personal; the recent shelling of the Ukrainian city Kharkiv impacted someone close to him.

“My father, a few months ago, just narrowly escaped the bombardment there,” he said. “Thankfully, he’s just joined us in Sydney, in Australia.”

Aside from the Beethoven, Gavrylyuk, who is artistic adviser and artist-in-residence of the Chautauqua Piano Program, said he plans on performing works by Robert Schumann. The Kinderszenen Op.15 “Scenes from Childhood,” by Schumman, he said, also reflects “purity, sincerity and innocence.”

“It’s a very pure work,” Gavrylyuk said. “It speaks about the untamed joy of childhood and life altogether. By the end of the Kinderszenen, we hear the reflection of the adult mind perhaps, and the philosophy of looking at the child and its innocence and serenity.”

This piece, Gavrylyuk said, is in total contrast to “Moonlight Sonata” and its inherent “strength of spirit” that said he plans to open the concert with.

Third up is a tarantella by Franz Liszt from “Venezia E Napoli,” S.159.

“The tarantella is a very virtuosic dance that would take place after one was bitten by a tarantula, if you can believe it,” he said. “It’s very much a ‘firework’ kind of work, this tarantella.”

Along with a portion of single ticket revenue being donated to the IRC, Gavrylyuk has made personal efforts to support the Ukrainian people and said he tries to do what he can to help.

“I’ve tried to do some charity work in the past few months to help the Ukrainian people, and to help those whose homes were destroyed and who need financial help,” he said. “This concert is an opportunity to further those efforts.”

Gavrylyuk said he’s grateful this concert has been made possible

“I have so much joy and gratitude to share this special moment with Chautauqua in particular,” he said. “I love being here, I love the philosophy here and the openness of vision and ideas. This couldn’t be a better place to share the magic that was created by those composers.”

Marlena Malas, now in 43rd year, to give public masterclass for Opera Conservatory