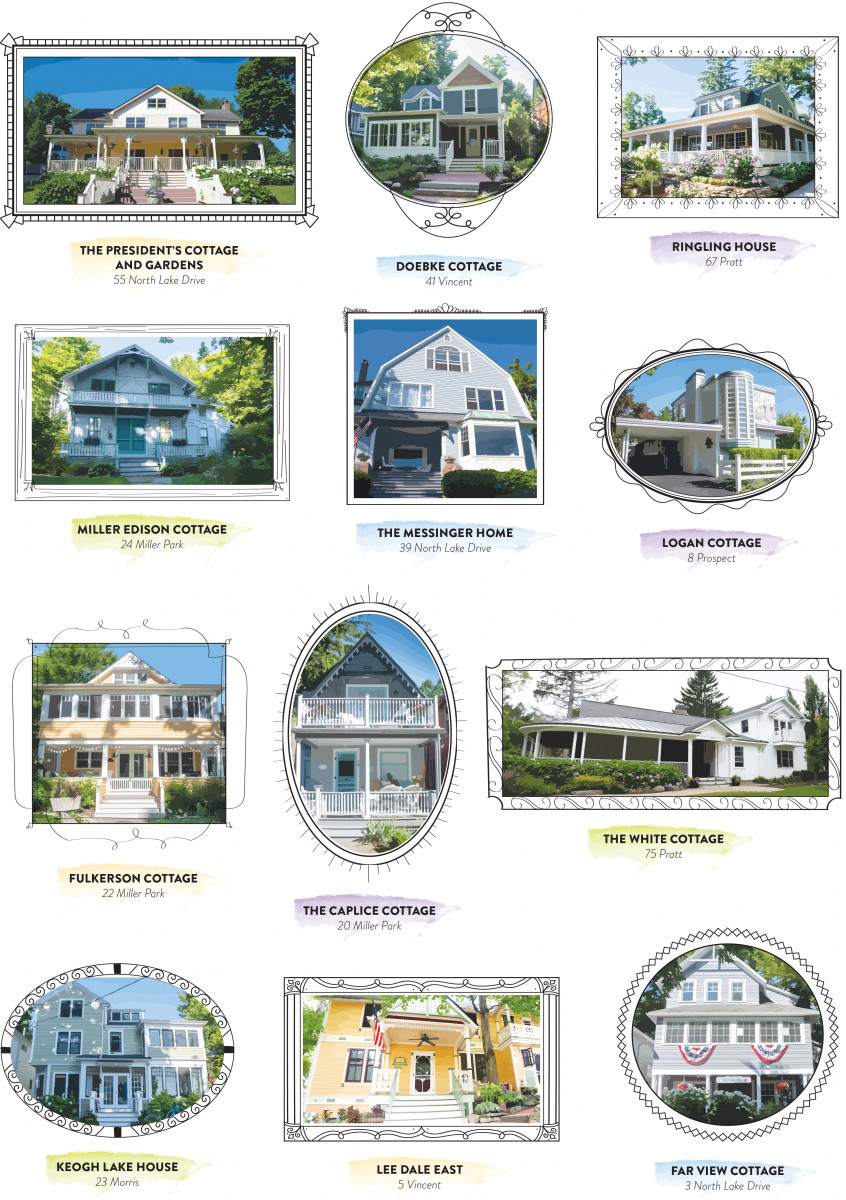 There is no place like home and its steady, constant comfort, especially in the ever—changing architectural evolution of a place like Chautauqua.

While often described as a halcyon of the Victorian Era, Chautauqua’s architecture spans centuries of influential periods, such as Carpenter Gothic, Federal, and French Second Empire styles. In recent years, the homes of Chautauqua have also welcomed modern influences in refurbishing or restoring their historic houses.

The Bird, Tree & Garden Club’s 2022 House and Garden Tour runs from noon until 5 p.m. today throughout the Institution. Visitors must have a ticket to participate in the event, during which they can walk through the homes and gardens themselves or follow tours led by docent volunteers.

BTG began its biannual House and Garden Tour in 1954, headed then by Mary Rappole, for the sole purpose of funding their programming throughout that season. In 2014, Mary’s daughter Rosemary Rappole took on the role of BTG’s House and Garden chair and has been planning the event ever since.

Rappole says that convincing people to let strangers walk through their homes is not typically an easy task, and with COVID-19 still persisting, the event was even more difficult to plan. To mitigate risks, House and Garden Tour ticket holders must show their vaccination cards at the main gate to receive a green wristband that allows them full access to the tour.

Four years after the last tour in 2018, the 2022 House and Garden Tour will feature 12 homes across the Institution, as well as tours of six public gardens from over 200 docent tour guides.

Below is a brief description of each of the featured houses for the 2022 House and Garden Tour to provide insight into the historical and architectural importance of the chosen homes.

The Chautauqua Assembly first leased the 41 Vincent property in 1884 to Mrs. Ida Weir for 99 years for only $150. A series of owners followed Weir, including Howard and Martha Akin in 1942, and Herbert and Emily Schultz in 1958.

The Doebke family purchased the home in 2016, commissioning architect William Laubscher to preserve the historical merit of the cottage while also updating the home to meet community standards. Over the past few years, a new cedar siding replaced the original and a front porch was constructed, as well as entirely new electrical, plumbing and mechanical wiring.

The vibrant yellow exterior of Lee Dale East not only honors its original Queen Anne style, but reflects owner Debbie Currin’s love for art and color. The inside of the home is replete with Debbie’s artistic projects,  featuring over 500 tiles she handpainted and salvaged items from the original 1895 house build.

After renting for five years, the Currins bought the property in 1970 and have overseen major renovations that include the addition of two bedrooms and a full bath on the ground floor. The patio was constructed in 2006 and extended in 2017 with a “privacy planter” that allows the Currins privacy from the sometimes-busy Vincent Brick Walk.

Debbie says her favorite memories in Lee Dale East are of watching her daughters grow up there, and now her grandchildren who come to visit.

The Miller Edison Cottage, registered as a National Historic Landmark, is a home crucial to Chautauqua’s history, housing prominent guests since its 1875 construction. It was home to Lewis Miller, co-founder of Chautauqua Institution, and welcomed guests such as President Ulysses S. Grant. In 1886, Mina Miller Edison Lewis Miller’s daughter, married Thomas Edison — who occasionally spent summers in Chautauqua with the family.

This cottage is unique to Chautauqua, yet not one-of-a-kind; Miller had pre-cut and fabricated parts of the Carpenter Gothic style cottage to replicate his home in Akron, Ohio, and transported them to the Institution, making it one of the first prefabricated houses of its time.

The Institution was able to purchase the Miller home from the Miller descendants in 2015 with a philanthropic gift from Tom Hagen. The National Historic Landmark is undergoing a restoration to the original early 1920s garden plans of landscape architect Ellen Biddle Shipman.

“The front porch is very special, as it’s quite large and has an amazing view of the park and the lake,” Jean said. “We see all of Chautauqua pass by at some point. It really functions as our living room during the season.”

The house was built on two lots of land in 1871, later combined by Ophelia J. Fleming in 1914. The Flemings were the first to own the cottage, passing through five families before the Fulkersons purchased 22 Miller Park in 2011.

In the 20th century, all porches were enclosed, and the Fulkersons, with architect Matt Benson, reconfigured the house to create a singular living space and a smaller one bedroom apartment to accommodate their large family gatherings.

The Caplice Cottage has a deep-rooted history with the Institution, just like its current owners Sean and Lynette Caplice. Built in 1875 on an original tent platform by the Rev. W.H. Mossman, the cottage housed governor of Kansas and 1936 Republican presidential candidate Alf Landon, Mossman’s grandson.

While Sean and Lynette Caplice purchased the home in 2016, they are fifth-generation Chautauquans. The Caplices commissioned builder Kraig Sweeney to begin a three-year restoration that included modernizing the first floor with air conditioning, a walk-in shower, and an updated kitchen and bathroom. Although now modernly updated, the Caplice Cottage houses a number of original furnishings signed by Mossman himself.

The blossoming garden surrounding the house was created by Dahlkemper Landscaping, with the aim to create a Victorian style estate complete with five different types of hydrangeas, lilacs, roses and boxwood.

Lynette says she loves to live in a home that has such significance to her family’s history, and often cuts her own flowers from her garden to adorn their front porch.

3 North Lake Drive was first owned by David Stever in 1872, and Far View Cottage was constructed by the Rev. William Clark in 1880. The cottage was owned by several families before landing in the hands of the Gwins in 2005.

The cottage has undergone extensive renovations, the most notable being an emergency house lift in 2010 after a shocking discovery that the cottage had not been sitting on a foundation, but the original timber and brick remnants. The most recent restoration to build a master bedroom suite revealed old newspapers and hay were used as insulation.

Bonnie says her beloved home is not only great for its unique view of the lake, but also for saying hello to passersby on the walking trail in front of her porch.

The Keogh Lake House has undergone several refurbishments to get to its current state. The 1893 house was purchased by Kyle and Liz Keogh from New Canaan, Connecticut, in 2015. The lake view from the porch instantly drew the Keoghs, who also loved the enclosed L-shaped front porch and tall ceilings.

“When we first saw the house, we thought we would open up the porch and remove the windows, but now we’re glad we didn’t, as it’s great to sit out there even in inclement weather,” Liz said.

With builder Kraig Sweeney, the Keoghs modernized the entire interior, which included enclosing the first-floor bathroom, moving the kitchen from the back to the front of the house and landscaping the gardens with native perennials over the years. Their most recent addition was the new back patio and garden last summer.

When Steve Messinger was a teenager working as a lifeguard on Children’s Beach, he thought about how fun it would be to live in the “blue house” that was always overrun with children and friends. In 2015, his dream became reality when he and his wife Claire purchased the 1902 home.

From 1899 to 1901, 39 North Lake Drive was originally owned by the Studebakers, the family of the Chautauqua’s second president, Clement Studebaker Jr. Until 2015, Dr. Bert and Mary Rappole inhabited the cottage but eventually sold it to the Messingers of Arlington, Virginia.

The house takes after the Shingle Style, characterized by the rustic nature of the roofs and asymmetrical porch next to a large bay window. Claire and her daughter Grace designed the interior of the home with items from yard and estate sales, combining antiques with modern pieces to give the cottage a lived-in, yet not “decorated” feel.

Current President Michael E. Hill and his husband Peter M. Korns have modernized the cottage to reflect lakeside living. A library was designed to hold the entire collection of past Chautauqua Literary and Scientific Circle books, and a catering kitchen was constructed to more easily serve dinner for public events. They have also compiled an impressive art collection of contemporary American paintings, with works ranging from Rebecca Kinkead to Donald Saff.

The whimsical “Teacup Cottage” was built in 1950 and bought by Helen Temple Logan just eight years later. Logan was a trustee of Chautauqua, a supporter of the Chautauqua Opera Company, and would donate funds to build the Logan Dormitory for music students in 1965. Helen Logan passed away in 1985, leaving the home to her son Harry A. Logan Jr., who was also a trustee and patron of the arts. When he died four years later, his wife Kay Hardesty Logan took over the home. To honor both Helen and Harry’s passion for music, in 1991 Kay commissioned artist Maritza Morgan to paint a mural of the Chautauqua Symphony Orchestra on an outside wall of the house.

In Kay’s time living in the house, she added an outdoor staircase leading to the upper deck and a glass-tile covering on the outside edge of the cottage. She also added the infamous teacup structure to her front lawn, which is still there to this day. The current owners have left the architecture untouched to honor both the idyllic nature of the home and the history behind it.

Koschik and Hara, with the help of architect Scott Lawson, set out to enlarge the kitchen, add a master bedroom, update the cottage and add a wrap-around porch in 2007. As the project advanced, however, they discovered irreparable damages from mold and critters that required a complete rebuild of the cottage.

Hara and her mother Suzuko Hara have embellished the interior walls of the house with watercolors alongside posters of the Ringling Brothers circus to honor its prior occupants.

The plot off 75 Pratt was first purchased in 1958 by the Rev. and Mrs. Gilbert Watt, who built the pre-cut one-story White Cottage just a year later. In the late 1990s, a second story was added, complete with several bedrooms and a bathroom above a one-car garage.

In 2012, the cottage was donated to the Chautauqua Foundation by the Tate estate, and purchased by David and Daisy Vanderlinde in 2013. Architect Bill Laubscher oversaw the remodel from 2014 to 2015, which included an addition of a wrap-around porch and raising the roofline.

The surrounding gardens of the estate were designed by Andrew Robbins of Westfield Nursery as a college project. The bountiful landscape includes hydrangeas, hostas, perennials and more to attract butterflies and bees alike to the Vanderlindes’ home.

Daisy says while the location and structure of the cottage are aspects her family enjoys daily, the memories made in her home and the joy visitors bring “contributes to the spirit and joy of (their) place.”