Multidisciplinary artist and storyteller David Gonzalez is a former class clown who has found his way back to his silly roots.

“As a musician, I’m a little more introspective, and as a storyteller, I’m an extrovert,” Gonzalez said. “It’s kind of, perhaps, an unusual profile, but that’s just the way it is. Onstage as a performer, I’m a goof.”

Gonzalez will channel that goofy spirit for his return to Chautauqua’s Family Entertainment Series. He will bring his one-man show, “Talking Birds and Golden Fish,” a collection of folktales from around the world, to life at 5 and 7 p.m. Tuesday, July 26, in Smith Wilkes Hall.

In the early days of his career, Gonzalez worked as a music therapist. He used the power of music and creativity to work with people in various states of crisis, from pediatric hospice patients to adults in psychiatric care. He considers himself a social artist.

While working in music therapy, Gonzalez discovered the work of Joseph Campbell, a scholar, writer and teacher of comparative mythology. Campbell’s book, The Hero with a Thousand Faces, theorized the archetypal hero’s journey, a prevalent cross-cultural mythological theme. Gonzalez was inspired by Campbell’s work and began incorporating storytelling into his music therapy practice.

As he dove into the rich canon of world mythologies, Gonzalez, who is of Cuban and Puerto Rican descent, explored his cultural roots. One of his previous shows at Chautauqua was called “Cuento: Tales from the Latinx World.”

“Talking Birds and Golden Fish” draws on a globe-trotting array of folktales, including the Persian story “The Raven and the Pigeon” and the Dominican tale “Margarita and the Golden Fish.” Gonzalez said that these stories reflect universal values such as cooperation and staying true to one’s self.

“These are stories which I love, and I join them together because they’re thematically related,” Gonzalez said. “Right now in my life, I’m working on a few projects which celebrate the natural world. I’m doing what I can to bring attention and care to ecological themes of our time, which are vital and critical.”

“Talking Birds and Golden Fish” features casual and simple staging. Gonzalez will be onstage with a headset microphone, using all of the tools at his disposal to weave his tales.

“I’m very physical, and my little tagline is just funky, fun, physical storytelling,” Gonzalez said. “I call this the poor theater of one, where my voice is the orchestra, my words are the libretto, my body is the dance ensemble, and the goal is to conjure a world.” 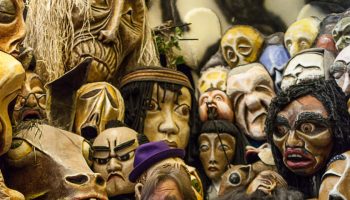