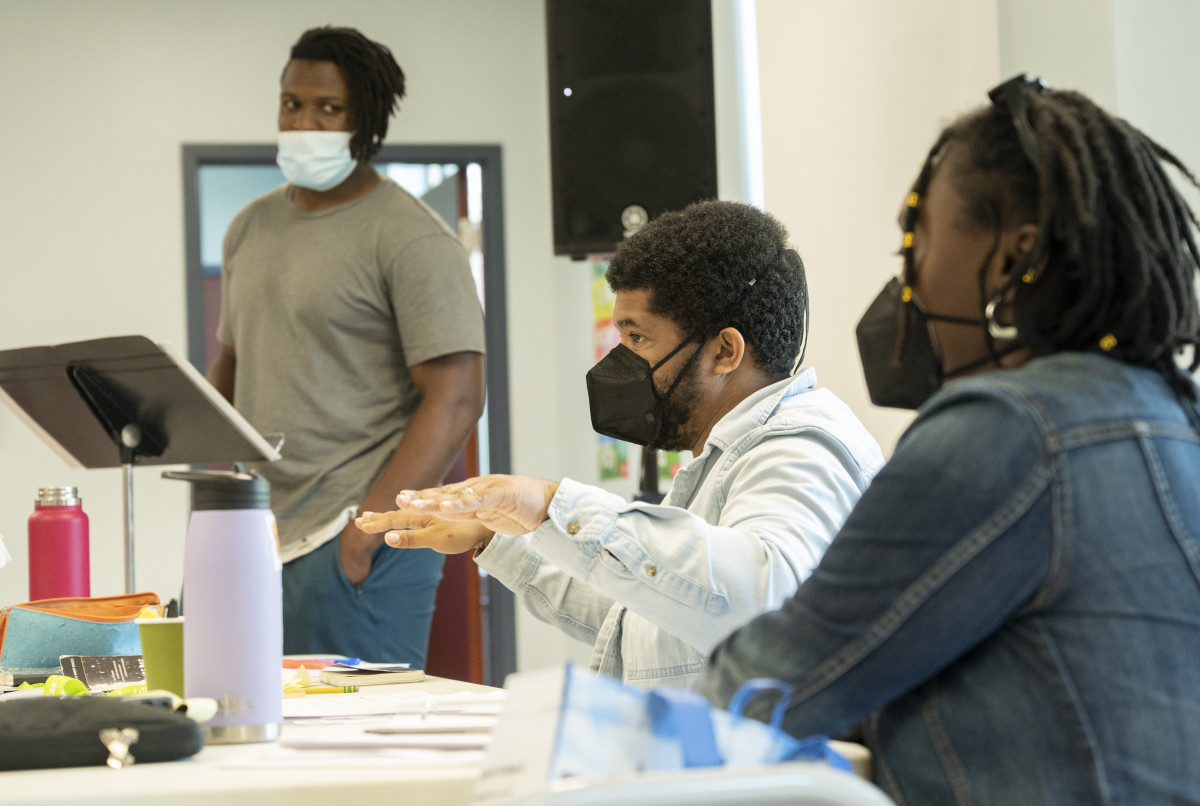 After day four of his rehearsal for the Chautauqua Theater Company’s New Play Workshop of Black Like Me, writer-director Monty Cole’s head was abuzz.

That day, he sat in a circle and got to know his cast, a primarily Black ensemble with one white actor. The company comes from cities across the country — Denver, San Diego, Chicago — and varied stages of their lives: a college graduate as of May, MFA acting students and established working actors. Cole’s head was swollen with their stories, and he identified patterns across their experiences.

“Their relationships to their pasts and to who they are and to their own Blackness is very different because of all those different places they come from,” Cole said. “But then it’s really exciting when we see the patterns across those, as well.”

The play Black Like Me is a response to a 1961 book of the same name, a memoir by John Howard Griffin, a white journalist. Griffin dyed his skin dark in order to pass as Black and investigate the experiences of Black Americans in the Jim Crow South. In the early days of rehearsal, Cole engaged with his cast to receive their reactions and rewrite the script based on those conversations. Black Like Me will premiere at 7:30 p.m. Saturday, July 23, in Bratton Theater, and conclude with two Sunday, July 24, performances: one at 2:15 p.m. and one at 7:30 p.m. in Bratton.

The original text of Black Like Me, which was adapted  into a 1964 film, presents a multitude of thorny questions. Cole, who works from a documentary theater perspective, has invited his cast into the process of grappling with those questions.

“I really love the idea of an ensemble coming together, and us having the space, especially in this room, to build the story along with Monty, and have lots of opinions and lots of curiosities that are taken into account, and that we will hopefully see really shift the narrative,” said Aizhaneya Carter, a CTC conservatory actor. “I think once plays are written, they can codify a moment in time in which the playwright has written this story. So it’s really amazing to be a part of that moment before the codification, before the publication, before it’s set and given out to other people, to really have a say in how my mind and how my experiences shift the story.”

Cole first encountered Black Like Me when he saw a vintage movie poster for it at an antique shop. He recalled that the poster said something along the lines of: “I changed the color of my skin. Now I know what it feels like to be Black.” Cole found the poster off-putting, intriguing and kind of funny, all at once. He compared the experience of reading the book to entering the twilight zone.

“Reading it today, you understand how he’s trying to be an ally to the movement and trying to help Black folks, but also how he’s doing it in this really provocative way that maybe isn’t right,” Cole said. “It’s this weird push and pull of how you’re experiencing the book, and we’re trying to create that same experience in watching the play.”

The current iteration of the play is a revision of its original form, a workshop production that Cole mounted at the California Institute of the Arts in 2019. Cole said that since then, the world has changed dramatically, and the group of people in the room with him at Chautauqua are, of course, different people than the original cast. Cole is rewriting the show to not only incorporate those shifts, but to reflect his own evolving feelings about the material.

An initial version featured cast members staging scenes from the book, then exiting those scenes in order to comment on them. Cole is now trying to resist the rigid distinctions between scene and commentary and instead meld them together.

“The main thing is, we’re trying to allow space for the actors to own the material,” Cole said. “This book is interesting. John Howard Griffin is appropriating the Black experience in his actions, and so it’s almost like the play is trying to appropriate (Griffin) appropriating the Black experience. It’s trying to reframe it so that it’s not a white man telling what it feels like to be Black, but instead it’s us telling you what it feels like to be Black.”

Cole is inspired by Barry Jenkins, who wrote the screenplays for “Moonlight” and “If Beale Street Could Talk.” Cole admires and connects with Jenkins’ attention to Black love and Black vulnerability.

In his own writing, Cole finds himself wrestling with questions he has for himself and dilemmas he’s facing. When he first started writing, he would sit down and pour out his fear on the page.

“I would write out a list of my fears, almost like a stream of consciousness, everything from spiders to hitchhiking in the South,” Cole said. “Black Like Me aligns with hitchhiking in the South, and it’s got to be one of the scariest things I can imagine. I think fear is such a place of vulnerability, and a lot of Americans live from a place of fear right now. There are a lot of times that that fear becomes an inspiration for something else, because that fear either turns into anger, or maybe it turns into vulnerability, and empathy, and a softness ensues.”