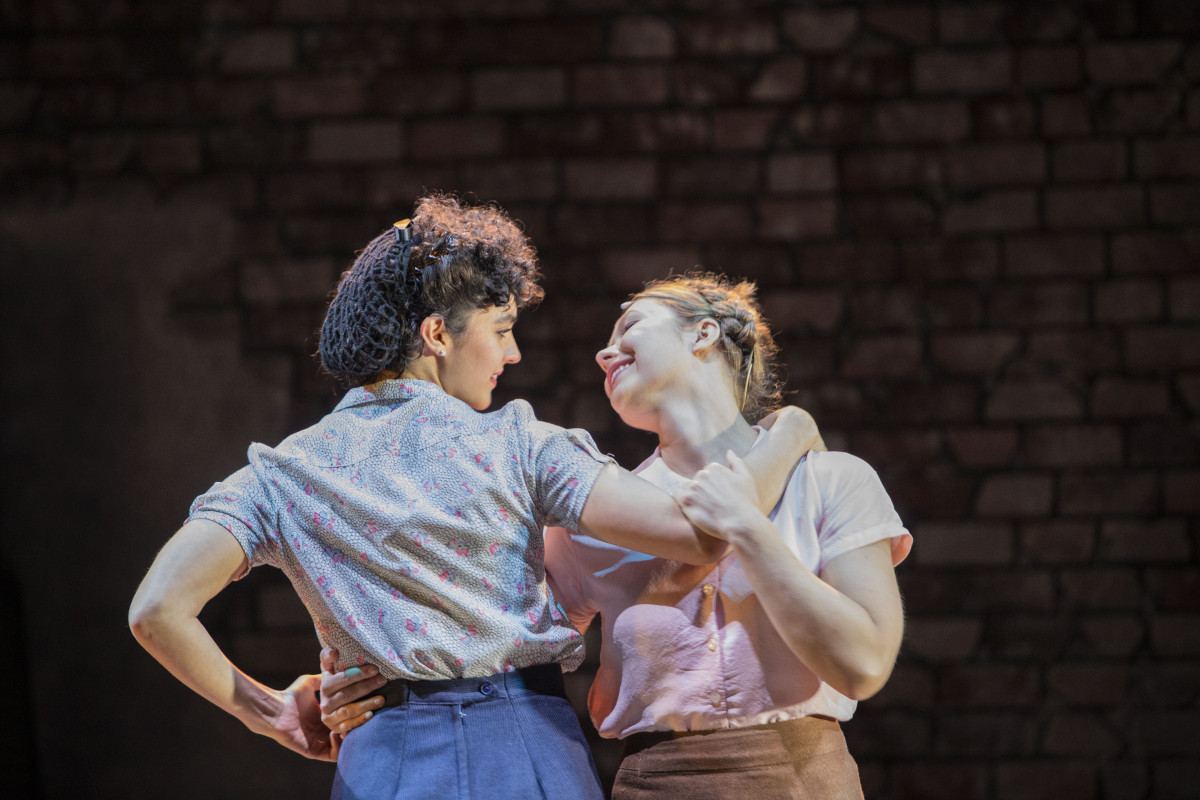 When Paula Vogel, writer of the play Indecent, was a Cornell Ph.D. candidate in the 1970s, she struggled. Sara Warner, the current director of Cornell’s LGBT Studies program, had said that academia was an inhospitable place for Vogel as a woman and an out lesbian. But Vogel found a play called The God of Vengeance in Cornell’s library and began to read; as Warner tells it, Vogel was astonished when she looked up from the pages and found that hours had passed.

“Time had just stopped for her because she couldn’t believe that a play like this existed,” said Warner, who wrote a chapter on Vogel for the upcoming book Fifty Key Figures in Queer US Theatre.

The God of Vengeance, originally written in Yiddish in 1906 by Polish-Jewish playwright Sholem Asch, tells the story of a Jewish brothel owner, Yekel, whose daughter Rivkele falls in love with Manke, one of the sex workers in Yekel’s employ. Alisa Solomon wrote in the Village Voice of Vogel’s discovery of Asch’s play: “The ‘lyricism’ and ‘lack of moralizing’ in the love scene, (Vogel) recalls, bowled her over and widened her sense of possibility for her life as an artist.”

That revelatory moment in the Cornell stacks became the basis for Indecent, which Chautauqua Theater Company is producing this season. The play features a ghostly Yiddish theater troupe telling the story of the writing and production of The God of Vengeance. While Asch’s play was well-received all over Europe and in off-Broadway theaters, it was censored when it came to Broadway in 1923 due to its portrayal of brothels and sex workers, as well as same-sex love. Indecent continues its CTC run at 7:30 p.m. Tuesday, July 5, in Bratton Theater.

As Indecent follows The God of Vengeance across borders and oceans, it exalts the tender romance between the two women, lingering on their love. At the same time, it pays considerable attention to the play’s ill-fated Broadway run.

Jordan Schildcrout, a professor of theater and performance at SUNY Purchase who has written extensively about LGBT people on the American stage (he is co-editor of the aforementioned Fifty Key Figures in Queer US Theatre), said that bringing the play into the mainstream subjected it to greater censorship.

“Within the culture of the time, there was a lot more scrutiny from moral watchdogs on Broadway theater, as opposed to what we might now call the more fringe or off-Broadway theater,” Schildcrout said.

The scrutiny came not just from self-appointed arbiters of morality like the New York Society for the Suppression of Vice, but from the Jewish community. When Asch first read The God of Vengeance in the salon of prominent Yiddish intellectual I.L. Peretz, he and other elders told him to burn it. Rabbis and other influential Jewish figures in New York were distraught at the idea of a work depicting the Jewish people as brothel owners, pimps and sex workers on stage. With pogroms shattering Jewish communities in eastern Europe and rampant xenophobia toward Jewish immigrants in America, these leaders were deeply concerned that material that portrayed the Jewish people in a negative light would stoke the flames of anti-Semitism.

Fueled by those fears, Broadway producer Harry Weinberger insisted on making changes. Among those was the transformation of the relationship between Manke and Rivkele from what Warner described as the purest relationship of the show into something far more odious. Originally, the two women dreamed of running away together, but the altered version showed Manke ensnaring Rivkele into a life of sex work.

“It’s the idea that you can’t show lesbianism without consequence,” Warner said.

Theater historians disagree about whether the lesbian relationship was the most objectionable material, or indeed even the target of the censorship. In Schildcrout’s opinion, the lesbian scene was indisputably the key issue.

“Critics at the time even remarked upon this, although I shouldn’t even use the word ‘lesbian’ because it was considered so inappropriate to even use the term in a public paper,” Schildcrout said. “They had never seen a display of this sort before, and they were outraged by the moral offensiveness of it. And they believed that it could not only bring down the standards of the American theater, but actually corrupt people.”

Warner theorized that when Weinberger reworked the relationship between the two women to be focused on sex work, it was a gambit that backfired. She said that the degeneracy of the brothel was the primary source of concern for the Jewish community.

“I actually think it was anxiety, profound and real and warranted anxiety, about how people would view a play by a Jewish author about debauched Jewish characters,” Warner said. “That was the real anxiety about (The God of Vengeance), and then it took the form of this kind of panic about lesbianism, because the Jewish creatives thought that’s one way they could head it off — by making the lesbianism seem sinister or less than wholesome. And actually it was just a powder keg.”

Regardless of the particulars, the cast and creative team of The God of Vengeance were arrested, tried and convicted of obscenity. The trial, portrayed in Indecent, took place in an era of rising hysteria around so-called sexual perversion and moral decay. New York amended its obscenity law in 1927, which had the effect of banning queer representations onstage.

“What (the law) did explicitly was to say that the representation of what they called sexual degeneracy, or sexual perversion, could not be allowed on the stage,” Schildcrout said. “And one way that theater historians have written about this is to acknowledge that LGBT people were then in this special category, that they were adjudged by the authorities to be too loathsome and morally infectious to be seen even in fictional representations.”

When queer desire was represented, it had to be swiftly condemned and repressed in the form of death or conversion. These laws led to erasure and silencing.

“That’s part of why I think Indecent is not only such a wonderful play but an important play,” Schildcrout said. “It’s reclaiming a queer history that otherwise would be lost, because the dominant mode at the time was erasure.”

Warner said that while it’s taken some time for LGBT theater and life to break into the mainstream, there have always been pockets of unabashed queerness. She points to The God of Vengeance in its off-Broadway form, which celebrated the love between two women, and Harlem Renaissance drag balls, a place of representation and creativity for, primarily, Black male artists.

“There’s, I think, this assumption that it’s been a slow and steady march toward progress,” Warner said. “And that’s actually not true.”

Those pockets of queer existence were destroyed or forced further into hiding as the 20th century marched on.

“There’s a slow process of us going in the closet,” Warner said. “And that has everything to do with purity campaigns, with the Depression, with two world wars and conservative factions like McCarthy.”

The 1950s and 1960s brought a revolution in the way theater was produced, with a proliferation of fringe theaters. This was the era of Caffe Cino, which Schildcrout said was hailed as “the birthplace of off-off Broadway,” where gay theater flourished, as well as the beat poets, who spoke openly about queer desire. It was the era of the homophile movement, so named to avoid the pathologizing connotation of “homosexual” and to focus instead on love.

“It grows slowly, hand in hand, artistry and activism, to create the possibility for things like The Boys in the Band, which was a show about gay characters prior to Stonewall, and Jane Chambers, who would have been the first lesbian to be on Broadway had she not died of cancer,” Warner said.

The Boys in the Band, which ran for 1,000 performances off-Broadway and is widely regarded as the first commercially successful play to feature gay men, was written in 1968. Vogel’s discovery of The God of Vengeance at Cornell came soon after. There were no gay and lesbian studies in academia at the time. Warner said that when Vogel’s original dissertation was not accepted, she left school. She submitted Indecent for her Ph.D. thesis at Cornell and earned her doctorate nearly 40 years after her initial pursuit of the degree.

Indecent was, in 2017, the first time that one of Vogel’s plays was produced on Broadway, although her previous work had garnered great critical acclaim and a Pulitzer Prize.

“The fact that Indecent finally comes to Broadway stage, this beautiful story, and reclaimed this history — Paula Vogel is part of that journey towards mainstream Broadway recognition,” Schildcrout said.

One of the things that moves Warner most about Indecent is its depiction of resilience, of LGBT people, of immigrants, of the Jewish people.

“It’s hopeful without being naive,” Warner said. “And the thing about art is, if we can dream it, and we can stage it, then we might be able to live it in the real world.”