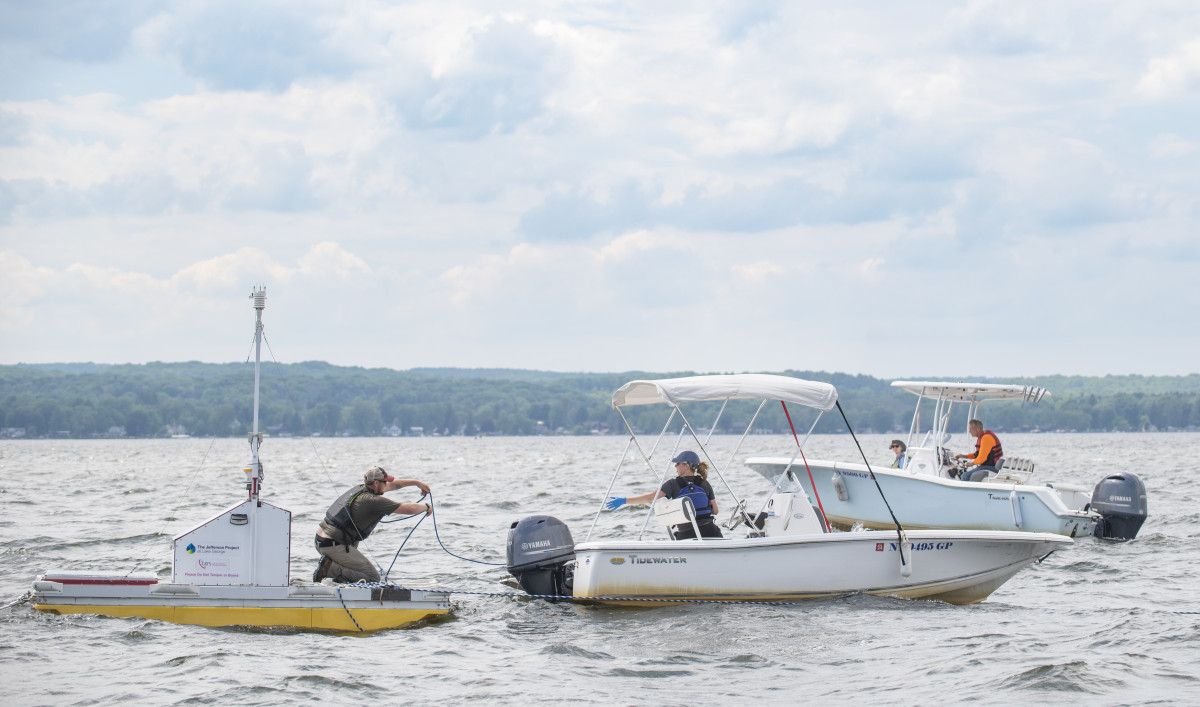 A week-and-a-half ago, a small, yellow boat departed the shores off of Prendergast Point to deposit two new sensors in the north and south basins of Chautauqua Lake. These new sensors, created by the Jefferson Project at Lake George, will enable the Institution and the surrounding Chautauqua community to better understand the threats to the endangered lake and to find a solution to the lake’s health.

The Jefferson Project is a technological, collaborative project with the Rensselaer Polytechnic Institute, IBM Research and the Lake George Association that aims to study lake water and mitigate human effects that harm bodies of freshwater. Established in June 2013, the initiative began to understand the pervasive threats of harmful algal blooms, invasive species and excessive nutrient deposits that impaired the health of Warren County’s Lake George, in New York.

The HABs in the lake pose a threat to its ecology, suffocating the wildlife beneath the surface while depleting oxygen from the water. The bacteria can also cause mild cases of flu-like symptoms in humans, along with fever and skin and eye irritations, but even while HAB clusters are present in the lake, the water is safe for recreational use in the summer.

Excessive nutrient inputs from inland sediment and rain run-off also contribute to the endangered status of the lake, as mass amounts of phosphorus and nitrogen feed HAB growth.

Within their pilot year at Chautauqua Lake, the Jefferson Project has made strides in laying the groundwork for understanding HABs and excessive nutrient deposits in the southern basin of the lake. They have deployed vertical profilers, or VPs, in both lake basins that monitor water circulation and weather conditions from the bottom of the lake to the top.

“There’s two things that happen,” said Stantec senior associate Dwight Harrienger. “There’s this sensor that takes automatic readings, and then every two weeks actual water samples are taken in spots around the lake. Together, the data is used, and it’s very helpful to have both.”

The VP sensors monitor the lake’s pH, temperature and nutrient levels from the surface to the bottom of the basins multiple times throughout the day. These measurements are used to curate an expansive data set that will permit the Institution and its partners to make informed decisions in addressing lake health.

The collaborative efforts from the past two years with the Jefferson Project give Shepherd and his colleagues access to the depth of data necessary to make change; he said this will only improve with time.

“As we get more and more years under our belt, we’re going to better understand certain aspects of the data that comes from the political proposal that can be combined with other things that we’re trying to work on, such as data frames, tributary streams and rivers,” Shepherd said.

A $1 million investment from the Institution and a county coalition allowed the Jefferson Project to continue its research at Chautauqua Lake beyond the pilot year and into 2021.

Chautauqua President Michael E. Hill said that the Institution’s partnership with The Jefferson Project is just the beginning of mitigating lake issues.

For the first two years of the Institution’s collaboration with the Jefferson Project, it worked on  a year-to-year basis. It just agreed to a five-year plan that will allow for “actionable science,” and collaboration between county officials to move from science to solutions, Hill said.

“The floating supercomputer out there doesn’t represent science for science’s sake; it represents the first step in creating solutions to clean our lake and to keep it on that path,” he said. “That’s really exciting, because we now know that while they’re here in year three, that they’re going to be back for the next five years and a part of a comprehensive plan, and that’s pretty thrilling for us.”

The Institution partners with several other organizations, like the Chautauqua Watershed Conservancy and the Chautauqua Lake & Watershed Management Alliance, to find long-term solutions for lake health.

While the solution to Chautauqua Lake’s impaired health is still unknown and far from being accomplished, Shepherd believes the Jefferson Project’s VP deployments are a step in the right direction.

“There’s the old adage, ‘You can manage or you can measure,’ so we feel like we need to be able to measure what’s happening to the lake to come up in collaboration with everybody else around the lake to manage those challenges,” Shepherd said. “We’re trying to better understand the lake so that we can come up with a solution. It will take some time. But, I think the investment in time is worth it so that we can really understand the problem accurately — as best as we can, as accurately as we can.”