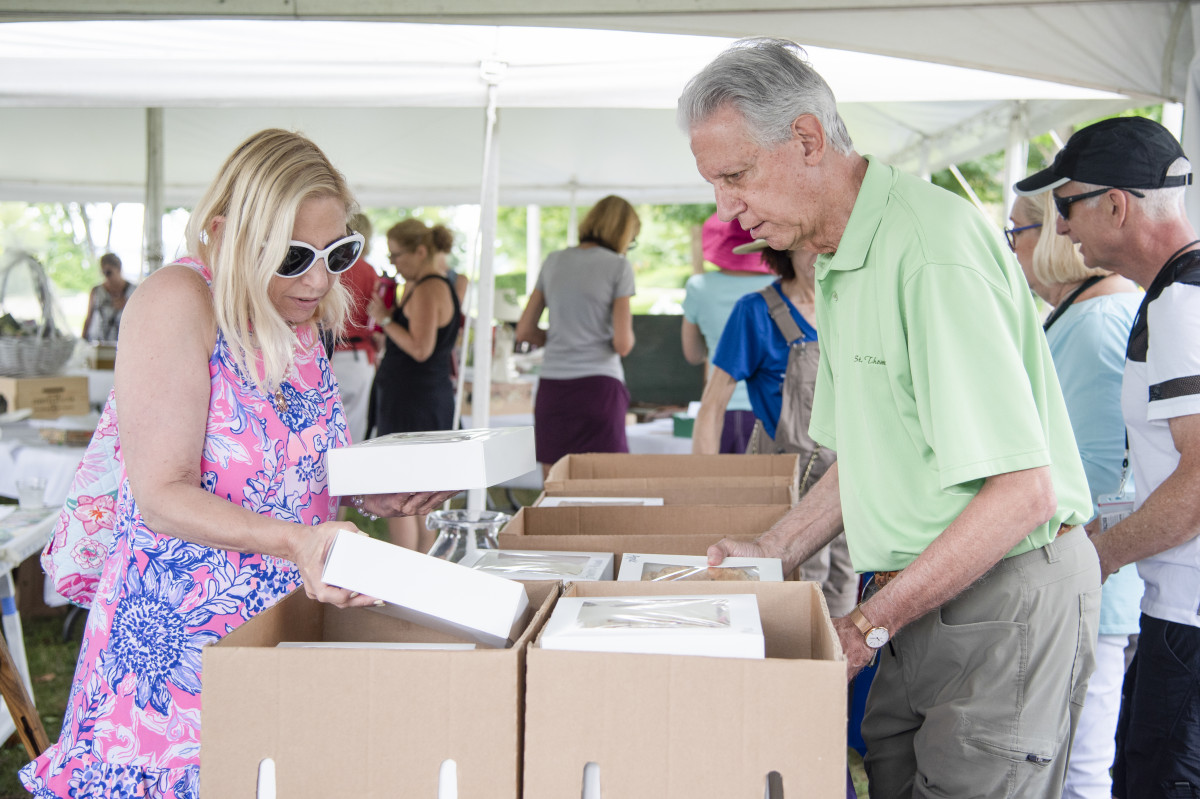 Come one, come all to the Chautauqua Women’s Club’s largest single fundraising event of the season — a two-day Pop-up Tent Sale and Silent Auction this weekend.

This event will take place between 11 a.m. and 3 p.m. on Saturday and Sunday, on the front lawn of the CWC House, 30 South Lake Drive.

The CWC’s Flea Boutique, located behind and underneath the Colonnade, which is typically open on Sundays from noon to 2 p.m., will be closed this Sunday.

It will be back in full swing between noon and 2 p.m. Wednesday — with Gail Gamble at the helm and overseeing the household goods on the Flea Boutique’s west side, Judy Williams overseeing the clothing on its east side, and several other CWC volunteers pitching in everywhere. They plan to continue their normal Sunday-Wednesday-Friday schedule throughout the remainder of the season.

Pop-up Tent Sale organizers Nancy Langston and Gamble — a former interior decorator and a visual artist and jewelry maker, respectively — said it will be a general sale offering merchandise of all kinds “from soup to nuts.” The best pieces donated have been saved for this event.

There will be lots of artwork; jewelry (mainly costume, but also some fine pieces); designer clothes, shoes and purses; household goods; and much more.

“The Pop-up Tent Sale and Flea Boutique rely on the extraordinary generosity of the Chautauqua community,” said Gamble, a past chair of the CWC’s board of trustees who now serves as the principal chair of the Flea Boutique.  “We’re always amazed at the pieces donated.”

The sale will also have a silent auction, which will end at 2 p.m. Sunday.

A “buy it now” price for shoppers unable or unwilling to wait until Sunday afternoon will, however, be provided at the bottom of the sheet of paper for each Silent Auction item.

Langston said that at the Pop-up Tent Sale, the CWC volunteers can take cash, checks and credit cards. The Flea Boutique, however, cannot process the latter.

“Traditionally, all proceeds go toward the operation of the CWC House, programming and scholarships,” Gamble said.

Among its many programs, the CWC currently hosts two weekly lecture series: Chautauqua Speaks at 9:15 a.m. Thursdays at the CWC House and the Contemporary Issues Forum at 2 p.m. Saturdays in the Hall of Philosophy.

Chautauqua Speaks features Institution employees, Chautauquans and people from around Chautauqua Lake and county. The CIF series brings to the Institution people from farther afield with big ideas or responsibilities doing important and often urgent work. It was established in response to concerns that the Institution’s Saturday programming was too light.

Founded for charitable and educational purposes, the Chautauqua Women’s Club provides a comfortable house and a variety of opportunities for enhancing fellowship; achieving CWC’s social, educational and service goals; and raising scholarship funding for students in Chautauqua Institution’s renowned Schools of Fine and Performing Arts.

Historically, the CWC held a significant role in the survival of Chautauqua Institution during the Great Depression, and in furthering the growth of the Chautauqua Movement, women’s education and leadership, social activism at the federal level, and philanthropy.

A successful Pop-Up Tent Sale and Silent Auction will go a long way to enabling the CWC’s members to fulfill its mission, and to keeping the CWC active and relevant within, near and far beyond Chautauqua Institution.