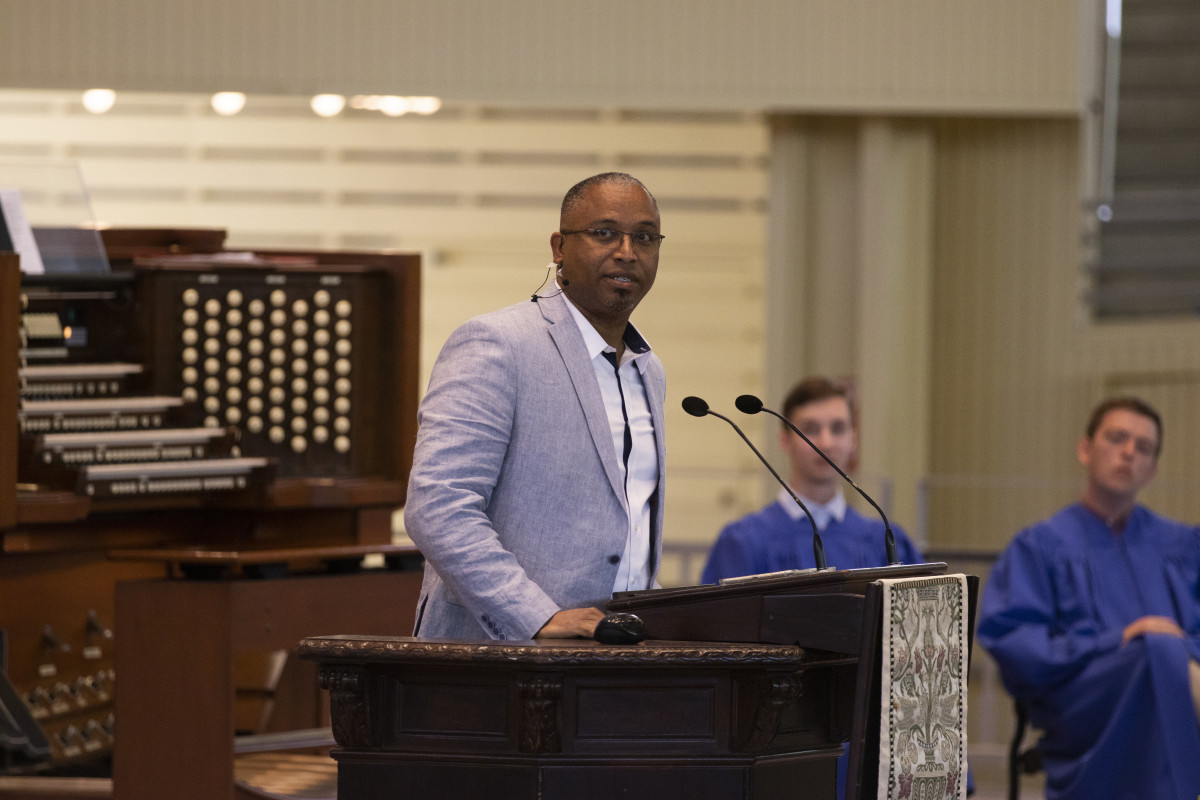 Mathews preached at the 9:15 a.m. Tuesday, July 12, morning ecumenical worship service in the Amphitheater. His sermon title was “The Place for Which Our People Sighed.” The Scripture text was from the prophet Amos 7:7-17.

Amos had been called from watching the sheep in Tekoa to speak a word of prophecy to the king of Israel. The king’s chaplains and courtiers did not like what Amos had to say. Amos saw a vision of a plumb line and saw the way the people of Israel were not living as God called them to.

The king threatened Amos with death for speaking treason, yet Amos would not relent and told the king that his wife will become a prostitute, his children would all die by the sword and all Israel would go into exile.

“What a wonderful scripture,” Mathews said with a smile. “I committed myself to preach from the lectionary for July 10, and so we will see how this Scripture and ‘Lift Every Voice and Sing,’ come together for a message.”

Words from “Lift Every Voice and Sing” were on a slide for the congregation to see.

“Stony the road we trod, Bitter the chast’ning rod, Felt in the days when hope unborn had died; Yet with a steady beat, Have not our weary feet come to the place for which our (people) sighed?,” Mathews led the congregation in reading this part of the second verse.

In his sermon on Sunday, Mathews shared how his family had studied the song as part of a lectio divina together and it was his inspiration for the sermon series this week.

“When I checked my notes for today, I realized that this sermon goes back seven years, after Michael Brown Jr. was killed in Ferguson,” he said.

As he accompanied clergy and local organizers on marches in Ferguson, Mathews had a “watershed moment.”

“When I was here in 2018, I told you that I was baptized again into the movement for justice and freedom, to fight injustice and cultivate the beloved community,” he said. “I was haunted by a question from the Amos Project in Cincinnati, ‘Are you a chaplain to the empire or a prophet of resistance?’ ”

In Ferguson, Mathews saw how the health, education and economic disparities conspired to keep young people in poverty.

“Rev. Mathews, are you a chaplain of the empire or a prophet of resistance?” he asked. “The hard truth is that from slavery to freedom, racial inferiority or superiority moved on to new forms  — Jim Crow, incarceration, education and health disparities.”

Mathews found himself humming “Lift Every Voice and Sing,” sometimes in community and sometimes by himself.

“It would bring tears to my eyes,” he said. “I was confronted with the ways hope was still dying before it was born in all the Fergusons of this country.”

Mathews asked, “Is this the place for which our people sighed? Young Black people are so devalued that their lives are snuffed out by educational, health and economic disparities. Is this the place we died for?”

That interpretation of “Lift Every Voice and Sing” was not lining up with the experience of young Black people. Mathews charged some middle-class Black clergy and congregations of contributing to and tolerating the exclusion of these young people.

Like Amos, Mathews saw a plumb line and realized that the United States was out of line with its stated values and the values defined by the Holy One.

“God gave us an ‘F’ on the test as a nation, as being unwilling to confront injustice,” Mathews said. “Amos was a grassroots organizer; he had to get past the chaplains of the empire to speak to the king. Amos had to face the media, the accusations of treason from the professional clergy who did the work of the empire.”

Mathews continued, “Amos asked the question that needed to be answered. He told them: ‘It’s not about me. We have to live up to our ideals and not crush the poor and needy. God is not impressed with our songs or pageants. God wants oceans of justice and rivers of right relationships. I am not conspiring — you are.’ ”

A friend of Mathews told him that having grown up in the ’60s, they thought they would change the world. Mathews told them, “You did, but the struggle continues. The journey of progress is a windy road and some days we are swimming against the tide. Some days (progress) is completely reversed.”

In his sermon on Sunday, Mathews told the congregation that as he did genealogical research, he found that in 1867, his second great-grandfather registered to vote.

“It is plausible that it took another 100 years before someone in my family, my mother, actually voted in 1968,” he said. “My ancestors would never have dreamed that their children were still a part of a movement to secure the right to vote in the 21st century.”

There is a T-shirt from the Black Lives Matter movement that reads: “This is not your grandmother’s civil rights movement.”

“There are many differences from the previous movements,” Mathews said. “Gender equity, sexual orientation, technology, faith and spirituality, the political context are all different. I believe it would be a mistake to completely divorce this movement from previous ones.”

In the 150 years that people have been fighting for their rights, they have felt demoralized at times.

He continued, “It is multi- and intergenerational, even transgenerational. As a Star Trek fan, I need to time travel, to stand in the long tradition of people who are prophets rather than chaplains. It is best to tell the story of kindred souls who fought for justice in the ’60s, ’40s, ’20s, the story of the Johnson brothers.”

These stories are medicine for the next generation, Mathews said. He quoted Valarie Kaur, founder of the Revolutionary Love Project, who called this “ancestral solidarity.”

“My third great-grandmother, Dulcey, might be surprised with the slow to no progress we have made, but she would be more devastated if we gave up,” he said.

“The road is stony, but we still have to try. The candle is dim, but we still have to keep sighing. Our patience is low, but we have to keep on keeping on. We have to pass on the prophetic mantle. Let us not let the hope die,” he said. “May God revive us so we sigh, breathe and have new life once again. Brother, sister, sibling, we have come a long way, and we have a long way to go.”

The Rev. John Morgan, senior pastor of Williamsburg Presbyterian Church in Williamsburg, Virginia, presided. The Rev. Richard Myers, pastor emeritus of Immanuel Baptist Church, Rochester, New York, read the Scripture. For the prelude, Joshua Stafford, director of sacred music and holder of the Jared Jacobsen Chair for the Organist, played “Jerusalem, My Happy Home,” by George Shearing, a Chautauqua favorite performer. The anthem, sung by the Motet Choir, was “Civitas sancti tui,” music by William Byrd and words from Isaiah 64:10. Stafford played “Fantasia and Fugue in C minor, BWV 537,” by Johann Sebastian Bach for the postlude. Support for this week’s services is provided by the Jackson-Carnahan Memorial Chaplaincy and the John William Tyrrell Endowment for Religion. Unless otherwise noted, the morning liturgies were written by the Interim Senior Pastor of Chautauqua, the Rev. Natalie Hanson. Music is selected and the Sacred Song Service created by Joshua Stafford.