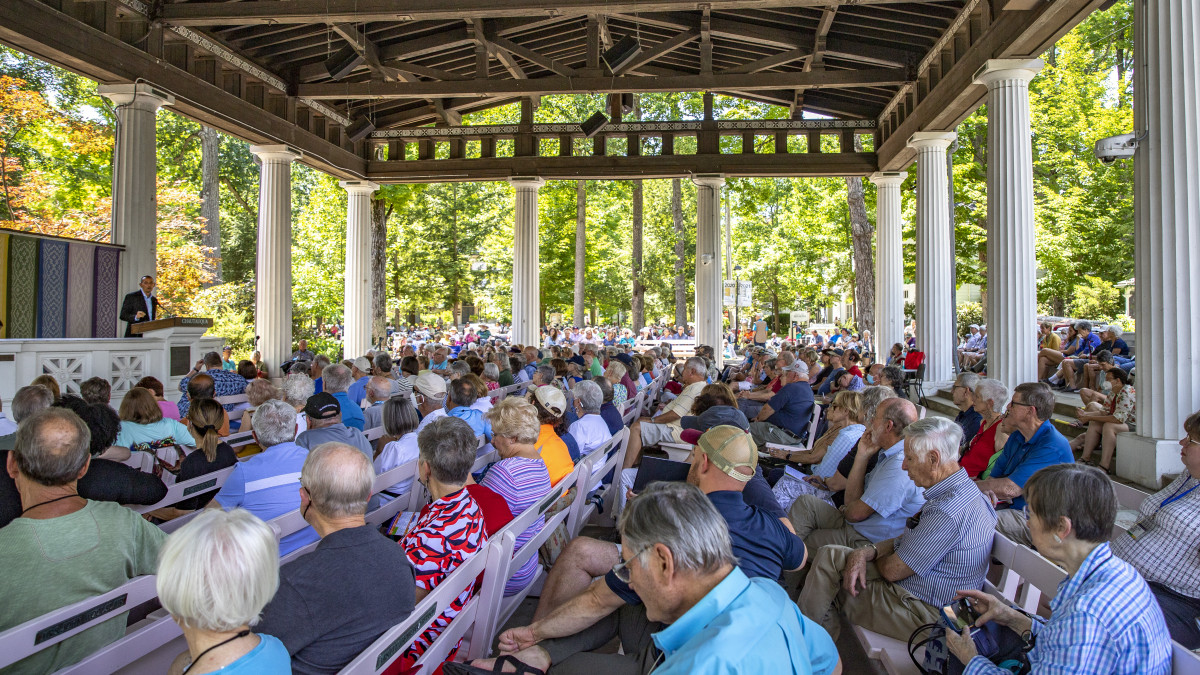 The past 16 consecutive years have seen a steady decline of global human rights. While the world is progressing, inalienable rights are regressing.

The Rev. Adam Russell Taylor, president of Sojourners and author of A More Perfect Union: A New Vision for Building the Beloved Community, opened Week Three’s Interfaith Lecture Series, Monday, July 11, with the idea of enhancing human rights through spirituality.

Sojourners is celebrating its 50th anniversary this year, and the organization aims to inspire hope and aid social justice causes through Christianity.

“For 50 years, we have been helping to inspire and equip Christians of all stripes, in addition to other people with faith and conscience, to put their faith into action boldly and courageously to advance justice and peace,” Taylor said.

Sojourners’ award-winning magazine has a readership of over 67,000, with their digital platform reaching 6 million. The organization challenges white Christian nationalism which threatens democracy, according to Sojourner’s 2021 Annual Impact Video.

Fighting apartheid, poverty and genocide have been a large part of the organization’s history of protecting and emphasizing human rights. Taylor focused his talk on global human rights commitments, particularly on what the U.S. government’s role should be.

“I think it’s critical for me to emphasize that, as a nation, we do not have credibility or legitimacy in our defense and promotion of human rights if we are not defending them at home,” Taylor said.

Taylor practices Christianity through his progressive national Baptist tradition, but he celebrates religious diversity and freedom.

“Our founders rejected the dangers of established religion and embraced religious freedom and pluralism as a core part of who we are,” Taylor said. “Christian nationalism is an enemy to the realization of human rights, not a friend.”

With his advocacy work, Taylor is familiar with strategic plans created to protect the rights of people across the globe. He particularly discussed Sustainable Development Goals, which are “the blueprint to achieve a better and more sustainable future for all,” according to the United Nations’ website.

SDGs were created to continue the success of the Millennium Development Goals, which were established in 2000 and achieved three years early.

“At the time, I was leading advocacy efforts at one of the largest Christian humanitarian organizations in the world, World Vision, and had the privilege of trying to influence that very messy and complicated discussion and debate about what should succeed the Millennium Development Goals,” Taylor said.

With a more in-depth focus on rule of law and the prevention of violence, Taylor said he felt that the SDGs would be successful.

“I also believe strongly that unless there was a greater commitment to addressing human rights as being indivisible and inviolable, we would fall short of these bold goals,” Taylor said.

Although the agenda included a greater emphasis on the rule of law, combating corruption and protecting human rights, Taylor said SDGs have become “a hidden secret within the United States context.”

Taylor asked the audience how many people they know could summarize the U.N. Declaration of Human Rights or list the current SDGs.

Taylor called for a greater focus on human dignity to connect people to one another and prevent these promises from being broken.

“Human dignity is the moral thread that binds and weaves together all of our commitments to social, economic, political and cultural rights,” Taylor said. “With a greater understanding and commitment to human dignity, we could animate the cause of human rights and the fight for human rights all around the world.”

Taylor knows the power of human dignity; he told the story of his parents’ interracial marriage in 1968 — the year after it was legalized across America in the Supreme Court case of Loving v. Virginia, and the year of the assassination of Martin Luther King Jr. and Robert F. Kennedy.

“It was a tragic turning point, I would argue, in the politics of this nation, creating a realignment from many Southern Democrats to the Republican Party,” Taylor said.

Taylor pointed to the rise of the religious right movement, which coincides with the desegregation of schools, which cements the racist undertones of the movement that still impact America now.

“I fear that human rights has become silly putty,” Taylor said. “The understanding of human rights has often been hijacked and distorted to support and demean things that are often the opposite (and) are antithetical.”

At their core, Taylor said, human rights are based on the protection of the dignity of all humans. It has been instilled in Taylor by his parents that everyone is made in the divine image of God, which has been his moral foundation of human rights and dignity.

There needs to be a shared understanding of human rights, or at least some shared principles, Taylor said. He reiterated that all human rights are universal and equal to each other, whether they are social, economic, political or civil.

“There’s no such thing as a small right or a big right. There shouldn’t be a hierarchy of rights,” Taylor said. “They all matter as a part of our commitment to human rights.”

While religion has been responsible for uplifting human rights, it has also been known to minimize or hinder rights’ accessibility to all humans.

“This divide (of human rights) has been exacerbated and often fueled by divides within the church, where the more conservative side of the church has often emphasized personal liberty and religious liberty as their sole focus,” Taylor said, “while many in the more mainline and liberal traditions have placed an emphasis on social justice and on our economic rights.”

These groups tend to fight for two separate sides of the same coin. But their ideals, when united, Taylor said, have the power to enhance a boundless amount of human rights.

But people must not take for granted the rights they have now, as their rights can be taken away at a moment’s notice. Taylor quoted Salil Shetty, the Secretary-General of Amnesty International.

“The battle for human rights is never decisively won in any place or any time,” Taylor said. “The frontier shifts completely, so there can never be room for complacency.”

Taylor pointed to what he called 16 consecutive years of decline in global freedom to prove Shetty’s words to be true.

But Taylor has hope for the future. He believes if the power of faith and spirituality are harnessed on a global scale, the commitment to human rights can be reignited.

Taylor acknowledged, however, that religion can both aid and hinder the development of human rights.

“(Religion) can be an enabler, and it can be an obstacle. It breaks my heart that faith can be so easily misused and abused to promote human rights violations,” Taylor said. “And we as people of faith, myself included, must acknowledge and repent for the way in which religion is so often misused and abused.”

But looking closer at U.S. history, it is evident that religion had a vital role in the Civil Rights Movement, Taylor said. Beyond the United States, he mentioned the role religion played during the Solidarity Movement in Poland or the Anti-Apartheid Movement.

“Well, it can be true, it is true, that (religion) can be a repressive force. Religion can also be one of the most powerful vehicles to inspire sacrifice and courage, to promote human rights and to resist evil in the world,” Taylor said.

Quoting Rabbi Abraham Joshua Heschel, Taylor explained the importance of moving out of the position of a bystander and into the role of an advocate for human rights.

“Morally speaking, there is no limit to the concern one must feel for the suffering of human beings, that indifference to evil is worse than evil itself. And that in a free society, some are guilty, but all are responsible,” Taylor quoted.

Both religion and human rights have the inherent vulnerability of corruption infiltrating their well-intentioned nature. Often, what is written on paper falls short of what is actually done for both. Taylor said ensuring common understanding of human rights could have the potential to promote real change and action.

“​​I believe that one of the reasons there’s such a significant gap between this common understanding that is so desperately needed is there is often a tenuous relationship between the kind of secular system of human rights, particularly in the U.N. system, and the role of religion,” Taylor said.

But Taylor said there is indeed an overlap: 84% of the world’s population identifies as religious. According to a Fetzer Institute study, for which Taylor served on the advisory board, those people are more likely to vote and speak out on social and political issues. They are also more likely to take civic and community action.

“My beloved friends, now is the time to tap into the power of faith and spirituality, to recharge and to superpower a global movement for human rights,” Taylor said. “I would argue that the fate and future of human dignity hangs in the balance.” 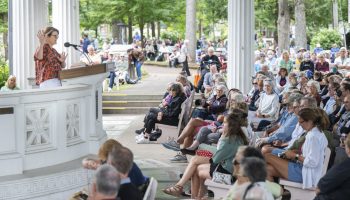 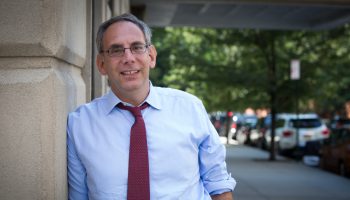 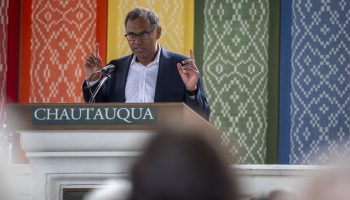