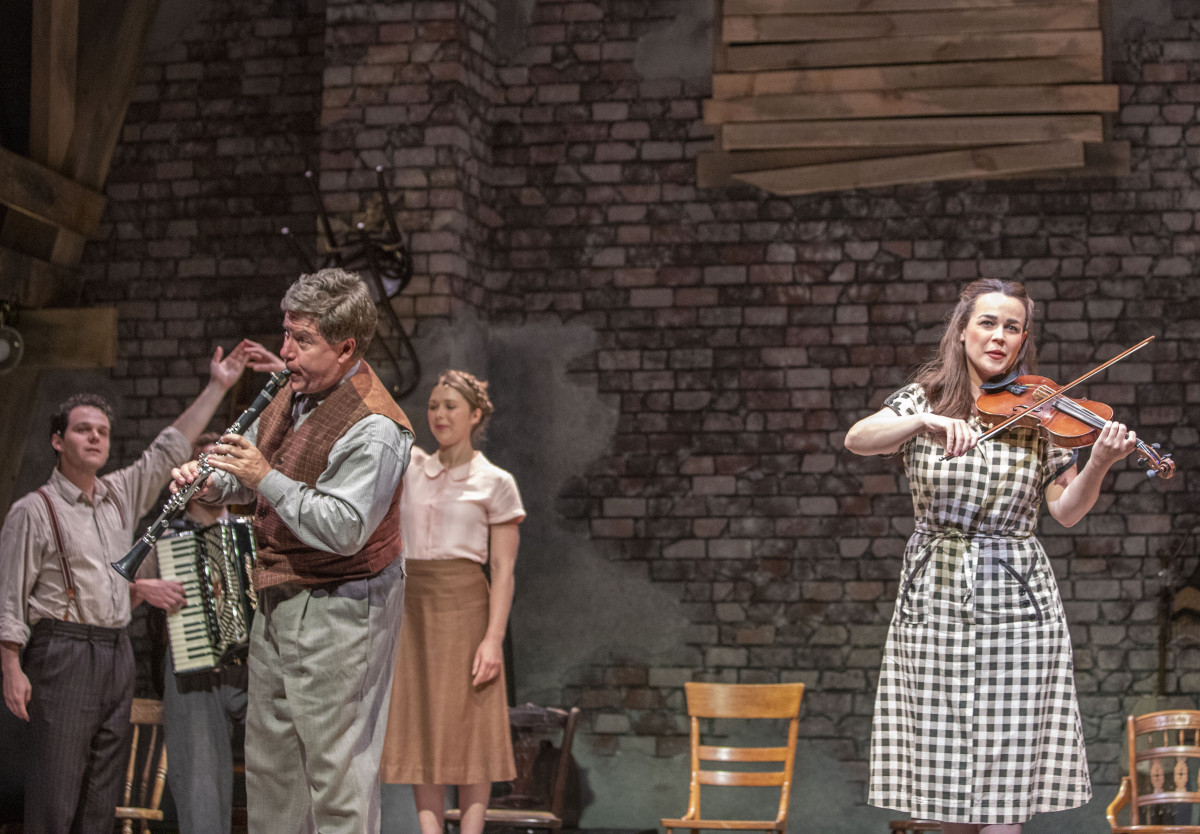 Paula Vogel’s Indecent, which kicked off Chautauqua Theater Company’s 2022 season, is a musical, or a play with music, depending on who you ask.

Regardless of nomenclature, it doesn’t adhere to the structure of a typical musical. Violinist Abigail Allwein, clarinetist Jason Gresl and accordionist Jeremy Spindler do not play the score from a pit; instead, they’re on stage for the entire production as both named members of the cast, and instrumentalists. Allwein, who is primarily an actor, appreciated the opportunity to combine her crafts.

“I love getting to cross over into this world of actor-musicianship because they fit so perfectly together,” she said.

Indecent’s score, influenced by traditional Jewish klezmer music, was originally co-composed by Lisa Gutkin (who served as music director for CTC’s production) and Aaron Halva. The tunes help to weave the narrative of a ghostly Yiddish theater troupe who recount the history of the Yiddish play The God of Vengeance, from its first reading in a Polish intellectual salon through its doomed Broadway debut. Indecent will continue its CTC run at 2:15 and 7:30 p.m. Wednesday, July 13, in Bratton Theater.

Gresl, like Allwein, valued the connection between different forms of artistry that Indecent offers.

“I think (music) ties in with what I love about acting, which is just the storytelling,” he said. “You could take these random pitches and put them in an order that triggers some emotion in people and takes them on a journey. I think that’s what’s really powerful about it — taking something ordinary and turning it into something special that people can relate to.”

Each musician has a different level of experience with Indecent. This is Gresl’s fourth production, and he noted that every director takes a different approach regarding which aspects of the multi-layered piece they choose to focus on. Allwein was in Indecent once before at Cape Rep Theatre in fall 2019. She was brought in as a last-minute replacement and is glad to have more time to dive into the material at Chautauqua.

As for Spindler, this is not only his first time doing Indecent, but his first time doing theater. A self-taught accordionist, he had no interest in musicals, but the death of revered theater composer Stephen Sondheim in November 2021 caused him to change his tune. Spindler described the emotional experience of listening to a Terry Gross radio interview with Sondheim after the composer’s death.

“I couldn’t get out of the car,” Spindler said. “I just sat there. It was midnight or something, and I was just so impacted by this man talking about his craft and his work. And there were excerpts from this piece they played, and I was just sobbing because it was so beautiful. And I thought to myself, ‘I need to find out more about this because this is amazing.’ ”

Indecent’s klezmer-influenced score was an apt starting point for Spindler’s entry into the world of theater. He has Jewish, Hungarian and Balkan ancestry, and he’s deeply passionate about folk music.

“I love music of the people,” Spindler said. “I’m always trying to find folk and traditional forms of music. I’m very interested in those. I don’t know, it just makes my heart explode when I listen to it.”

Gresl said that the use of klezmer music to guide the audience through the production was a fabulous homage to the tradition.

“The story follows this Jewish troupe through various iterations and places, and, therefore, the idea to have the score primarily be klezmer style is really powerful because the klezmer musicians, throughout history, have been there for all of the important occasions,” Gresl said. “Weddings were spelled out by what tune was played.”

The musicians, who had never met before, rehearsed together for 10 to 12 hours a day during tech week. They each played multiple instruments — Allwein on mandolin, as well as violin, Gresl on bass clarinet and tin whistle, as well as clarinet, and Spindler on accordion and woodblock.

Although the trio spent hours upon hours together during the height of rehearsal frenzy and have much more free time during the production run, they can’t get enough of one another. They’re already working on new collaborative projects, arranging a piece that Allwein wrote for their ensemble and talking about showing up on Bestor Plaza with a medley of Irish and klezmer tunes.

“To have a little time and space to play with this group and to make some music and record something — it’s exciting when you find a group that you really want to do that with,” Allwein said.

As Gresl knows from experience, different directors use a seemingly endless variety of focuses and styles. Allwein said there is no right or wrong way to produce Indecent.

“I hope to see this piece done 50 million ways that I couldn’t have imagined, that teach me something about what I didn’t know about what was possible,” she said. “It’s that kind of piece.”