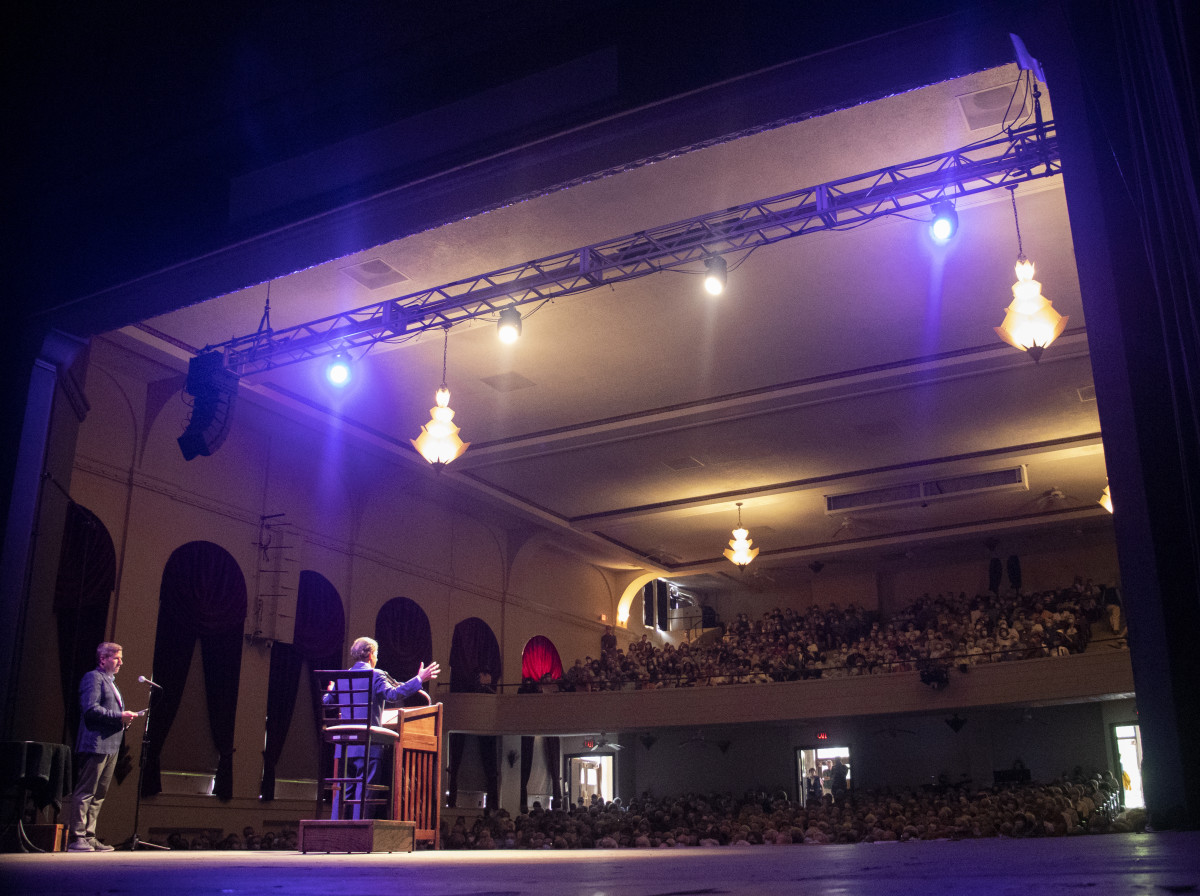 Bearing the loss of a loved one can feel like a nearly impossible task. Losing his son, Tommy Raskin, to suicide on the last day of 2020, U.S. Rep. Jamie Raskin (D-Md) learned to move forward by treating others with the love and dignity his son would have. Instilling Tommy’s moral values into his everyday life allows Raskin to reconnect with Tommy, keeping his memory and legacy alive.

It has carried him through the Jan. 6 insurrection at the Capitol and the second impeachment trial of President Donald Trump, for which Raskin was manager, and now as a member of the Jan. 6 Select Committee.

The lecture’s location was switched from the traditional space of the Hall of Philosophy for security purposes. This decision was made several weeks prior to the attack on Salman Rushdie last Friday in the Amphitheater.

Calling Chautauqua “one of the freest and most beautiful places” in the country, Raskin said the grounds are “a space of reasoned, passionate and nonviolent dialogue” in a world that feeds off of violent fanaticism.

Emphasizing the spirit of Chautauqua and its focus on freedom and progress, Raskin reflected on Rushdie’s definition of freedom. In 2006, Rushdie said that the ability to argue and debate the meaning of all stories allows for the growth of societies. By stories, Rushdie was speaking on the narratives of families, communities, and religions, among others.

“The bloody assault on Salman Rushdie on Friday is not just an assault on one writer of exquisite imagination and moral power. It is not just an effort to silence one man and break one pen,” Raskin said. “It is an assault on everyone’s freedom to think, to write, to create, to argue and to grow. It is an attack on not just this community, but on the worldwide project of democratic community.”

Raskin dedicated his opening remarks to both Rushdie and his son, Tommy, who he called “another unyielding champion of human freedom and dignity.” Although the two never met, Raskin said Tommy admired Rushdie and his work.

“We wish Salman Rushdie a speedy and complete and total recovery, because we love him and we need him,” Raskin said. “… We send Salman the strength and love of a resilient democratic America that knows how to think and read and write and feel without committing violence against other human beings.”

Even though the present moment is one of struggle, violence and trauma, there are people who defy these problems through their very existence. Raskin said his son was one of these people.

“My son Tommy, a young man of extraordinary gifts, a born moral philosopher, a comedian, a playwright, a prankster, a champion of human rights, an anti-war activist, a vegan, a visionary, a second year student at Harvard Law School when we lost him, a jazz musician,” Raskin said, “was born into this world of violence, trauma, plague and unreason.”

Tommy grappled with a lifelong battle against depression, which Raskin said ultimately broke him.

“On Dec. 31, 2020, the last day of that fateful, wretched year, Tommy took his life,” Raskin said. “He left us a note that said, ‘Please forgive me. My illness won today. Look after each other, the animals and the global poor for me. All my love, Tommy.’ ”

Tommy died at 25, but Raskin said his short life was infinitely valuable. In his time, Tommy wrestled with several dilemmas — moral, ethical, philosophical, political and social — in hopes of finding a path to a more just world.

“I won’t be able to give you today any kind of complete account of Tommy’s philosophy, his worldview, but the key thing to understand is that none of the problems he faced were abstract to him, or academic,” Raskin said. “They were concrete. They were urgent. They were practical challenges for living a decent life, and he tried to live every moment of every day with deliberate ethical consciousness and integrity.”

When Tommy shared his moral propositions, Raskin said they were nearly the truest propositions one would encounter, as they were filled with conviction and courage to bring them to fruition in the world.

Focusing on one of the lingering ethical problems that lived inside Tommy’s mind before he passed, Raskin said the last thing he wrote about was the trolley problem. This philisophical thought experiment is focused on a fictional scenario in which an onlooker must choose to save a group of people about to be hit by a trolley by diverting its path and subsequently killing only one person; or not act at all and letting fate proceed without human influence. The trolley problem is widely considered an academic favorite, as it is a seemingly unsolvable puzzle that handles several ethical issues.

“Tommy said that the moral significance of the hypothetical derives from the nervous energy and moral ambivalence that we feel in trying to decide between passively allowing 99 people to die, and actively choosing to kill one person,” Raskin said. “Whereas most philosophers writing about the problem go from there to argue on one side of the equation or the other, Tommy argued that the importance of the problem is in understanding the fundamental equivalency of these two actions.”

Every day, humans passively allow 99 people or more to die of hunger, disease and a lack of basic human necessities, most of them children, Raskin said. Because humans do not feel directly responsible for these deaths, they allow themselves to deny their responsibility and act as onlookers.

“But the trolley problem forces us to confront, Tommy said, the deep moral intuition that passively allowing 99 people to die is a lot like deliberately choosing to kill one person,” Raskin said. “… (When) we’re just living our lives, we must remember that working to save children from death by war in Yemen, or starvation in Haiti, or from malaria in Nigeria, or from gun violence in Texas or in Buffalo, is an urgent moral imperative.”

It was Tommy’s belief that humans must do whatever they can to save others from unnecessary violence and injury. Acknowledging that this is a nearly impossible task, Raskin went back to something Tommy always said: It is hard to be human.

“He lived with a tremendous sense of responsibility, an all-consuming obligation to make the world a better place and to assist anyone he could in any circumstance where he could help,” Raskin said.

Tommy would work part-time jobs that did not pay a lot of money, but he would always donate a portion of his earnings to organizations he believed in.

“He had very few material desires himself, but intensely passionate, spiritual yearnings for the world,” Raskin said.

A vegan, Tommy thought that humanity would one day view the consumption of animals as barbaric. He also argued that children are natural vegetarians.

While some vegan philosophers and advocates argue that vegans should not eat Impossible burgers or other plant-based foods that simulate animal meat, Tommy found this argument to be ridiculous, as it portrayed “puritanical snobbery.”

“(Tommy) regarded Beyond burgers and Impossible burgers as a major scientific, culinary, political and moral breakthrough for humanity,” Raskin said. “For Tommy, the ethical question was settled by whether the fake meat protein substitutes reduced animal meat consumption, making vegetarianism a more attractive and robust option.”

It was Tommy’s goal to maximize the happiness and wellbeing of others. And in this debate on plant-based foods that imitated meat, he professed that he does not want to be a part of a vegan club, but rather a vegan world.

“I could spend all day telling you about the moral and political problems and solutions of Tommy Raskin,” Raskin said. “Even to enter into a few of them just for 10 minutes is to glimpse the enormity and the magnitude of our loss.”

While Tommy lived with depression and anxiety, he was committed to the dignity and autonomy of all people. He kept his illness mostly secret from nearly everyone, but in some of his papers, Tommy expressed the importance of recognizing the reality of mental illness.

“(Tommy) struggled with (mental illness). He took his medicine, he saw his doctors, but in the end, it was too much for him. And we lost him,” Raskin said. “And that’s just a catastrophe for us that we have to live with.”

There will be a time, Raskin told Chautauqua, when people who have lost a loved one, even those at a young age, will be able to speak their names “without dissolving completely.” He said this time will restore the coherence of one’s life, mind and heart.

“You will be able to begin to see their life in its entirety, not just the final days, or the ways of their going,” Raskin said. “… (And that will leave us) with beautiful, imperishable memories, specific lessons and injunctions … to look after each other, the animals and the global poor with all our love.”

While Mother Jones once said to “pray for the dead and fight like hell for the living,” Raskin believes this statement would carry more impact if it was changed slightly to “pray for the dead by fighting like hell for the living.” It is Raskin’s belief that one can show their love and devotion to the people they have lost by serving causes they believed in.

Raskin ended with a quote from Thomas Paine’s The American Crisis, revising the gender-based language to fit modern sensibilities, which he acknowledged Paine would appreciate.

“These are the times that try men and women’s souls. The summer soldier and the sunshine patriot will shrink at this moment from the service of their cause in their country,” Raskin said. “But everyone that stands with us now will win the love and the favor and the affection of every man and every woman for all time. Tyranny, like hell, is not easily conquered, but we have this saving consolation: The more difficult the struggle, the more glorious in the end will be our victory.”