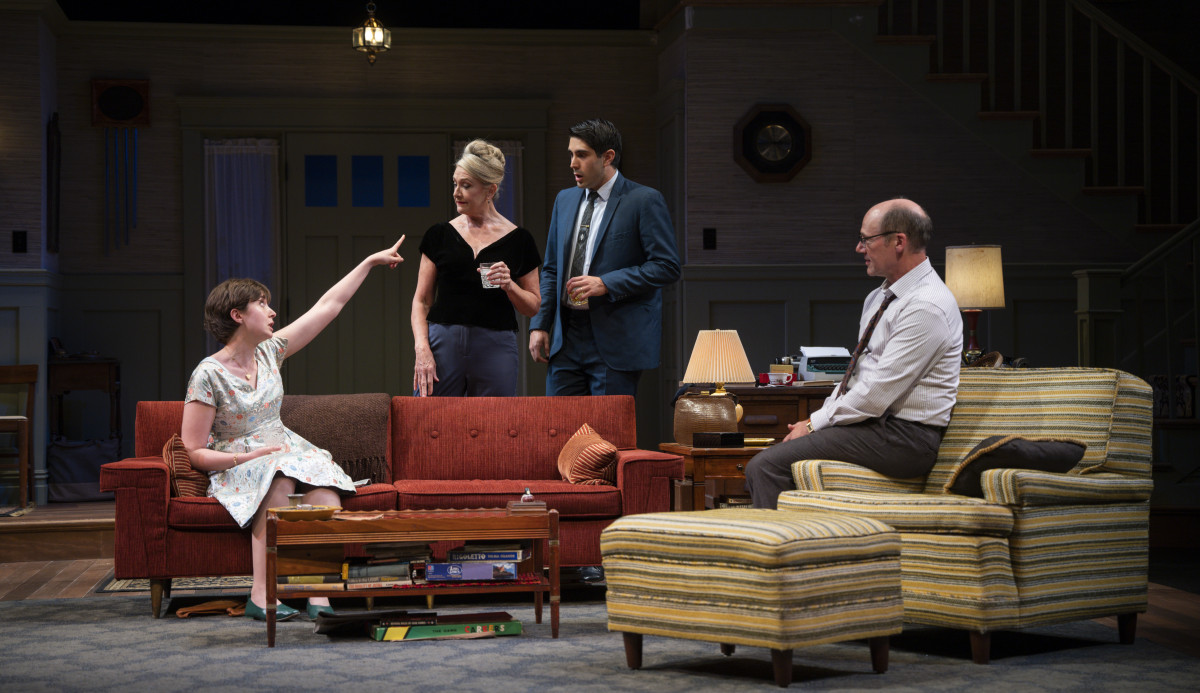 Adam Shaukat and Madeline Seidman are the farthest thing from strangers.

The Chautauqua Theater Company Guest Actors, who play Nick and Honey in CTC’s Who’s Afraid of Virginia Woolf?, were in the same cohort in Yale Drama School’s Master of Fine Arts acting program. Typically, that program is three years, but due to the COVID-19 pandemic, Shaukat and Seidman’s course of study was extended to four. They spent nearly every day of those four years together.

Shaukat said they kept getting paired together for scene studies, a teaching method where acting students work a scene in front of a professor, cohort or both. Additionally, they recently played Malvolio and Olivia in Shakespeare’s Twelfth Night, one of their final grad school productions.

Now, for their first post-grad gig, Shaukat and Seidman are paired together once more, playing the younger couple in Edward Albee’s American classic Who’s Afraid of Virginia Woolf? which will continue its CTC run with two performances, one at 2:15 p.m. and another at 7:30 p.m. Wednesday, Aug. 17 in Bratton Theater.

Seidman said that she and Shaukat have a natural affinity for one another.

“We just have a great friendship as classmates, and we’re both Jewish and anxious,” she mused.

Shaukat’s Nick and Seidman’s Honey are invited over to the home of George and Martha for an after-party at the late (or early) hour of 2 a.m. George is a history professor at a local university, Martha is the daughter of the university’s president, Nick is a new biology professor and Honey is his wife.

Throughout three hours of excessive drinking and sardonic banter, George and Martha engage Nick and Honey in their games of cruelty and manipulation.

Given that Virginia Woolf is such an intense and, at times, frightening play that pushes its characters to their psychological limit, Shaukat and Seidman are grateful to have each other.

“It’s been a huge blessing to be able to work with Madeline,” Shaukat said. “We just know each other really well, and we know each other’s processes, how the other learns, and how to respect one another and each other’s boundaries. I think we’ve always had a great working relationship, and friendship too, so it feels really lucky.”

Seidman said that despite the discomfort of the situation, Nick feels obligated to forge relationships with his new colleagues. Honey, who does not drink very often, feels a claustrophobic sense of entrapment and uses alcohol as an outlet.

“I think she escapes the situation through drinking more so she can sort of not be as confined,” Seidman said.

George and Martha have an extraordinary command of language and possess fierce intelligence. Shaukat said that the heart of the play is four people yearning for connection, and who stumble catastrophically through the process. Their minds may be sharp, but their emotional intelligence suffers in the wake of their intellect.

“I think one of the most interesting parts of the play is that it shows that while intellectual prowess can be a righteous pursuit, it doesn’t mean that it’s going to help you live a fulfilled life,” Shaukat said.

Nick is ambitious to a fault, striving for the heights of achievement, perhaps at the expense of his personal relationships. Nick was a champion boxer and earned his master’s at just 19. He and Honey have known each other since they were children, and their families always assumed they would end up together, creating a sense of weighty inevitability to their marriage.

“There are moments where (Nick) is trying to connect with people, but I think that he’s suffering from the opportunity cost of having tried to be the best his whole life,” Shaukat said, “(to be) the best hierarchically and in terms of his labels and achievements, and he has not been the best in terms of being a great friend or spouse. And he is lonely because of it.”

Honey is not the intellectual that the other three characters are. Seidman would describe her as a bit ditzy, especially as she continues to drink. The buzz of alcohol causes her to lose her filter. Seidman said Honey’s drunkenness is fun to play with, and that the innocence and comedy she brings is a necessary antidote.

“Everybody else is so cruel to each other,” Seidman said. “Honey doesn’t have as much of a  manipulative side. She has a couple of dramatic moments, but for the most part, she offers comedic relief.”

Shaukat said that the language of the play is the most complicated he’s ever encountered — more so than even Shakespeare. One can use a dictionary to understand Shakespeare’s words, and once that knowledge is attained, can understand what the characters mean. On the other hand, Virginia Woolf’s language is twisty and duplicitous.

“This language is sort of like a roller coaster with infinite loops, and you just keep looping and you keep going up and down and left and right, and you don’t know where you’re going next — because everyone is so smart, and everyone’s defining attribute is how quick-witted they are,” Shaukat said.

The dense script and three-hour runtime is an exercise in stamina for the actors. Seidman echoed Shaukat’s assessment of the play.

“The language is so complicated, and the thoughts — ​​you definitely can track them, but they’re very complicated thoughts,” Seidman said. “They come back around or seem to come out of nowhere. And getting into the psychology of the character is both challenging and a huge, fun task.”