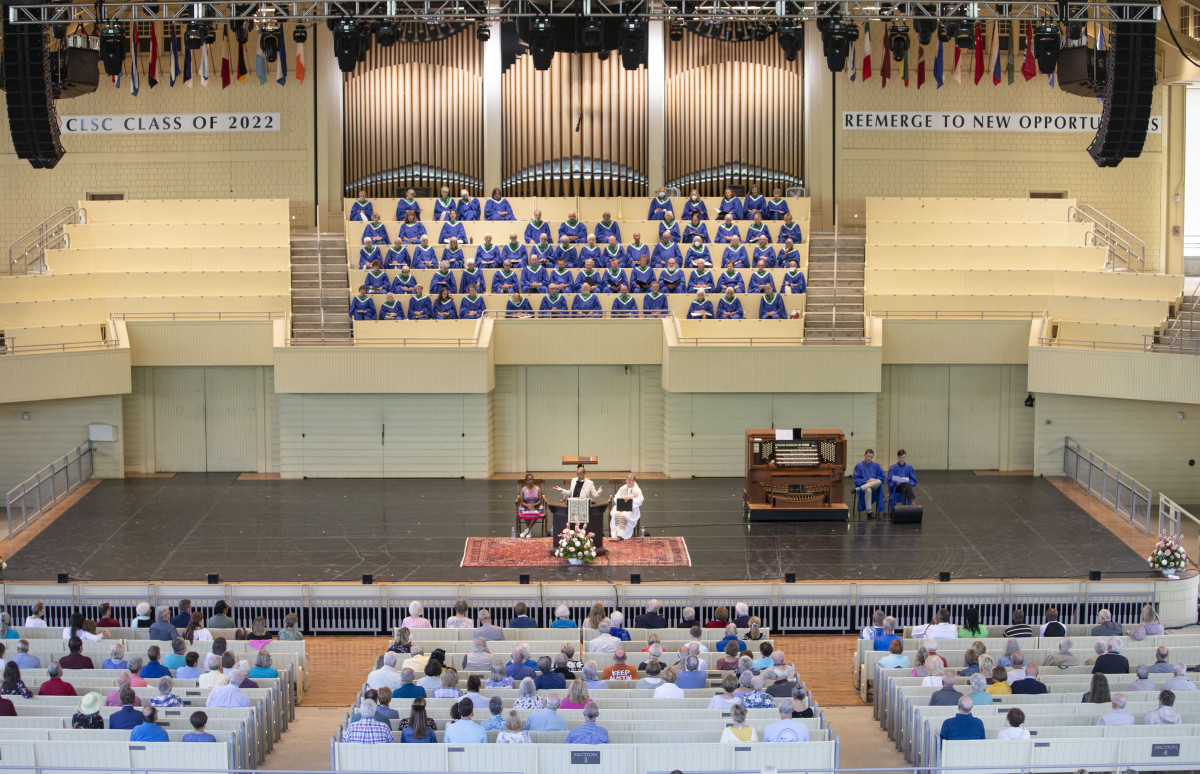 “Who are we to be as people with soul in a nation with a warring soul?”

With this question, the V. Reverend Kelly Brown Douglas continued her theme of the week at the 9:15 a.m. Tuesday, Aug. 16 ecumenical worship service in the Amphitheater. She asked whether the nation will be defined by the pledge of liberty and justice for all, or by the legacy of slavery?

Her refrain for the morning was song lyrics: “Poor little Jesus boy, / Born in a manger / World treat him so mean, / Treat me mean too.”

As a child growing up in Dayton, Ohio, Douglas looked forward to going to church every Sunday. She happily attended the 8 a.m. service, Sunday School service and the 11 a.m. service. She loved stories about Jesus, but always cried when she heard about the stable birth. How baby Jesus could be cast out into a cold, dirty manger with no crib for his head, made no sense to her.

She remembered once, as a little girl of 7, riding through inner-city Dayton on a cold, rainy day. Through the car window, she saw two children about her age, a girl and boy, crossing the street. They were disheveled and not properly dressed for the weather. They looked, as she imagined, poor and hungry. Douglas vowed to herself that when she grew up she would find a way to rescue those children from the blight of the inner city. In her mind, she knew that there was a connection between Jesus’ birth in a manger and these children.

In this same way, Douglas said, enslaved Africans in America knew that there was a connection between their oppressed reality and the poor little Jesus boy born in a manger. Even if the white slave chaplains introduced the slaves to Christianity, they did not introduce them to God. Before they were enslaved, they had met the great God in Africa and knew God to transcend the sinful reality in which they lived.

Slaveholders used Ephesians 6:5 to enforce obedience and demand that slaves accept their reality, Douglas said, but the enslaved people did not follow this spiritual coercion.

Instead, they accepted the God who inspired Moses to demand that Pharaoh let his people go. The enslaved Africans knew that God’s intention was for all people to be free. Douglas said that as the enslaved came to know the God of Exodus as the Great God they already knew from Africa; they inevitably discovered Jesus. They did not, however, discover the Jesus whose name was carved on slave ships, but the poor little Jesus boy, who was born in a manger and was treated mean by the world.

Douglas quoted Howard Thurman, saying that the enslaved Africans undertook the redemption of Christianity that their slave masters had profaned. They knew they were vindicated by baby Jesus in the manger.

The manger birth, Douglas said, is part of the essential message of Christianity — that Jesus is one with the marginalized and the outcast. In his first public sermon, Jesus said that he was sent by God to bring good news to the poor, the prisoner and the blind. In the words of Thurman, Jesus brings good news to the disinherited, those with their backs up against the wall.

“Who are we to be as people of soul in a nation with a warring soul?” Douglas asked.

“We are to be stone catchers and outcast-oriented,” she said.

She continued: We are to be oriented to and accountable to those who find themselves on the underside of justice.

Douglas said that Scripture is clear that the Kingdom of God is to be inaugurated by justice for the outcast. Jesus said that we are to be accountable to the hungry, the needy, the sick and the incarcerated. This is the message of Matthew 25:40.

“Chautauqua community,” Douglas said, “inasmuch as God’s future means dignity for all people, we must begin with justice for those who are marginalized, pushed aside and cast out.”

She cited U.S. Rep. Cori Bush, from Missouri, who recently tweeted: “Everything I do begins with those who have the least, who’ve suffered the worst, and who have the greatest to offer.”

Only when all who have been denied justice — because they are the “wrong” color or gender, or have the “wrong” sexual orientation or national identity — are permitted to achieve their full human potential, can we say that the hope of achieving God’s kingdom is realistic, Douglas said.

She told the story of Pamela Brown, a 42-year-old mother of two. She was trapped in a marginalized manger life in a poorly ventilated, single-wide trailer. The trailer had holes that vermin could crawl through, and mold that triggered her daughter’s asthma. Pamela eventually succumbed to COVID-19.

Douglas enjoined Chautauquans to be accountable to Pamela’s children and all children who need food, safe shelter for sleeping, and access to quality health care. When these children are free to grow into the people God intends them to be, Douglas said, then we will know that we are on the moral arc that bends toward justice. We must be outcast-oriented in the laws we support, in the communities we build, and in how we order our own living.

Douglas said she once imagined that she would grow up and the poorly clothed boy and girl crossing the street in Dayton would stay forever young. She would become a teacher and somehow change their life options. The thought of those children, she said, lives in her soul, fueling a deep sense of accountability to those who look like her.

“How can we make a difference to those entrapped by a manger reality?” Douglas asked.

We must, she said, be forever both stone catchers and outcast-oriented, living the lives Jesus told us to live when he said, “Whatever you do to the least of these, you do to me.”