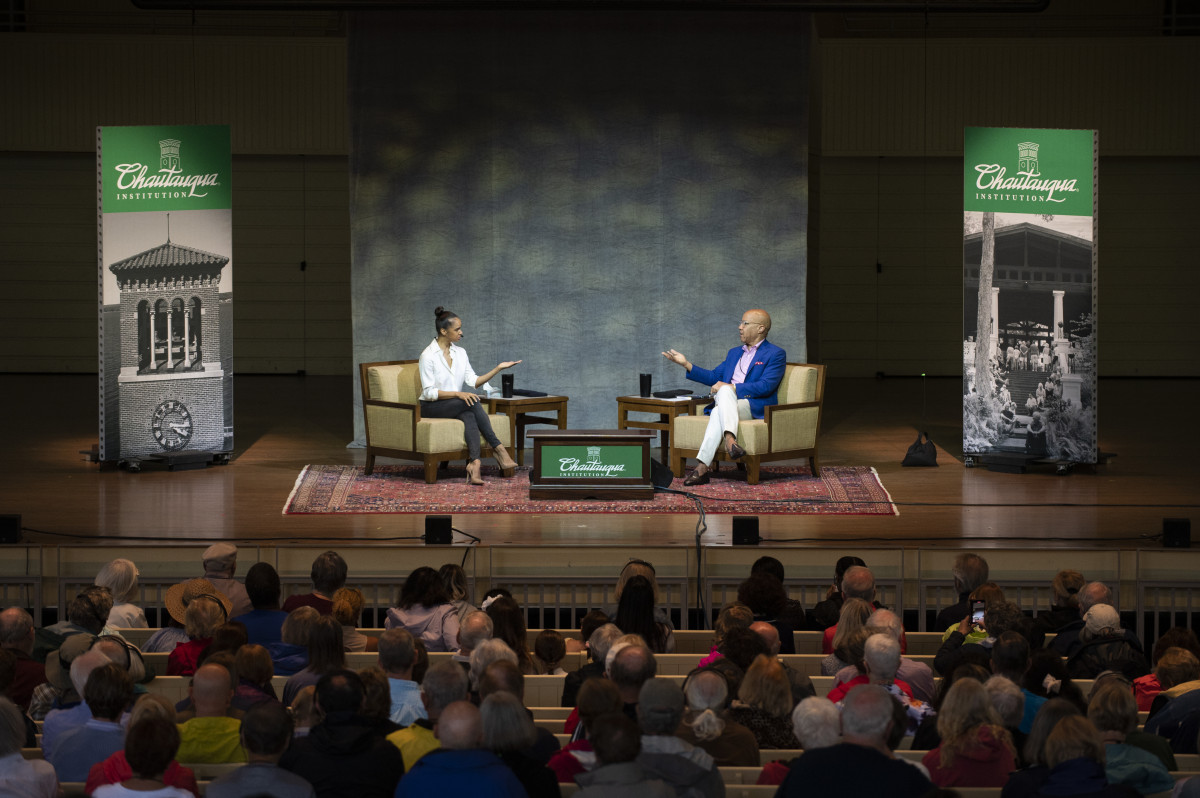 When someone looks at Misty Copeland, they see the first Black female Principal Dancer for the American Ballet Theatre, a mentor to young dancers, and the author of the New York Times bestselling memoir Life in Motion.

But what did it take for her to get there?

That is what Darren Walker, president of the Ford Foundation, wanted to find out in his conversation with Copeland at the 10:45 a.m. Tuesday, Aug. 16 installment of Week Eight’s Chautauqua Lecture Series in the Amphitheater.

For Copeland, her journey started in Kansas City, Missouri, before her, her three siblings and her mother moved to Southern California. Frequently homeless, Copeland and her family stayed in motels or with friends who had extra space.

One thing showed her that her voice mattered and helped her communicate what was going on inside of her, and that was dance.

“It wasn’t until I discovered dance and ballet that I felt that I was good at something, that I actually had a way of expressing what was inside of me,” she said.

While dance felt right to Copeland, it was not always an easy journey. Her mother inspired her to continue to stay strong through hardship.

“To see her raising six children on her own, it instilled in me this is what a strong Black woman is,” she said. “I think that’s what I have always striven to be.”

After hearing about the hope and inspiration of Copeland’s life, Walker had to ask about the grief.

“No child who is technically homeless, moving from motels to sleeping on the sofas and floors of friends’ homes, can come out of that experience without having to deal with real pain,” he said.

Copeland acknowledged he was right. As she grew up, she noticed how the trauma of not having a stable home affected her; those feelings and that hurt would pop up without warning. She deals with pain through dance, and does not think that her background should limit her.

“You should not be boxed into this place where — just because of the circumstances you grew up in — that should dictate what your future looks like,” she said. “That has been my journey, believing in that. And knowing that, with the right support, that you can overcome anything.”

Walker expressed his surprise that she overcame so much pain through a career in one of the “most elitist, whitest” art forms. No stranger to the dance world, Walker has served on boards for prestigious dance companies, such as the New York City Ballet.

“There is no art form that is seemingly more unwelcoming of Black women than classical dance,” he said.

Whether it is critiquing the shape of their body, or encouraging them to switch into other forms of dance, classical dance is a difficult space for women of color. But when Copeland first experienced dance as a 13-year-old at the Boys & Girls Club of San Pedro, California, she didn’t immediately feel that. She did not know ballet’s discriminatory history at the time; she just knew she loved to dance.

“The technique, the pure language of this craft is not racist. It’s not. It doesn’t exclude,” she said. “It’s the most beautiful, pure way of communicating that I had ever connected with.”

Part of what made her initial encounter with dance so magical was her teacher.

“I had a teacher who supported and encouraged me and made me feel beautiful, and celebrated my Blackness,” she said. “It was never something that we were hiding. It was never a conversation that was avoided, and I felt like all of that gave me a really pure and natural introduction into classical dance.”

Walker used this moment to encourage the audience members to create scholarships for dancers. Donating money allows for dancers to learn and grace performance stages that they couldn’t have without financial support, he said.

The next step in Copeland’s career was her move to New York City, where she joined the American Ballet Theatre. It felt like a completely different world to her.

“I think, ‘I’m moving to New York City. There’s so many cultures and people from different backgrounds.’ And I was really excited to come into this atmosphere,” she said. “Then I was spending eight hours a day in a building where I only saw white people and I only interacted with white people. I was the only Black woman in the American Ballet Theatre for the first decade of my career.”

Her dance teacher in San Pedro encouraged her to join ABT because it is technically culturally diverse as it accepts dancers from anywhere, whereas other ballet companies only accept dancers from their own schools. Even with this practice, ABT’s company was still very white.

The language toward Copeland shifted when she came to ABT. In San Pedro, her teachers told her she was a prodigy and she was built perfectly for dance. But in New York?

“You are too short. Your breasts are too big. You shouldn’t be cast in the ballet blanc, which translates to white ballets — I would ruin the line,” she said. “I would take away from this sea of white dancers on the stage dressed in while tulle and pink tights and pointe shoes.”

This did not sit well with Copeland. She discussed it with her Black dance peers in New York. It came down to a lot of tough and uncomfortable conversations that Copeland had to have with the artistic staff.

Walker noted how a lot of Black dancers left the industry because these conversations are so difficult to have.

“Most just ultimately could not withstand the racism, the sexism,” he said. “So what gave you the courage? Where did you muster the confidence when you are being told things that actually undermine your confidence?”

Copeland points to her support system.

“(They were) powerful Black women who wanted to be an example and help raise me up. But it’s also been generations and generations of other Black dancers chipping away,” she said. “I think that the timing of me coming into ABT was a big part of it. This is not just my courage.”

While many Black dancers have come before Copeland, she is the first Black Principal Dancer at ABT, a historic position. Because of this, Walker thinks she is part of the larger history of the company, and of ballet itself.

Copeland accepts this, but said she is hardly the only Black ballerina.

“My responsibility is uncovering, telling these stories that have been erased, that haven’t been documented. Yes, I’m the first African American Principal Ballerina with American Ballet Theatre,” she said. “But there have been Black ballerinas contributing to classical dance for so many generations.”

Without mentors like Raven Wilkinson, who was the first African American ballerina to dance for a major ballet company, the Ballet Russe de Monte Carlo, Copeland isn’t sure if she would have had the courage to keep showing up in predominantly white, or sometimes all-white, spaces and keep dancing.

“I stand on the shoulders of so many people who have put in the work for generations and generations and deserve to be acknowledged and shown that they’ve contributed to this history,” she said.

She is not alone as a Black dancer, but sometimes she feels the added pressure of being one. When she thinks only about performing the movements of classical dance, she does not feel frightened. The fear comes when she considers being a Black ballet dancer.

“I would say the first time that I truly experienced fear, it was all wrapped up in years of baggage and trauma of the Black ballet experience that I carried on my shoulders when I was given the opportunity to perform Swan Lake for the first time,” she said. “The fear of, if I fail, will there be another opportunity for a Black woman to take on this role?”

She could not help but think of the Black people who would come after her, and if her performance would directly impact their opportunities.

This fear was backed up by the media response of her Swan Lake lead. For most dancers, they debut in a matinee performance, and it is not an earth-shattering experience, but for Copeland, the New York Times was previewing it. Newspapers and magazines were questioning if this opportunity would get Copeland promoted to Principal Dancer or not. All eyes were on her.

But when she got onstage, everything brewing inside her calmed.

“As soon as I stepped onto the stage, it’s like you remember the majority of the people who are in the audience are there to support you. They are there to enjoy the performance. So I had to remember that,” she said. “Once I went on stage, it was like I was enveloped in the embrace of people who wanted to be there.”

ABT now has one of the youngest and most diverse audiences out of all major American ballet companies. Walker and others contribute this to Copeland’s 2015 promotion to Principal Dancer, and he wanted to hear about what the day was like when she was promoted. As an outsider, Walker remembered seeing a Dow Jones ticker message proclaiming the news.

When Copeland was promoted, she was exhausted from a whole season of dancing at the Metropolitan Opera House. They were in a meeting the day she found out.

“My director just turned to me, and he didn’t even say, ‘You’ve been promoted to Principal Dancer.’ He said, ‘Misty, take a bow.’ Everyone knew what that meant,” she said.

Since the Metropolitan Opera House had a show that night, Copeland had to keep moving and did not have time to immediately process her promotion. She still knew she had to dance to the best of her ability, no matter what her new title was.

While Copeland thinks about the rehearsals and the shows she has to do, she also thinks about the future of ballet, which inspired her to create the Misty Copeland Foundation. The goal of the foundation is to create diversity in the ballet by giving more opportunities for children to learn how to dance.

“Through my own experience of being given an opportunity, being given a scholarship, being discovered at a community center, I wouldn’t be the woman that I am,” she said. “It’s not about the beautiful, amazing career that I’ve had, but the tools that I have learned through dance, through being a part of a community center that gives you access to mentorship and tutors.”

In Copeland’s experience, people want to do that work of teaching students who may not otherwise have the resources to be trained. These conversations of how more people can become involved in dance, and the lack of diversity in classical dance are happening, she said. And especially after the murder of George Floyd, she said, they’re happening in major dance companies like ABT.

“I feel hopeful for the future of classical dance,” Copeland said. “And I will forever be a part of it in a major way.”