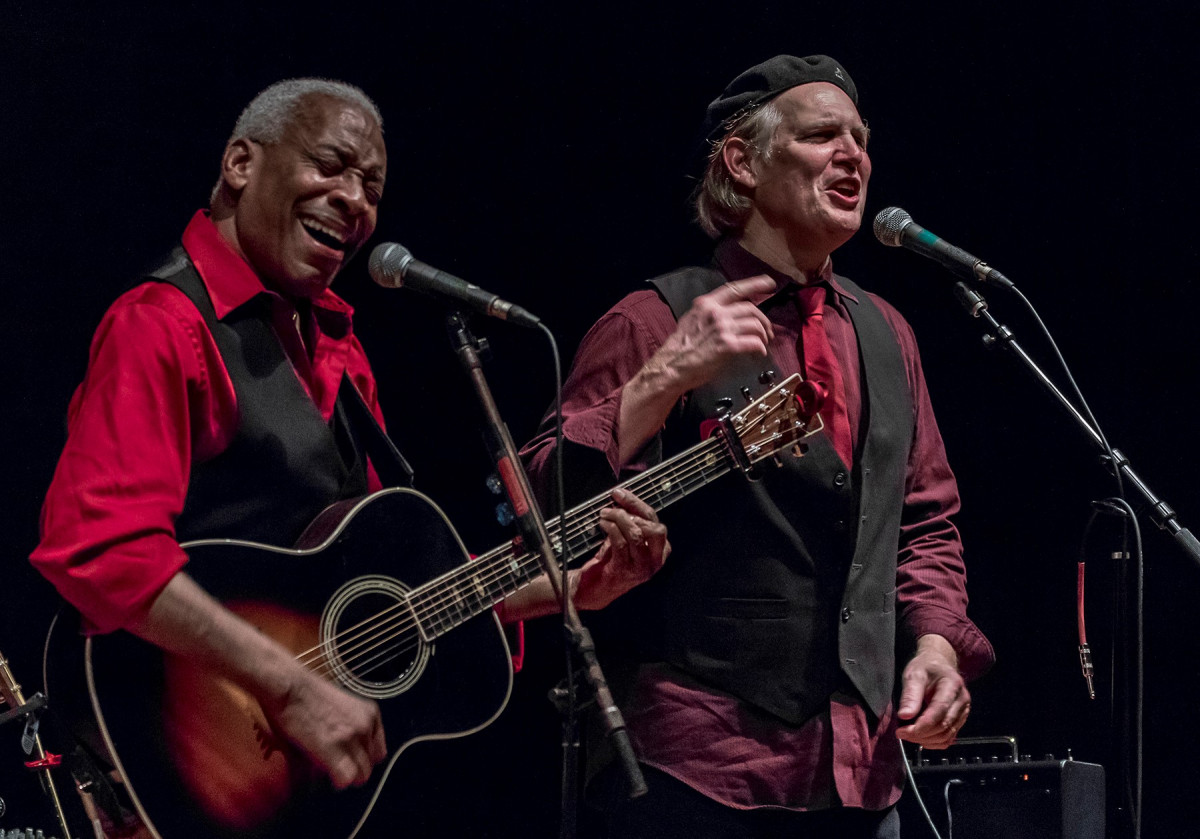 Guitarist and vocalist Reggie Harris saw singer-songwriter Greg Greenway perform onstage in Cleveland before they officially met at Village Gate in Greenwich Village in the 1980s.

“We fell into a conversation, discovered instantly that we had a lot in common — not to mention that we’re born three days apart,” Harris said. “But it was the music connecting to passion, the fact that (Greenway) was a white man who was already reading and thinking about race (and) was already tied into songs of civil rights and impact.”

As a Black man, Harris appreciated how Greenway spoke on these issues when other white musicians tried as hard as they could to avoid topics about race. This, along with their love of music and the right ingredients for a friendship, kept them in touch and led them to become the duo Deeper Than The Skin.

At 3:30 p.m. Monday, Aug. 22 in Norton Hall, they come to Chautauqua Institution to perform their concert consisting of both music and some discussion, as they sing about race and racism.

Music is an essential element to all they do.

“Reggie has long told me that human beings are hardwired for story and song,” Greenway said. “And what we have is a remarkable story to tell.”

Greenway is a native of Richmond, Virginia, and Harris grew up in Philadelphia. But both of them can trace their heritage to the James River area; Harris has enslaved ancestors who lived on a plantation just outside of Richmond.

“I grew up in the Lost Cause culture of the South, where the Confederate flags and the statues were all normal,” Greenway said. “As I grew up, the dissonance with that culture grew and grew and grew until what I saw was larger than the story I’d been told.”

This dissonance that Greenway felt led him out of Virginia and up North to ultimately meet Harris. Even on their first meeting, they talked about these experiences, which Harris believes is not something people are naturally skilled in.

“The ability to balance and confront complexity is one of the things that I think Americans are probably least good at,” Harris said. “In terms of not only what we’re presenting but also just our own personal narratives, it’s been very important over the course of years to really examine our own lives, to examine our own prejudices, to examine the path that we’ve been on and how those paths have been very different.”

The pair feel that their roles in concerts are distinctive because of their individual perspectives; what makes them work well together is a matter of personality.

“The thing I really appreciate about Greg — just from almost the time that we met — is just his openness and his fearlessness for taking on new lines of thought and for being wrong,” Harris said.

Harris feels that people often get stuck and refuse to talk about race because they are afraid to be wrong. Removing one’s ego is key to having these conversations, and Harris and Greenway work to model this for audiences.

“Our humanity and our willingness to share that with an audience, I think, is one of our greatest strengths,” Harris said.

Modeling their dedication to openness, they acknowledge that Greenway will never know what it is like to be a Black man, and Harris feels the impact of that, particularly when they perform.

For a while, Greenway did not think that their anti-racism concerts were all that courageous, but for Harris, it took an immense amount of courage.

“Every single time I enter a building, I’m thinking about the possibility that it might be the last time. Our social location in the world has made it possible for Greg to feel that this doesn’t take courage,” Harris said. “With recent events and with all that we see around us, the level of danger that is engendered by the very fact that we are willing to stand on that stage together is never ever taken for granted by me.”

Greenway recognizes the privilege he has as a white man, as this fear does not plague his every movement.

“It’s a luxury that a white male has to move freely in the country,” Greenway said.

Even though Greenway can never fully comprehend Harris’ experience, Harris knows Greenway is the right person to do this work with because Greenway did this work before he met Harris, and continues it when he’s not around. Harris feels that he has an “ally and a brother” in Greenway.

The topics Deeper Than The Skin will sing about are tough, but they won’t only address the pain racism has caused.

“We need to always point out that working on these issues is not all about the negative, it’s about joy,” Harris said. “It’s about the fact that if we work toward these issues of justice and equity, we actually are producing a better world for people, so that the joy and happiness in everyday life is multiplied.”

In the world we are kingdom builders, partners with God, Rev. Natalie Hanson preaches