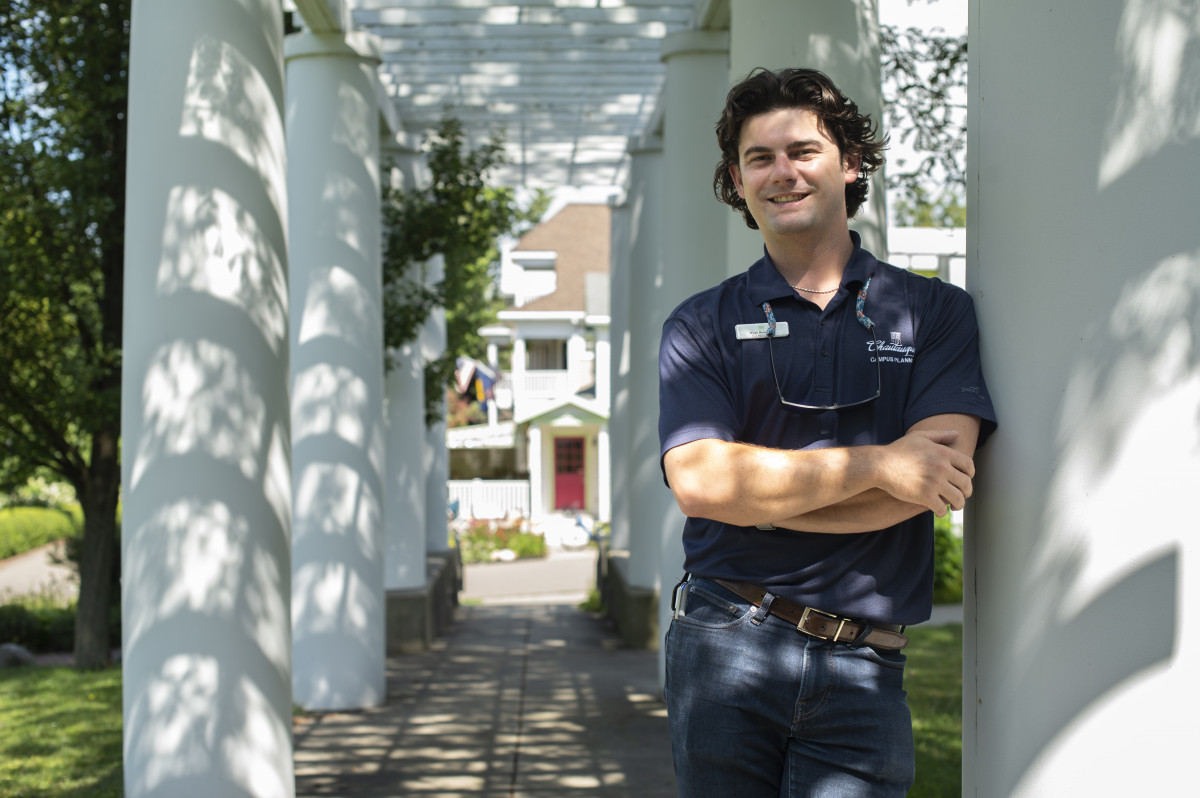 The building blocks that constructed Ryan Boughton’s interest in architecture were erected at a young age. By the time he went on a mission trip to Haiti at age 16, the blueprints were finalized. While there, he worked to help build a school, designed by an architect from the Chautauqua community. “It’s one of those things, to really see the difference that design could make,” he said.

Eight months ago, Boughton brought his love of architecture to Chautauqua as the Institution’s capital project manager and administrator of architectural and land use regulations — but growing up in the county, he’s no stranger to the area.

“I’ve been coming to Chautauqua since I was a kid. My parents used to take me over here for shows. … It’s where I learned how to golf,” Boughton said.

Boughton graduated with a Master of Architecture from Virginia Tech in 2020. To him, it only made sense to continue his professional career at Chautauqua. In his interview for the job, he told Vice President of Campus Planning and Operations John Shedd he’d probably be taking vacation time to be on the grounds anyways.

“Having a job where I get to be a part of this community, and hopefully benefit it, just seemed like the right fit,” Boughton said.

Through his time at a firm in Virginia, Boughton helped work on the Student Athletic Performance Center at Virginia Tech.

“The design of campuses like that … definitely brought a lot to the table as far as how I think about Chautauqua as a place, as a campus,” Boughton said, “and the things that we can do on the grounds to continue the traditions here and make it a place where people can come, learn and grow but also relax and enjoy.”

In his short time here, Boughton has already had a hand in various phases of numerous projects, like the construction of the new maintenance facility behind the overflow parking lots.

“It’s been a great opportunity to really become close with a lot of the buildings, grounds and gardens personnel and to figure out how they work through the process of having this new building constructed,” he said. “It has been a great learning experience. I feel much more connected to all those folks now, and we’re all very grateful for the opportunity to build a new space for them.”

Boughton’s position is multifaceted, with a large focus on capital projects, while also working with property owners with the Institution’s Architecture and Land Use Regulations.

“Being able to engage with prospective and current property owners, as well as realtors and contractors around the area, is something that I do on a day-to-day basis, and I’m glad to be able to be in the greater community with projects outside of what’s going on for Institution facilities,” he said.

Boughton is already looking forward to what comes after the summer season in his work.

“I’m very excited for the up-and-coming ‘construction season,’ as a lot of the contractors referred to it,” Boughton said. “I know that sounds contrary to how most people think, but I’m looking forward to engaging with all the contractors again and seeing all of them driving around in their trucks and talking with the various architects that work for everybody in the community.”