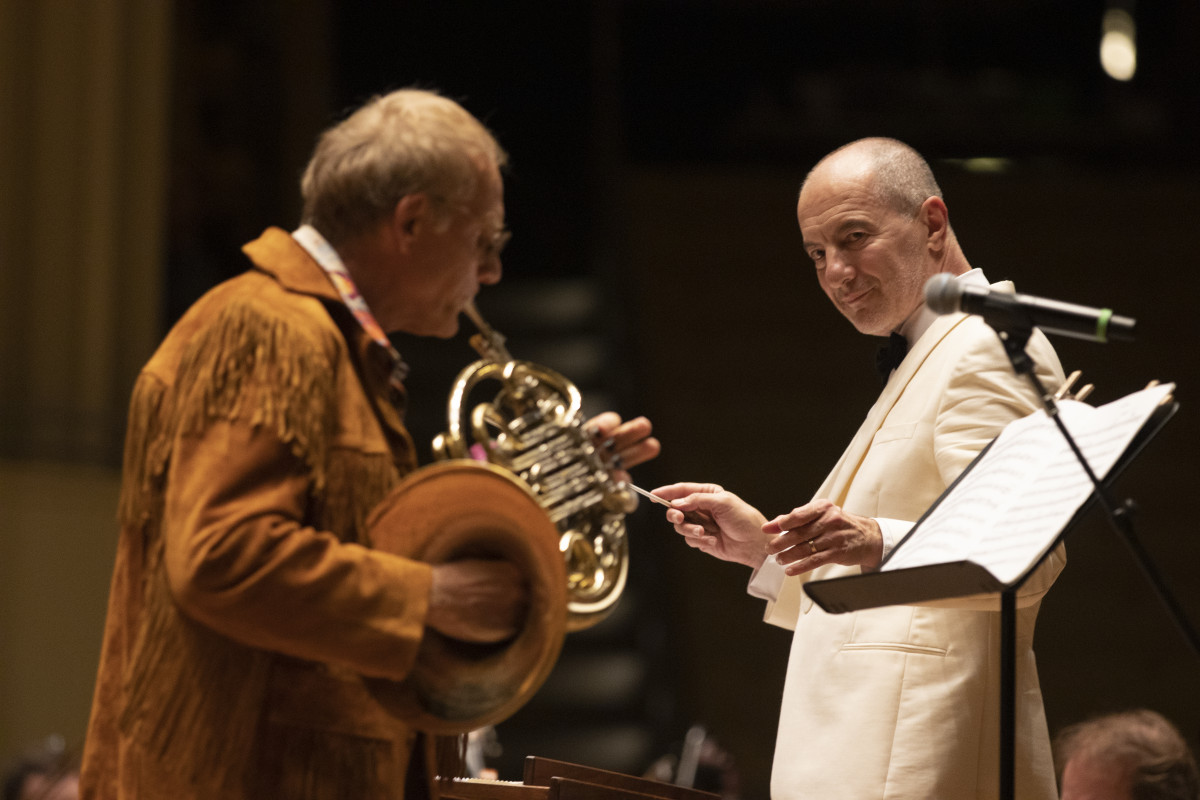 The charm of Chautauqua Symphony Orchestra’s “Wit and Genius” concert was deciding which was which. In this short, entertaining CSO program, presented Tuesday night at the Amphitheater, both of the featured works contained healthy doses of each.

Mozart certainly qualified in both categories. One of the composer’s most famous and tightly constructed creations, his Symphony No. 40, set the standard for musical brilliance and, when played well, as it was Tuesday, epitomized wit in any number of smartly turned phrases.

At the same time, no one could have denied the wit or genius of “Pentangle,” a suite of five songs for horn and orchestra by Peter Schickele, the beloved “discoverer” of P.D.Q. Bach and a serious composer in his own right. It, too, came across as the product of a mind both gifted and comic, a work of pure, wonderful invention.

The choice wouldn’t have been nearly so difficult if the performances hadn’t been so thoroughly engaging. There was no real need, of course, to label one work wit and the other genius. Still, the feisty, colorful readings by the CSO and Music Director Rossen Milanov begged one to listen closely and at least make the attempt.

Name a quality that defines good Mozart and chances are it was present Tuesday. Given more time, Milanov might have tightened the ensemble here, adjusted the textural clarity or balance there, but on the whole, the performance was a model of refinement and collective expression.

The propulsion in the opening Allegro was spot-on, the intricacy of the Menuetto genuinely delightful. The finale, too, was a thing of graceful, driven beauty. The high point, though, was surely the Andante, where Milanov and the CSO took Mozart’s dotted rhythms and turned them into so many eloquent, lyrical expressions.

Credit Roger Kaza for making “Pentangle” the joy it was. Schickele, in 2015, penned the music, five memorable and readily listenable songs for horn and orchestra, but it was the CSO’s principal horn who brought them to life so capably, and played one of the odder roles for horn with such flair.

The work’s roots in 1970s folk rock were particularly apparent in the opening movement, a mellow trance titled Cottonwood Grove, with which Kaza, the CSO and a luminous percussion section cast a powerful spell. They also were clear in the finale, The Riddling Knight, where Kaza sang (with his voice) a lilting ballad when not executing brilliant runs on his horn.

Really, though, “Pentangle” was just more in the way of genius. The second movement, Tom on the Town, saw Kaza and the CSO horn section trading jazzy, swaggering licks, while in the third, Noonsong, the soloist held his listeners captive for a solid 10 minutes with a somber meditation full of quiet, buzzing horn effects.

There was plenty of wit, too. Riffing on the earlier notion of magic, Kaza — at Schickele’s behest — spent an entire snappy movement of the orchestra attempting to play his horn, only to find the instrument plugged by confetti, handkerchiefs and a bouquet of flowers. The only thing louder than the laughs Kaza got then was the applause he and the CSO received when the night drew to a close.