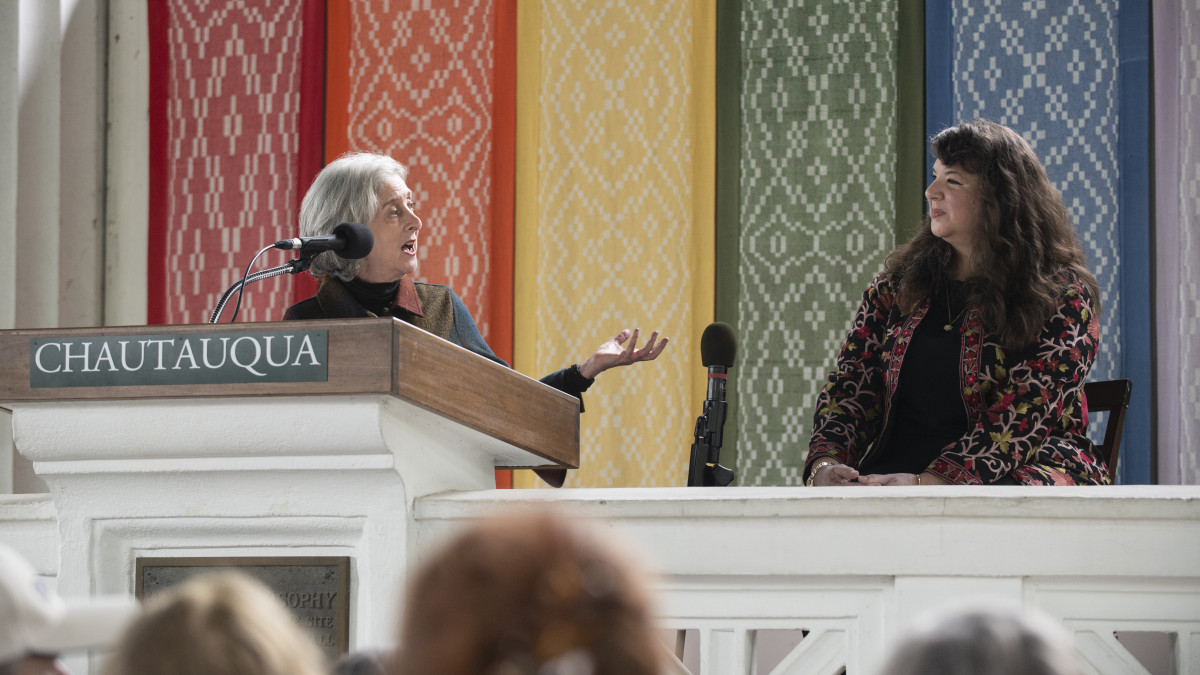 Atiya Aftab and Sheryl Olitzky are an unlikely duo, but their souls may have been destined to intertwine. Aftab, an American Muslim woman, and Olitzky, an American Jewish woman, met on the premise that they wanted to create a space for women of their respective faiths to connect with and humanize one another.

In 2010, the pair co-founded the Sisterhood of Salaam Shalom, a nonprofit organization that works to build trust, respect and relationships between Muslim and Jewish women of all ages.

Continuing Week Eight’s Interfaith Lecture Series theme, “New Profiles in Courage,” Aftab and Olitzky delivered their joint lecture, “Being the Change – A Leap of Faith” on Tuesday, in the Hall of Philosophy. Olitzky began the presentation, while Aftab spoke during the second half of the lecture.

“This is sacred ground, and it’s not a coincidence that we are here today after the horrific Friday that we all experienced,” Olitzky said, acknowledging the attack on Salman Rushdie in the Amphitheater. “We are here today to reinforce that love is stronger than hate.”

While extremist ideologies have existed for years, Olitzky said current levels of extremism have surpassed her expectations. Yet, she is not scared; she is concerned.

“I had a choice: I could sit it out or I could dance,” Olitzky said. “I chose to dance, and I’m inviting all of you to dance with me, to dance with Atiya.”

The Sisterhood of Salaam Shalom currently has anywhere between 5,000 to 7,000 women, ages 14 to over 90, involved in the organization across the United States, Canada and Berlin.

In 2010, the organization, which Olitzky said was never intended to become an organization, started with 12 people. In 2013, it was decided that the Sisterhood would file for nonprofit status. Their organization soon began to expand, as more Jewish and Muslim women wanted to learn more about each other. Chapters were started across the country.

By November 2016, the nonprofit had 25 chapters and hosted a conference with 1,000 women that grabbed the attention of The New York Times.

“(The New York Times wanted) to put us on the front page above the centerfold,” Olitzky said. “The second that hit their front page, we had thousands of women asking to join, so around January, February, we had 150 chapters. And it grew and grew.”

Beyond conferences and conversations, the organization leads annual Building Bridges Trips, which bring members to a location of significant interest to both faith groups.

“The premise of the Sisterhood is very simple,” Olitzky said. “It’s easy to hate someone you don’t know. When you know them, it’s harder. And when you care and love them, it’s almost impossible.”

Aiming to change hate into love and harmony, Olitzky explained the organization’s efforts are based on bottom-up, grassroots initiatives. The sisters share holidays together and learn about each others’ experiences to change negative perceptions and stereotypes.

The Sisterhood of Salaam Shalom was studied by an independent research firm, and the findings offer some insight to how much change is created by the organization.

“(The research) indicated that on average, every person in the Sisterhood of Salaam Shalom talks about the impact that the (Sisterhood) has had to 40 others who are not in the Sisterhood,” Olitzky said. “… We are changing the world.”

Olitzky encouraged the audience to share and listen to the stories of people who are different from them. She said research shows there is no better way to create empathy than through sharing personal anecdotes.

Olitzky shared one of the “a-ha” moments that first called her to contact Aftab and start the Sisterhood. In 2009, when she was leading a group of 40 people in Poland on a visit to Auschwitz, she noticed the lack of diversity among the tourists. She decided to ask the guide about her observation.

“He said, as we’re going into Auschwitz, ‘You’re right,’ ” Olitzky said. “He said, ‘Poland is just for the Poles, and you talk about head coverings. We do not have a Muslim problem here. You won’t see head coverings because they’re not welcome.’ That was my final a-ha moment.”

This calling was all-encompassing, and it led her to contact an Imam she knew who provided Olitzky with Aftab’s contact information.

“I call Atiya. I don’t get a call back,” Olitzky said. “Five minutes later, I emailed her.”

When the pair met, Olitzky described the encounter as electrifying and magical, referring to it as her “hallelujah moment.” She now considers Aftab a sister.

“The heart of what we do is what we call compassionate listening,” Olitzky said. “It’s celebrating what we share in common, but more importantly, celebrating our differences. Diversity is a blessing.”

As Olitzky concluded her portion of the lecture and stepped down from the podium, Aftab stepped up.

“When Sheryl approached me, my response to her was a leap of faith,” Aftab said. “A leap of faith is acting upon your belief. … It’s an act that acknowledges risk, but understands that there are higher values that make the risk worth it.”

In 2010, when Aftab received the messages from Olitzky, she said she had every intention of saying no to her proposal. But due to Olitzky’s persistence, Aftab agreed to meet with her.

“It’s faith that made me accept the hand that she extended to me, to take on this new experiment,” Aftab said. “A Jewish woman was asking to get to know me, to stand up against hate, and specifically stand up against Islamophobia. … I had to say yes, but it wasn’t easy.”

In the past, Aftab had less-than stellar experiences with interfaith dialogue. She found it to “lack a deeper meaning,” which was “quite disappointing.”

Aftab, despite all odds, did not want to be paralyzed by fear and inaction, so she took her leap of faith. The pair agreed to work together under the condition that they would create something different guided through sets of rules.

The Sisterhood of Salaam Shalom would not discuss the Israeli-Palestinian conflict, as they found research showed groups who discussed the conflict fell apart after a couple of years.

“Our focus is going to be on faith,” Aftab said. “We’re women of faith, so we’re going to focus our organization, our chapter, on Muslim-Jewish interfaith. … ​​And when we’re ready, then we’ll get to the rough stuff.”

The organization would also not host gatherings inside their respective places of worship, as they felt it would be a barrier of entry. Instead, they would open their homes to promote personal interactions.

It was also agreed that the Sisterhood would be for women and girls only, as they felt women navigate the world in specific ways. The organization would also only serve Muslim and Jewish women, because they share the commonality of being a minority in the United States.

While Aftab is proud that their organization has been in The New York Times, on the “Today Show” and has its own documentary, “Stranger/Sister,” she finds other facets of the Sisterhood more valuable.

“One of the most meaningful aspects of the Sisterhood are the Building Bridges Trips, because there’s something about when you travel with somebody (that builds a connection),” Aftab said.

In 2016, a group traveled to Bosnia, where they visited a site of genocide, and Albania, where they met with families who had taken in Jewish people during the Holocaust.

Azerbaijan, a Muslim-majority country just north of Iran, was the site of their second trip, as there were two Jewish communities that lived within the Muslim community there.

“What started happening is this goal of just building bridges was now shifting. (It was) shifting from a perspective of getting to know one another across differences to standing up for each other,” Aftab said. “(It shifted to) this idea of justice, this idea of fighting hate and understanding what institutional oppression is.”

While the educational trips continued to Baku, Germany and Poland, members of the Sisterhood began to see themselves as a group fighting hate. Their next destination was Arizona, and the U.S.-Mexico border.

“At this point now, the Sisterhood is issuing … anti-hate statements about what’s going on in China with the Uyghur Muslims, what’s going on in India with Muslims, what’s happening with forced sterilization of women at the border,” Aftab said. “… When we went on the Arizona trip to the to the Mexican border, we met with those who are helping refugees, those who are undocumented.”

When the group learned about a young Mexican boy who tried to cross the wall and was shot and killed by a U.S. border guard, Aftab said “it became very clear that we could not not talk about Palestine and Israel anymore.”

As some sisters attended a board retreat with two days of “intensive facilitated conversation” on Israel and Palestine, the COVID-19 pandemic was imminent. The Sisterhood was able to issue an official statement on Israel-Palestine on Feb. 14, 2020, which Aftab said is “the only statement of its kind of a Muslim-Jewish organization.”

As preparations were being made to embark on a trip to Israel and Palestine, the pandemic hit. The group continued to work with one another online and take virtual field trips.

“But what I wanted to focus on again is this power of travel, this power of standing together and witnessing, and what comes of that,” Aftab said. “I don’t think that we would be able to speak about the issue of Palestine and Israel unless we had that journey together, those steps (from our) first trip to Bosnia and Albania all the way to our trip to the Mexican border.”

Their next in-person journey will hopefully be to Morocco, as these trips bring out deep and sometimes difficult conversations that are necessary for growth.

“These kinds of conversations (develop) meaningful relationships and friendships. … This is all humanizing each other, and we know what happens when there’s dehumanization,” Aftab said. “History recognizes that when we dehumanize one another, it is very easy to engage in violence against the Other. … So to change one person’s mind … is to change the world, and we all have the courage to do that.”