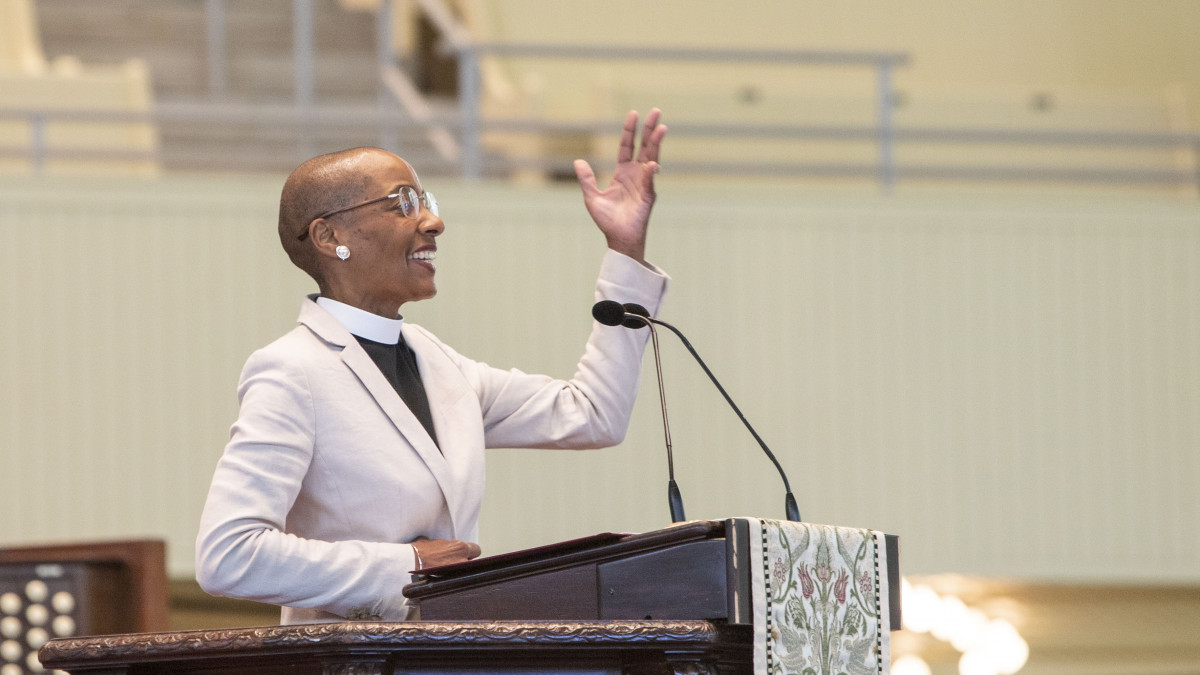 At the 9:15 a.m. Wednesday, Aug. 17 ecumenical worship service in the Amphitheater, the V. Rev. Kelly Brown Douglas preached a sermon titled “A Soul-full People: ‘U,’ ” where the “U” stands for “unburdened.”

Douglas told the story of Elijah McClain, a 23-year-old, 140-pound Black man, who said to police in August 2019, “I am an introvert. Please respect my boundaries that I am speaking.”

He was a massage therapist and an animal lover. There are videos of Elijah playing the violin to stray cats because he believed that music helped to calm them. Someone called 911 because they thought that Elijah looked suspicious. He was regarded as a dangerous Black body, not as someone’s child. He was trying to get home safely after purchasing tea. Elijah died after he was placed in a chokehold and injected with an illegal dose of a sedative.

Trayvon Martin was also murdered because of his race. Douglas said that Trayvon’s parents hoped that the six women who sat on the jury during his killer’s trial would see that 17-year-old Trayvon was not a threat. His parents hoped that the jury would see that he was someone’s son. He was a boy who loved sports and wanted to be an aviation mechanic or a pilot. The jury, Douglas said, did not see Trayvon in this way. Instead, a teenager was held accountable for his own murder and the murderer was set free.

In The Courage to Be, Paul Tillich wrote about the children of God needing to free themselves from anxiety. Douglas said that to be people of soul, we must unburden ourselves from the presumption or privilege of believing that we are more special or worthy than other people and that others are less special or worthy. We must unburden ourselves of notions that distort the sacred dignity of others.

Douglas said that her sister has a saying: “We are all just dressed up dirt.”

All of us, sacred creations of God, are made of dust and to dust we shall return. As dust, we need to unburden ourselves from whatever it is that prevents us from engaging in what Howard Thurman called “sympathetic understanding.”

Douglas introduced the concept of kenosis, the theological idea that Jesus emptied himself of his divine nature in the incarnation so that he was able to fully participate and share in our humanity. Just so, she said, we must empty ourselves of everything that prevents us from seeing ourselves in others and seeing them in us. This is what it means to be unburdened.

Continuing to explain what it means to be unburdened, Douglas returned to the morning’s Scripture, Matthew 7: 9-12.

Everything comes down to the Golden Rule, she said. She cited Karen Armstrong’s research and commentary that every major religion shares some version of the Golden Rule. Confucius framed the rule as: “Do not impose on others what you do not wish for yourself.”

In this way, he believed that practitioners of the rule could fend off harm.

Douglas repeated a Talmudic story from the Jewish tradition in which Rabbi Hillel was asked by a skeptical Roman if he could teach the entire Torah while standing on one foot.

“What is hateful to you, do not do to others,” Hillel responded.

Douglas said Jesus gave us another version of the rule:

To unburden ourselves means to live by the Golden Rule. Given where the world is in 2022, Douglas said, it is obviously much easier to say the Golden Rule than apply it to our lives. It is hard to free ourselves from prejudice, to see ourselves in others. But, she said, there are ways to imagine impossible possibilities.

Douglas invited the congregation into a call and response. She joked that since she is an Episcopalian and Episcopalians don’t like to talk, she was only going to ask people to raise their hands.

“Who here wants enough food to eat every day?” she asked. Everyone raised their hand.

“Who wants a decent house to live in?” Everyone raised their hand and a dog barked. Douglas said that she would include even dogs as deserving of decent shelter.

Douglas continued with the questions — “Who wants decent health care?” “Who would like to feel safe getting where you want to go?”

The bottom line, Douglas said, is that we must not withhold from others what we do not want to have withheld from ourselves. She said that our task as people of soul is to go about creating that world. We need to live unburdened from the idea that anyone is more, or less, worthy of life, food or health. Everyone deserves to wake up and go to sleep safely, to enjoy a barbecue or go birdwatching.

Douglas said that in order to live as people of soul in this nation with a warring soul, we must be accountable to God’s just future, unburdened of the sins that end lives and kill dreams.