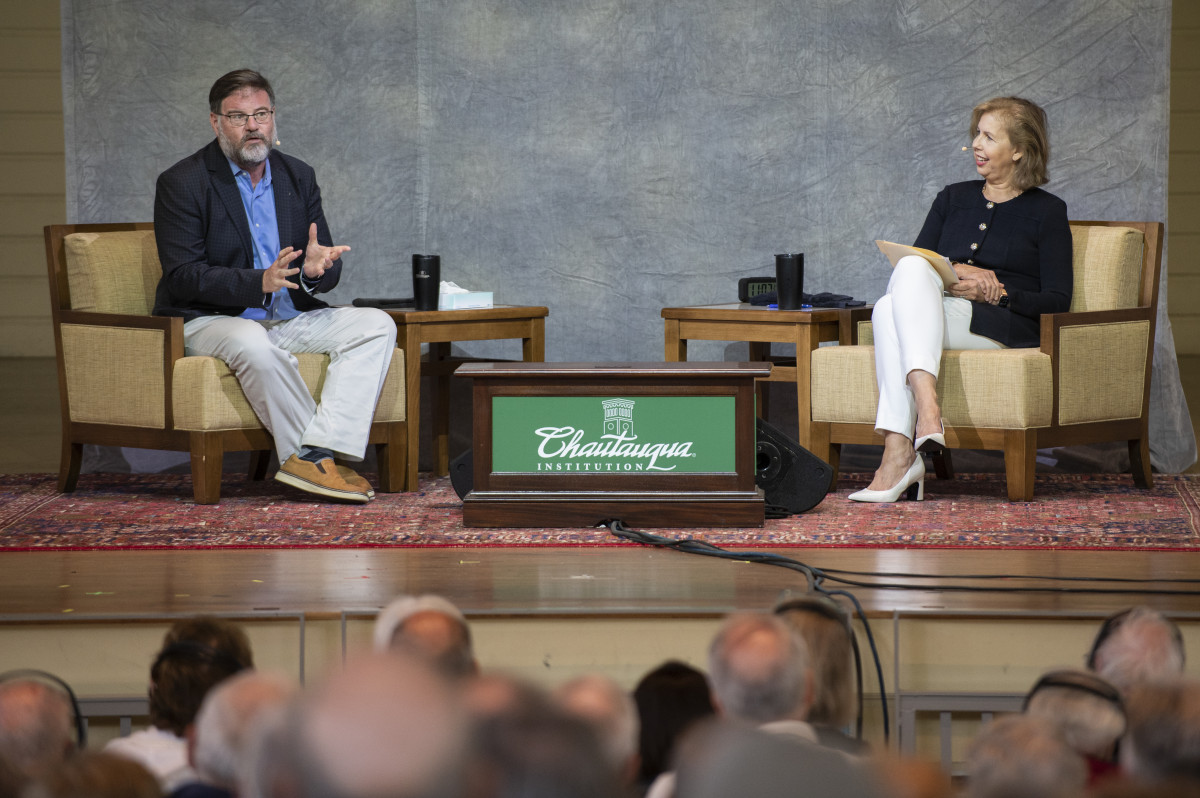 Ernest Hemingway once explained bankruptcy like this: It’s gradual for a long time, and then it’s sudden.

This idea, of gradually into suddenly, of slowly and then all at once, was a frequent theme during Wednesday morning’s Chautauqua Lecture Series presentation in the Amphitheater with Jonah Goldberg, the co-founder and editor-in-chief of The Dispatch and the former senior editor of National Review.

He was interviewed by Nancy Gibbs, director of the Shorenstein Center on Media, Politics and Public Policy at Harvard University and former managing editor of Time. Their discussion was part of Week Eight’s joint-platform theme, “New Profiles in Courage.”

Goldberg’s conversation moved among the decay of media, to the shift of the nation’s highest office from presidency to performance, and the crumbling of institutions and parties. And it all started with Gibbs’ opening prompt: Let’s start with the news.

Tuesday evening, U.S. Rep. Liz Cheney (R-Wyo) lost her primary by more than 30 percentage points; it was predicted, and speculation is already mounting that Cheney will launch a presidential bid.

“What I’ll often tell people is there’s a number of ‘closet normals,’ ” Goldberg said — the politicians who will say one thing when there’s no cameras around, and another thing if there is, who pretend that “somebody else would deal with Donald Trump, or … that the party hasn’t really changed.” He considered Cheney a closet normal until Jan. 6.

“I salute her bravery and courage, and we’re supposed to talk about courage these days,” he said. “I get very, very frustrated with a lot of my friends on the right who will say, ‘Look, I don’t want Republicans to compromise their principles on important things, but we also have to be practical about political reality.’ My view is that if you can’t tell the truth about Donald Trump and about what’s going on on the right, then you have compromised your principles.”

That idea, of saying one thing in public and another in private, is one of the reasons Goldberg left Fox News as a commentator in 2021. Gibbs pointed out how many moments, especially recently with the FBI raid on Mar-a-Lago, seemed to be the moment that would “break the pattern of people saying one thing in private and another in public,” and yet Cheney is still out there “largely by herself.”

It goes back to Hemingway’s explanation of bankruptcy, and Goldberg pointed to the shift Trump represented from a president leading the people, to people leading the president.

“The problem is that Donald Trump was only responsive to praise. If you criticized him, he would go the other way,” he said. “… He has this oppositional disorder, and so politicians would go on TV and only praise him, because that was the only way you could influence him, and over time, that’s all the audiences wanted to hear as well.”

As the audience goes, so goes the market; yet another part of the problem is that the market and its consumers “tend to follow politics like it’s a form of entertainment,” Goldberg said.

Politicians become heroes, and once they’re heroes, voters don’t care about policy — they care about winning. Goldberg, a conservative and a fellow at both the National Review Institute and the American Enterprise Institute, pointed to how the hero-worship of politicians extends to the Democratic Party, as well.

“(Obama) did an enormous number of things that violated principles, constitutional principles, that were troubling and problematic,” Goldberg said. “… People didn’t care. They cared about the winning.”

With politics as a form of entertainment, or even what Goldberg described as “a religious, existential struggle,” cultural ideas like the alpha male move to the forefront. Gibbs asked him to discuss the idea of a masculinity crisis in America. The definition of manhood bandied about by people like U.S. Senator Josh Hawley, Goldberg said, is “basically juvenile, puerile, self-serving. It elevates rudeness to a virtue.”

Politics, going back to Aristotle, are supposed to be about persuasion, not performance or punitiveness.

And with the increasingly incentivized structure of the media landscape that, by definition, turns not just politicians, but pundits like Goldberg himself, into entertainers, the narrative becomes more important than the facts.

“I think one of the things that, as a society, we have a real problem with — and a lot of it has to do with the decline of religion in society and the decline of the family and the decline of healthy local communities — is that one of the reasons why we’re turning to politics as a sort of religious, narrative form of entertainment is because we are hungering for a sense of community and meaning in this country,” Goldberg said.

“That’s what’s happening: We are taking partisan identities and coming to the mistaken conclusion that we can fill the holes in our souls with it, and we can’t,” he said. “That makes us angry and that makes us fight and cling to the stuff even harder.”

Both parties are guilty of it, and it ties back to the shift from politician to performer, to the need for a narrative of winning, and to the religious zeal people place, Goldberg said, on “presidents like they are God-kings.”

Gibbs noted that along with that, America is also seeing an “enormous rise in really negative attitudes towards the other side. And in fact, that the parties are mainly defining themselves by their opposition to the other.”

Goldberg equates it to his favorite The New Yorker cartoon, of two dogs in a fancy bar, wearing fancy suits. One says to the other: “You know, it’s not good enough that dogs succeed. Cats must also fail.”

“Both parties are basically the ‘Cats Must Also Fail Party.’ They care more about the other side losing than their own side winning,” Goldberg said. “… This is part of the gradual and sudden problem.”

Institutions like mainstream media, amplified by the steroids of social media, have eroded trust. Other elite institutions have, as well, Goldberg said — and it’s again because those platforms are used for performance. Institutions, like the Marines or the Boy Scouts, are supposed to mold character, he said.

“We live in a time where people have no respect for the role of the institution or their role within the institution, and instead they use it as a platform for their own cult of personality, their own celebrity,” Goldberg said.

Colin Kaepernick may have been right, Goldberg said, about the issues of police brutality, but he used the NFL as a platform for his issues. Journalists do it, too, and Trump “used the presidency as an institution for his own personal needs … his own celebrity.”

The 2009 rise of the Tea Party saw “a kind of psychic break,” and the idea among voters that “ ‘if they’re going to call us deplorables, we might as well act like it,’ ” Goldberg said.

Any sort of confidence in or presumption of good faith from the other side was lost, Goldberg said. If good character is defined in partisan terms, by definition, he said, no one knows what good character is anymore.

Gibbs turned the conversation to the academic debate on basic structural voting reform — Goldberg outlined the merits of a jungle general primary, but said that personally, he’d get rid of primaries entirely. In an era of significant polarization, the old patterns and habits don’t work anymore.

Weak parties create strong partisanship, he said, so both Democrats and Republicans have work to do. He described the idea of getting rid of the Electoral College as a “red herring” and a “siren song.”

Gibbs closed her interview by asking Goldberg to expand on something he recently wrote: that people on the left are waiting for a “mass atonement” from the Republican Party, by virtue of the right moving past Trump. Goldberg thinks that’s unrealistic, and not how America will move forward.

Goldberg does hope that the party moves on, that “the fever goes away,” because he cares more about “the transformation of rank-and-file Republicans … normal, decent American citizens, many of whom now, I think, are enthralled or brainwashed by a crazy narrative about what’s going on with America.”

That narrative, Goldberg said, makes it normal to say that the FBI is the Gestapo, or normal to say that “we need a civil war,” and makes space in the Republican Party for politicians to dabble in Holocaust denial — space for the “views of people who have really, in some cases, truly evil positions.”

Too many of those who carry such views have started to gain power and control in various states, Goldberg said, and once more drawing on the idea of “gradual, then sudden,” he recalled a scene from “The Simpsons.”

While the Democratic Party has lost its rationale for coalition, Goldberg said, that’s not the same as the  moral problems that exist within the GOP. He could see one of these two parties dying, and returned to the idea of The New Yorker cartoon.

“The ‘Cats Must Fail’ thing kicks in,” he said. “In an era of negative polarization, if the reason for one party to exist is because they hate the other party so much, when one party dies, the other party loses its reason to live. I can see us having a major scrambling of the nature (of the two parties in) what they stand for. What they are could be very different in 10 years’ time. And that would probably be a good thing.”