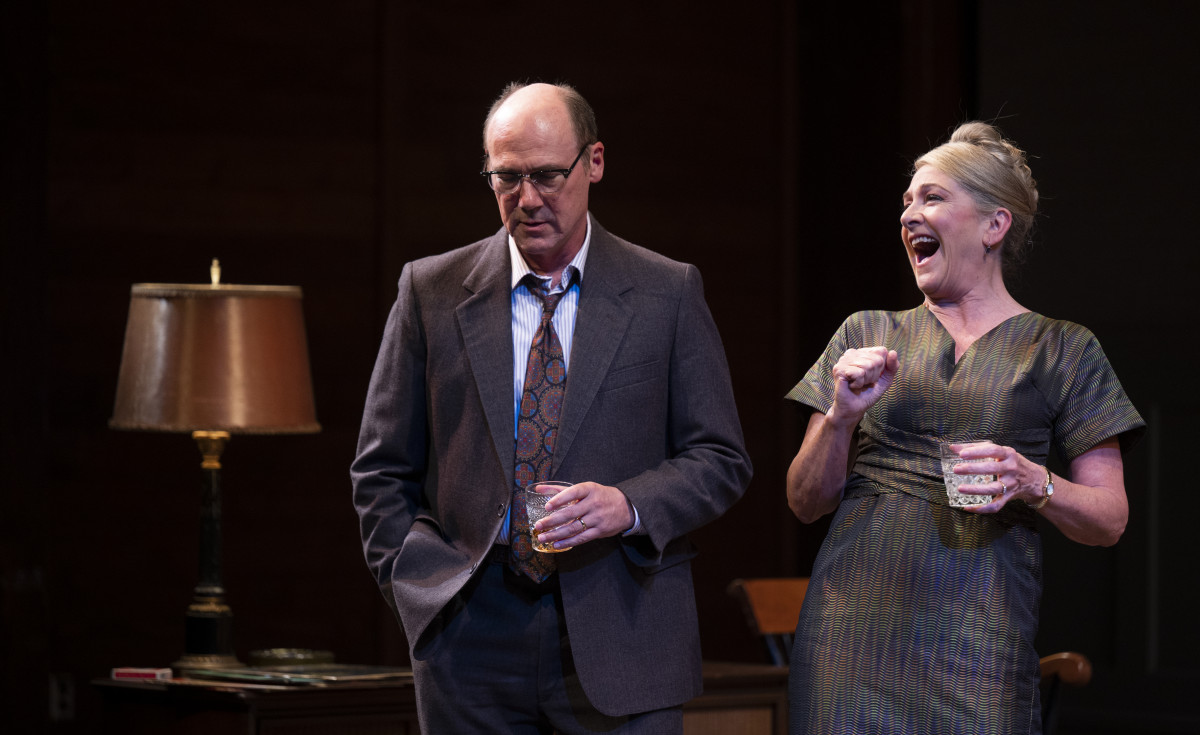 The whip-smart verbal sparring of George and Martha, one of the couples at the center of Edward Albee’s Who’s Afraid of Virginia Woolf?, could be described as an intellectual prizefight, or a surgically precise chess match. For Andrea Hood, the costume designer for Chautauqua Theater Company’s production of the play, it’s like Dungeons & Dragons.

The fantasy role-play game reminds Hood of George and Martha’s performative and competitive dynamic. The couple’s 23-year marriage is defined by festering resentments and combative gamesmanship. They have their own private world, and it’s a slurry of truth and illusion.

“They have this fictional world that they’ve created together in their isolation of people, places and events that never happened,” Hood said. “It weirdly reminds me of Dungeons & Dragons, because it’s a narrative that’s fun, and it’s so elaborate, it feels real. It’s like they’re in a role-playing fantasy game that’s mean. The quest is who can hurt each other the most.”

George and Martha invite a young new-in-town couple, Nick and Honey, to their home for an impromptu afterparty. This 2 a.m. soiree follows a faculty party at the university where George works as a professor, where Martha’s father is the president and where Nick is a newly hired professor. The drunken evening finds George and Martha ensnaring Nick and Honey in their warped games. CTC’s production of Who’s Afraid of Virginia Woolf? will continue its run at 4 p.m. today in Bratton Theater.

Hood’s approach to design aesthetics is tailored to whatever project is at hand. Designing the costumes for Virginia Woolf was like putting together an intricate puzzle.

“I really loved doing this show in particular, because it’s such a small psychological piece in terms of costumes,” Hood said. “It’s very character-based, and you want all the little pieces to add up to be the person that you’re looking at, which is a very complex character, a very contradictory character.”

Along with having psychologically intricate characters, the play is set in the context of a small college in the 1960s. In the interest of period authenticity, Hood did ample research. She scoured eBay for yearbooks for small, private liberal arts colleges like the one that connects the characters of Virginia Woolf. She found four or five such yearbooks from the span of 1959 to 1961 (the play was first staged in 1962). Hood also bought Sears catalogs from the same time period, exploring what people’s wardrobes looked like.

Then, Hood thought about each character’s motivations and relationships. Nick wants to make a good first impression on his new colleagues and community, so he is dressed in a sharp, modern suit. George, portrayed by outgoing CTC Artistic Director Andrew Borba, is not as concerned with impressing anyone, so while he wears a suit, his is less polished. Martha wants to impress her father, and she wears the only piece created specifically for this production.

“It’s a very 1961 silhouette,” Hood said. “It’s kind of a trippy fabric. It’s a bronze, zigzag, metallic fabric that has a wrap around the waist and a little pencil skirt. It’s very slick.”

Martha is the only character who changes costumes in the show. Although she is a fiercely intelligent and independent woman, the social norms of the time constrain her independence. That manifests through all of her outfits being designed in relationship to the men in the world of the play: The first dress is to impress her father. Martha changes when the young couple arrives, motivated by a desire to turn Nick’s head. And finally, she puts on George’s cardigan as a way of twisting a particular knife.

Hood was especially thoughtful about designing for Honey. She said that in previous iterations, Honey was represented as very doll-like, embodying a classic trophy wife.

“I think that that’s A), very done already and B), kind of boring and dismissive,” Hood said. “I don’t want to approach any female character like that, even if that’s how they’re written.”

Hood does not think that Edward Albee wrote Honey that way; rather, she is responding to past interpretations of the work. She thinks it’s important to humanize Honey, rather than sketch her in broad, impersonal strokes.

“(Honey) can be such an interesting, empathetic character because she really is the victim of this,” Hood said. “Everything is happening to her, and she didn’t do anything wrong, and it makes it less serious if you don’t see her as a person. I think it’s more interesting to look at it like she’s somebody who got dressed for a party and is going with her husband, and she’s not the definitive trophy wife of 1960s America.”

Although she’s not interested in simply being reactive toward previous interpretations, Hood considers resisting cliches and truthfully representing the setting. George, as a professor, stereotypically wears a cardigan in other productions of Virginia Woolf, but Hood thought that might be too warm for a September evening. She gave the cardigan to Martha instead, a subversion that further underscores Martha and George’s interpersonal turmoil.

Hood also prioritizes consulting with actors about what they want to wear, incorporating their feedback into her design choices.

“Theater is so collaborative,” she said. “I feel like if you do that work when you’re having a conversation with the actor, even though everybody doesn’t always see eye to eye about everything all the time, we’re all working towards the same goal. It’s not about convincing somebody about something. But if you’ve done the work, too, there’s more of an allyship of, we’re working towards the same thing. … I don’t think they perform as well when they don’t feel good about what they’re wearing.”