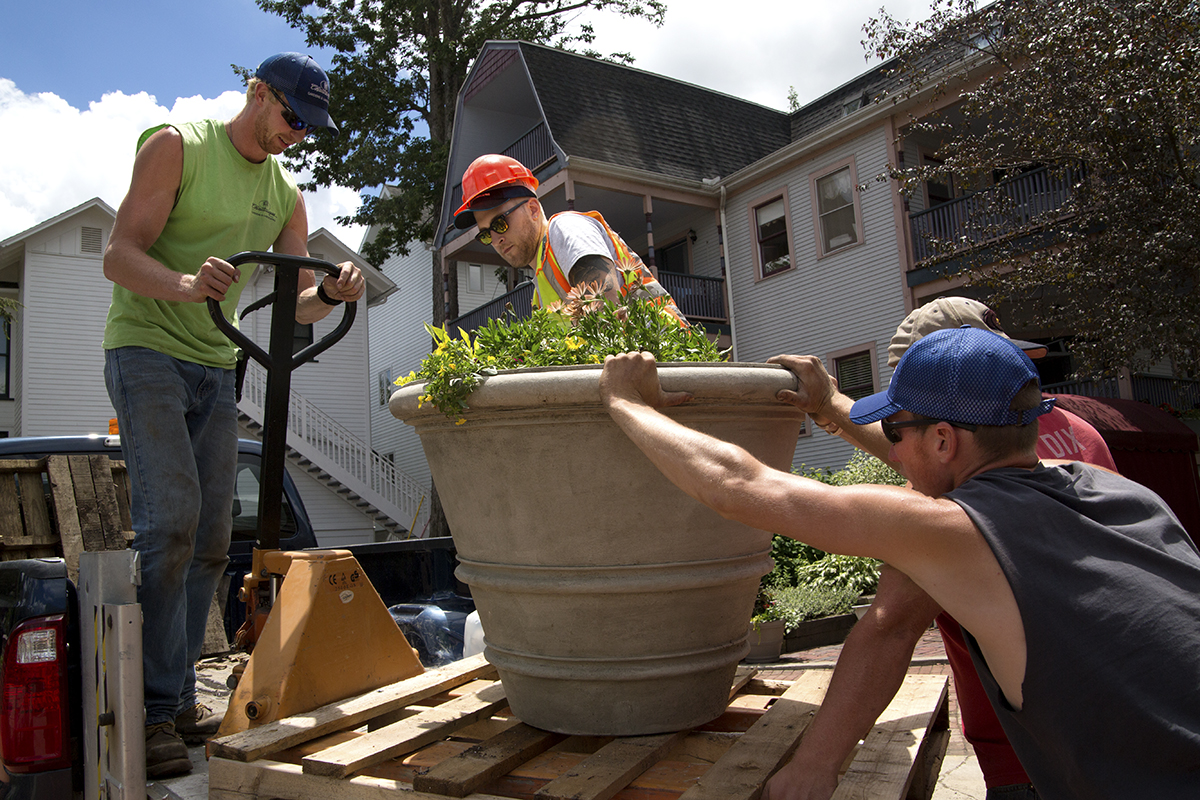 Chautauqua Gardens and Landscaping staff work to unload a flower pot, weiging upwards of 800 pounds. The landscaping crew has been working in overdrive to finish the landscaping around the new Ampitheater in preparation for the 2017 season. ERIN CLARK / PHOTOGRAPHER

Around the grounds, Chautauqua Institution is always frantically busy in the days just before the season begins. This year, activity around the new Amphitheater added to the organized chaos. Directing a significant part of the Amp activity is Supervisor of Gardens and Landscapes Betsy Burgeson.

“Our gardens crews began in earnest in the first half of May,” Burgeson said. “We started out with the first shrubs that will eventually be planted around the new Amp.”

Burgeson said the workers building the Amp called the gardens crew seagulls, for the way “seagulls often track ships at sea, waiting for scraps to be tossed overboard.”

“As soon as the contractors had laid sod around the Amp, we were right there, flying in with mulch for the shrub beds and rain gardens,” Burgeson said. “The mulch holds moisture in the soil after it rains.”

Statistics are part of the new Amp, and Burgeson listed some of her favorites.

“By the time we are finished early in the season, we will have planted 1,298 perennials there, along with 378 shrubs,” she said. “Especially around the back of the house, we have been scrambling up and down hillsides and slopes around the ponds and gardens that fill the small ravine there.”

A total of 53 new trees will be planted around the Amp, with the initial work and first-year maintenance performed by subcontractors to the Amp project’s general contractor, LPCiminelli Inc. of Buffalo.

Part of the Carnahan-Jackson Garden on the southwest side of the Amp will likely remain closed off for up to the first three weeks of the season.

“That was the best place to locate the huge construction crane as the new Amp was erected,” Burgeson said.

Elsewhere, she said, the crews have been busy along North Lake and the shoreline, preparing and planning to prevent another landslide, like the one that occurred in 2014.

“I call our planting crews the mountain goats of the pre-season,” she said.

Trees and shrubs all around the grounds were a big part of the Gardens and Landscapes team’s off-season work. This spring was the last in a three-year comprehensive program of shrub pruning around the grounds, and Burgeson is pleased with the results.

And with better rainfall this year, the pyrotechnic rhododendron explosion in early June simply served to underscore and draw attention to the other flora blooming throughout the Institution.

Last year’s drought led Burgeson to be cautious in implementing a program to plant 100 new trees on the grounds this year.

“I decided to just do 50 in the spring, in case we got hit with another drought,” she said. “We’ll do the other 50 after the season.”

Lack of rainfall has not been the only threat to the Institution’s lush tree canopy, and the gardens staff is concerned about several different tree groups.

There are 83 ash trees on the grounds; all have now been treated to help resist emerald ash borers. The eight elm trees planted around the front of the new Amp are of a hybrid variety resistant to Dutch elm disease. Oak wilt is another scourge that has appeared in nearby areas. Burgeson appealed to Chautauquans to notice oak leaves on or near their property in July.

“We will need help identifying oak wilt,” she said. “Here’s what to do: If your oak tree’s leaves are out now but the leaves start to drop in mid-July, this means the tree may be afflicted with wilt. It is spread by beetles and root fungus and we would like to begin remedial measures as soon as possible if there is an infestation here.”

Trees and who owns them have been perennial questions around the grounds. Burgeson said the general policy is that along most streets, trees within 10 feet of the curb belong to the Institution. Along Vincent, this margin expands to 20-25 feet; along Massey, it’s 40 feet from the curb.

“Just to keep things interesting, though, there are lots of random exceptions,” Burgeson said. “If you have concerns, call us.”

With more than 90 percent of her staff returning, including all seven crew leaders, the gardens supervisor ticked off some her team’s major off-season accomplishments: They redid the flora in the Bellinger Hall courtyard, did a facelift in areas adjacent to the Athenaeum Hotel, Hagen-Wensley House and Sports Club, and buffered lake grasses along the shore.

Additionally, there is new sod for better drainage around the tennis courts, and Sharpe Field has a new infield this year. Gardens have been updated at the President’s Cottage, and the the Peck Rain Garden has new plantings to support monarch butterflies.

“And, as planned, we have installed part of the old red (Peter’s) bridge as part of our Woodlands project behind Bellinger Hall,” Burgeson said. “We preserved the bridge over the winter, and will look for other venues where we can utilize parts of it.”