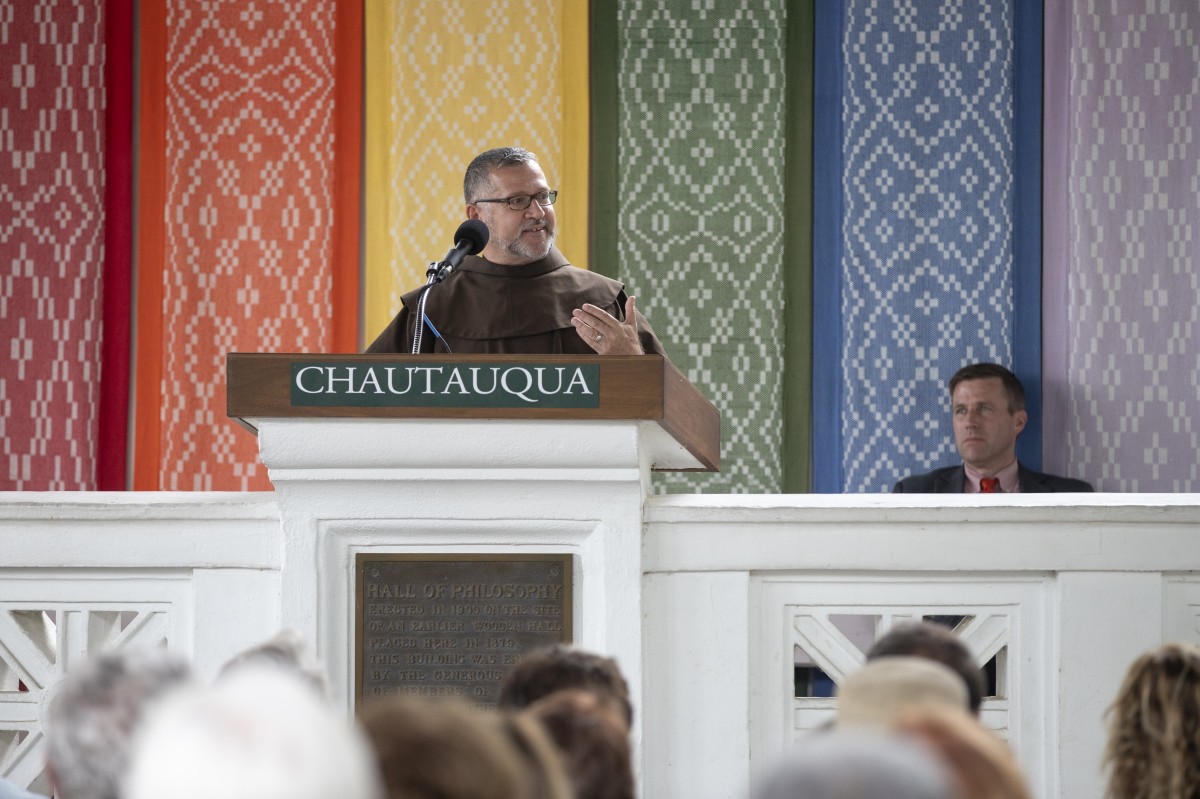 In September 1219, two men met on a bloodied battlefield of the Fifth Crusade.

“Two men, who should have considered the other an enemy, had an encounter in the midst of a bloody war, the Fifth Crusade,” Calabria said, “and came to see one another as friends and, perhaps, brothers.”

That historical meeting is dramatized in the documentary film, “The Sultan and the Saint,” on which Calabria was a consultant. At the 2 p.m. interfaith lecture Tuesday, Aug. 21, in the Hall of Philosophy, Calabria expanded on the film by talking about al-Kamil’s background as the sultan of Egypt and discussing the meeting’s modern-day relevance in his talk titled “The Sultan and the Saint: A Franciscan’s Reflection on an Interfaith Encounter.”

“This encounter clearly has relevance for our own day because of the conflicts that we see around the world, within our own country — conflicts which are not necessarily religious in origin, but nevertheless are often expressed in religious terms, as they were in the 13th century,” said Calabria, who is the founding director for the Center for Arab and Islamic Studies at St. Bonaventure University.

The meeting between the sultan and St. Francis goes beyond interfaith relationships and serves as a paradigm for encountering the “other” in society, Calabria said. St. Francis and al-Kamil went on a personal journey together: first they saw each other as “others,” then each cast that aside and recognized himself in the other person, thus finding the reflection of God in their connection.

“That’s the journey that I believe we all need to take today,” Calabria said.

That journey from religious disagreement to understanding is fundamental in the Franciscans’ way of interacting with people of different faiths, Calabria said.

“The story of this encounter is not why I became a friar,” Calabria said. “But, I would say, it is one of the principal reasons why I remained a friar.”

People of faith have been asked “to other the ‘other’ ” just as the sultan and the saint were asked to do of each other 800 years ago, Calabria said. Now, that call to cast out people of different religions comes from politicians and preachers.

“There is no place in my heart for such othering, and I pray that someday there will be no place in my church and in my country,” Calabria said. “We’re not there yet.”

Al-Kamil was born in Cairo in 1177. At the time, Cairo was one of the world’s largest cities. About 120,000 people lived there, meaning Cairo outpopulated every European city at the time. The Egyptian Empire stretched from modern-day Libya, north through Palestine and Syria, into northern Iraq and western into Arabia to Yemen.

Egypt was where everyone wanted to be, Calabria said. There was a European population in Cairo that was drawn to the trade industry and luxury goods.

“Cairo was truly an international city filled with luxury goods from Africa, South Asia and the Far East that many Europeans craved,” Calabria said.

Egypt was also home to Muslims, Christians and Jews.

Egypt was 30 times bigger than the town of Assisi, which was consisted of a homogenous group of Christians who spoke the same language and had a rudimentary education, Calabria said. At best, Assisi was a “second-rate” economic center, and it was not part of an empire, Calabria said.

Al-Kamil was the son of a diplomat. He grew up witnessing the negotiations of his father, al-Adil, with King Richard I during the Third Crusade. King Richard and al-Adil were close to ending the Crusades because King Richard wanted his sister to marry al-Adil, in hopes of having a Muslim and Christian ruling the Promised Land in union.

“Al-Adil was a prudent and capable ruler. He never rushed to war with the Europeans, no matter how many times he was threatened by European forces. He chose to negotiate treaties unless it was absolutely necessary for him to go to war to defend his realm,” Calabria said. “We must get out of this mentality, this way of thinking that has persisted for so long, that medieval Muslims were on the march to extinguish western Christendom from the face of the Earth.”

It was actually the Christians’ goal in the Crusades to wipe Islam from the face of the Earth, Calabria said.

Franciscans echo this rule, Calabria said. Franciscans urge people not to engage in arguments but to treat the other person as an equal under God’s eye.

The connections between St. Francis’ Christianity and al-Kamil’s Islam were fundamental. The sultan practiced Sufism, which is not a sect of Islam but the “core of Islam,” Calabria said. Sufism emphasizes the imminence of God and his beauty, and it also encourages contemplation and fraternity, Calabria said.

“Is it any wonder that Francis and the sultan had things to talk about?” Calabria said.

The sultan and St. Francis even read poetry inspired by the same person. St. Francis read “The Treasure of Compassion,” a poem by Muhyiddin Ibn ‘Arabi, which used similar language to a Al-Sharīf al-Ranī poem the sultan had read.

“My heart has become capable of every form:

it is a pasture for gazelles and a convent for Christian monks,

and a temple for idols and the pilgrim’s Ka’ba,

and the tables of the Torah and the book of the Quran.

I follow the religion of Love: whatever way Love’s camels take,

that is my religion and my faith.”

“Two men,” Calabria said, “the sultan and Francis, although from vastly different cultures, vastly different in terms of their language, their education, their socioeconomic class — two men ostensibly at war with one another — could nevertheless see one another through and with the eyes of faith.”

The Crusades didn’t end right after St. Francis and al-Kamil’s meeting. Instead, there was call for a Sixth Crusade. The pope ordered Emperor Frederick II of the Holy Roman Empire to take Jerusalem from al-Kamil, who had since been attempting to negotiate peacefully.

Frederick was Norman and had many subjects who were Muslim. Calabria said Frederick would rather negotiate with al-Kamil than start another bloody Crusade.

“And they did simply by negotiating,” Calabria said. “Isn’t that a novel idea?”

Al-Kamil offered up the same deal he had before: he handed over Jerusalem, Bethlehem and Nazareth.

The people who had ordered Frederick to seize Jerusalem were still not happy because he did not fulfill the order to rid the Earth of Muslims, Calabria said.

In the Franciscan constitutions, the word “reverence” appears frequently when talking about people of other faith, Calabria said. The documents say friars should be reverent when speaking with people of other religions.

When Calabria teaches this subject, he asks his students what they see reverence being related to; students usually say the altar and the Gospels.

“So when the constitutions instruct the friars to reverence people of other faith traditions, there is an understanding that therein is an encounter with God,” Calabria said. “This is not tolerance. It’s not even acceptance. It’s been cranked up because of the example of Francis that when I see you, my brother and my sister, be you Jew, Muslim, Buddhist, Hindu … understand that therein is an encounter with the one author of all goodness, beauty and wisdom.”