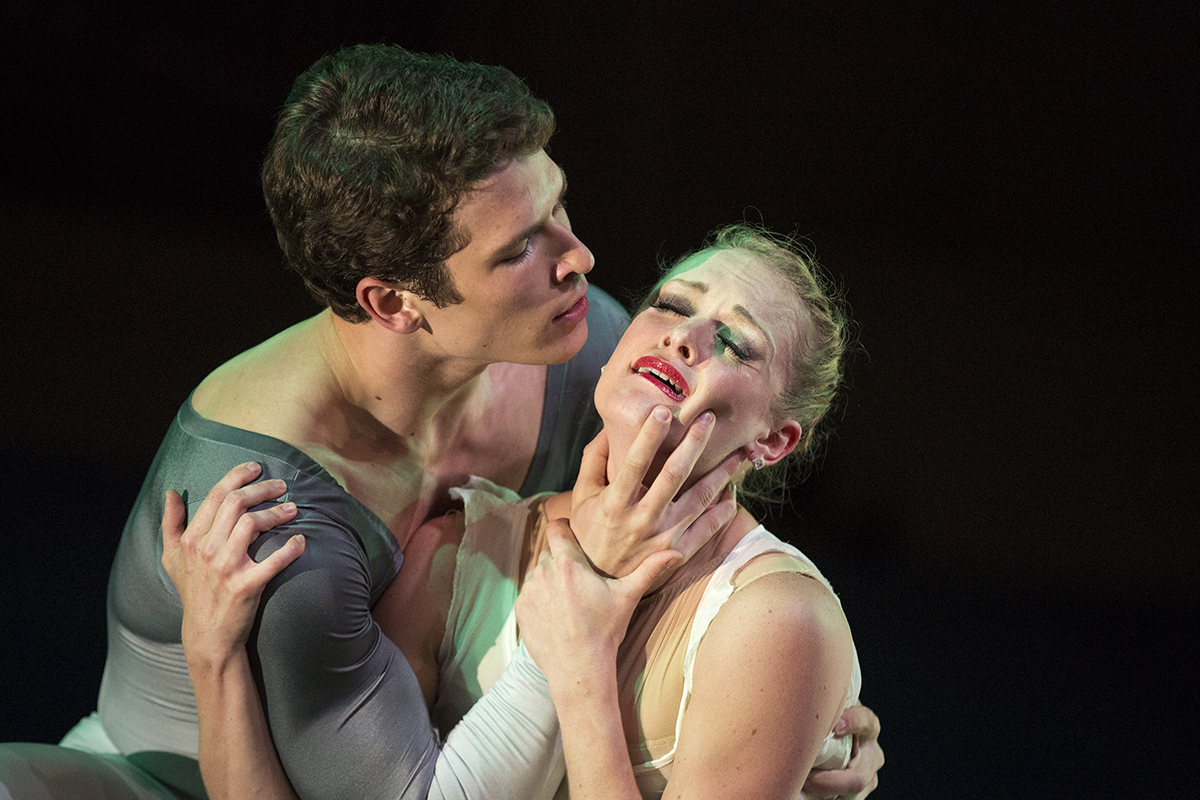 Or rather, it was. Wednesday night in the Amphitheater, Charlotte Ballet got the 2016 summer dance season off to an introspective start with a Dance Salon program stocked nearly to overflowing with pensive, poignant creations.

Not that it fazed the dancers. On the contrary. Almost without exception, the youthful, fresh-faced company — well known and liked at Chautauqua — devoured the program with exceptional athleticism and emotionality. The thoughts its members set boiling on stage kept simmering long after the vessel itself emptied for the night.

Much credit is due the choreographers. Jean-Pierre Bonnefoux and Sasha Janes, the company’s artistic and associate artistic directors, respectively, didn’t always pose their dancers with organic or elegant choreography. Both, though, at least as represented Wednesday, evinced airs for the dramatic and keen senses of dance as theater.

Ballet, in the case of Charlotte, is a broad term. Though clearly uent and steeped in the classical tradition, the company stands apart from its peers for its willingness to engage with the ground, open sensuality and humor, and total incorporation of modern and other dance forms. Boundaries, to them, seem not to exist.

Hands-down the most effective combination Wednesday was Diamond’s “Ever After.” Even without its helpful, explanatory subtitle, its depiction of a woman seeking absolution from past sins gelled and registered with startling clarity.

Moving frenetically to the “Erbarme Dich” aria from Bach’s St. Matthew Passion, Sarah Hayes Harkins took shape as the epitome of angst, a soul in absolute anguish. But her torment did not last long. Following a round of harsh treatment boldly executed by Josh Hall, the full company, in nude tights and accompanied by dissonant choral music, ritualistically embraced the woman, seeming either to forgive or free her.

Absolution was also on the mind of Janes when he created “the red dress,” the program’s finale. Only his narrative was far less straightforward. In fact, it was rather muddled.

Like “Ever After,” “red dress” centered on a woman (the excellent Amelia Sturt-Dilley) yearning for transcendence. And she achieved it, too, going so far at the Amp as to literally rise above her peers by climbing the stage’s back wall.

What happened in between, however, was thought-provoking indeed. Surrounded by parallel versions of herself, people dressed similarly in red, the woman engaged in a series of trios and quartets, rejecting some partners and drawing others close. If there was meaning in there, the nature of it was anybody’s guess.

No program notes were needed to relish Sturt-Dilley’s expressive solo with a stool or the aggressive push-and-pull tango danced by Harkins and Ben Ingel. Simplest of all was the third scene, a charming skit about an artist and sculpture (or mannequin, played by Sarah LaPointe) who comes to frisky life.

Thanks goodness for “Nice n’ Easy,” the opening number. As its title suggests, the suite of four duets by Diamond offset the coming tension, amounting to a piece of balletic cake, even as the actual dancing was anything but.

Sentimental songs by Alan and Marilyn Bergman ranged in mood from flirtatious to melancholic as the lyrical, highly physical duets covered the relationship spectrum from the joy of initial contact to the pain of separation.

For the audience, meanwhile, there were nothing but joys: the gravity-defiant dancing of Juwan Alston, the dramatic presence of Lexi Johnston, and the intensity of Michael Matthews. With so much thought-provoking dance in store, how nice it was to lose our heads at the outset, if only for a few moments.

Zachary Lewis is classical music and dance critic of The Plain Dealer in Cleveland, Ohio.