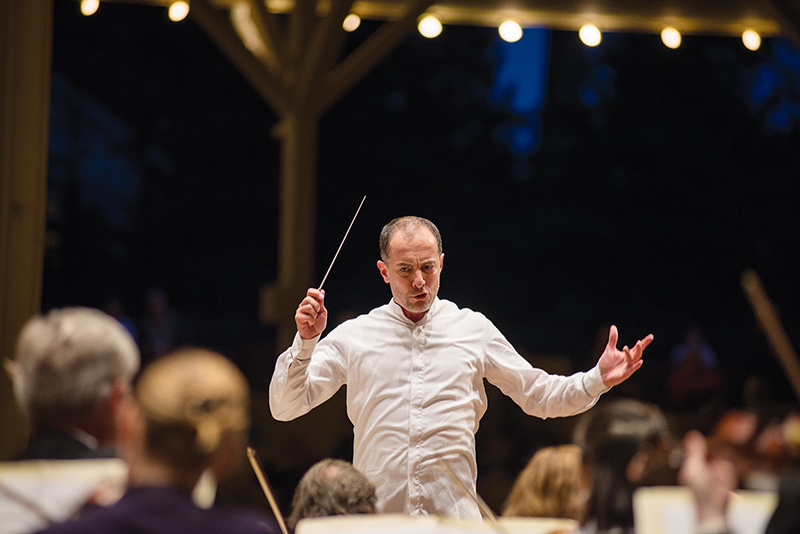 As Rossen Milanov prepares for his second season as music director and  pricipal conductor of the Chautauqua Symphony Orchestra, he remembers his first concert in the role: July 2, 2015.

“The warmth with which the audience accepted me that night is something I will remember for the rest of my life,” Milanov said.

A year later, Milanov said he has begun to grasp the size and depth of the ideas presented at Chautauqua Institution and understand the spirit of cooperation between his programming and all other groups on the grounds.

Focusing on that cooperation, he plans to lead the CSO in collaborations with other artists in an effort to make each performance a special event.

“We really don’t look at the collection of concerts as something that is just numbered or belonging to a particular day,” Milanov said. “We look at them as experiences that are unique, and each one has a lot of interesting ideas.”

Milanov said he looks forward to the inclusion of visual elements in some performances, such as working with Tobias Melle, a German photographer, to illustrate the CSO’s musical journey through videos and images on, July 30.

The CSO also has planned collaborations with the Music School Festival Orchestra and the Columbus Symphony Chorus, the latter of which will sing John Williams tunes in the performance titled “Night at the Movies” on Aug. 20.

“I am very excited about that,” said Milanov, who is also the music director of Columbus Symphony Orchestra. “It is a connection that I think is very natural since lots of people from Columbus come to Chautauqua.

Guest conductors and soloists will visit each week of the season. Milanov has worked with nearly all of the guests before, with the exception of pianist Alexander Korsantia and cellist Felix Fan.

In addition, Milanov wants to focus on ensuring the performances are not intimidating to audience members who don’t have much previous exposure to classical music. The creators of the programs, he said, made conscious decisions about the music selections with that in mind.

Milanov referenced a Sunday matinee performance last year as an example of a family-oriented show that is equally enjoyable for all age ranges. A similar matinee will take place this season on Sunday, Aug. 7.

“The matinee tries to break the barrier between the stage and the audience and include the audience in the creative process,” Milanov said.

With one year behind him, Milanov said the most surprising thing he discovered his first year in the role was the large size of the audience, which he described as stimulating. What wasn’t surprising, he said, was how well the CSO played.

The speed with which the CSO prepares music for a concert and moves from one project to another, Milanov said, sets it apart from other ensembles he has worked with.

Without the luxury of an entire week to prepare one program, as usually granted during the winter months, Milanov said the CSO naturally does not know how every single detail of its performances will go.

“You have to react and listen to what your colleagues are bringing to the stage and incorporate them into your performance,” Milanov said.

That improvisation, he said, brings vitality and freedom to the music.

In addition to CSO performances, the first set for 8:15 p.m. Thursday in the Amphitheater, Milanov will share his passion by teaching three Special Studies classes this season on July 18, July 25 and Aug. 8.

However, he said he wants others to share their passions with him as well.

“I love talking to people and hearing about their experiences and suggestions,” Milanov said. “So, I urge everyone, that if they see me on the grounds, not to be shy and say ‘hello’ and have a conversation. I love that.”