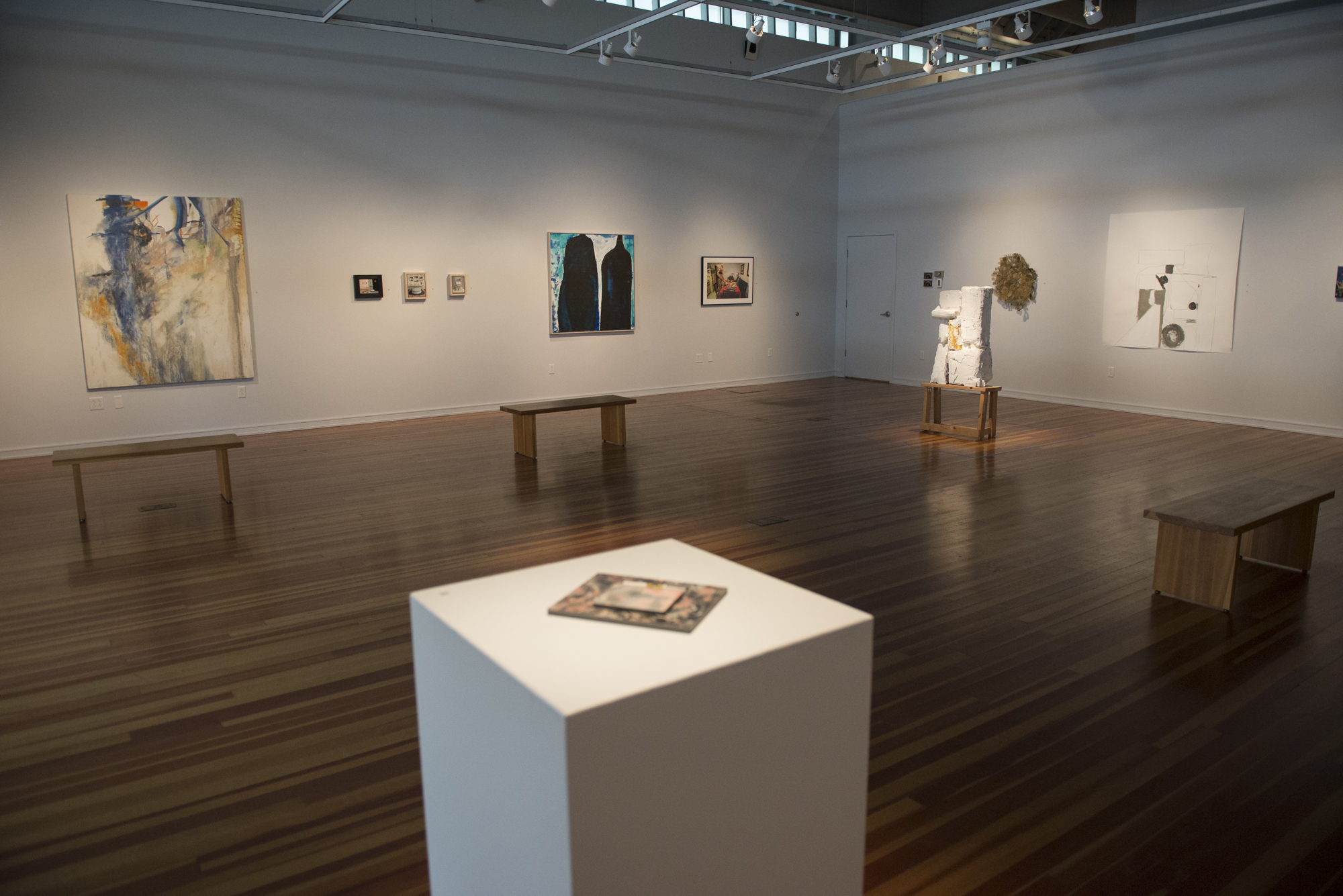 For Betsey Regan, art is all about reinvention. As a survivor of breast cancer and Hurricane Katrina, she uses her studio as an outlet to channel positive emotions.

“Art really saved me. … I just think it’s all about loss and rising above it and being so distraught and then saying, ‘But now I’m happy again,’ ” Regan said. “When you’re an artist, you don’t even give a crap about anything anymore.”

Along with 23 other artists, Regan’s work is featured in the 59th Chautauqua Annual Exhibition of Contemporary Art, which opens at 3 p.m. Sunday in Strohl Art Center. “Flying Soldier,” a painting she is presenting at the exhibition, depicts a soldier doing a split over sharp spikes. Regan said she often tackles serious subjects such as the military in order to add elements of humor and show the soldier rising above the challenge of trench warfare.

Having served in the military as a logistics manager for about 30 years, Regan said it’s important to be able to approach serious work with levity.

“I worked a lot with the soldiers and we had a lot of laughs,” she said. “And sometimes when we were testing the systems, things would go wrong, and it was just like any other job, but don’t you always have to laugh at your job sometimes?”

That ability to have a unique perspective is one of the criteria Steven Harvey, a co-curator of the exhibition, said he looks for in outstanding art, whether for this exhibition or for his own gallery.

“[We select] people who have taken the language of painting a step further,” Harvey said. “It’s really looking for people who have both real fluency in their medium, a real skill and an original vision they’re expressing.”

Like Regan, Brian Giniewski, whose ceramic work will also be on display, aims to bring humor to his art. He said although some of the objects he creates are colorful and could be used as homeware, for the exhibition piece, he used ceramic tile from a home improvement store and a waterjet cutting machine to reshape it into cutouts that don’t look overly crafted.

Giniewski said although he sometimes uses technology such as 3-D printers or robotic machines to create artwork, he tries to put his own “funny or sarcastic” spin on the process.

“Whereas these [tools] were only ever used before to make a process more efficient or more precise, as artists and designers, we approach the use of tools in very different ways, and we can start working with these things in a more cerebral or emotional level,” he said.

Other artists in the exhibition are also manipulating materials in unconventional ways. Atticus Adams works with industrial material like bronze ribbon and stainless wire to create sculptures; Mark Stemwedel repurposes old book covers to paint or draw on; and Mary Mazziotti uses needlework to stitch riddles about death and juxtapose the femininity of needlework against the heaviness of mortality.

Regardless of what the original intention of the artwork was, Stemwedel said he hopes people who visit the exhibition can develop their own interpretations of the works.

“As human beings, we’re always searching for meaning in things, whether it’s there or not — that’s how we need to make sense of the world,” he said. “It plays off surrealistic ideas about juxtaposition and taking very different elements and putting them together in a particular context. … They’re forced to create a new meaning.”