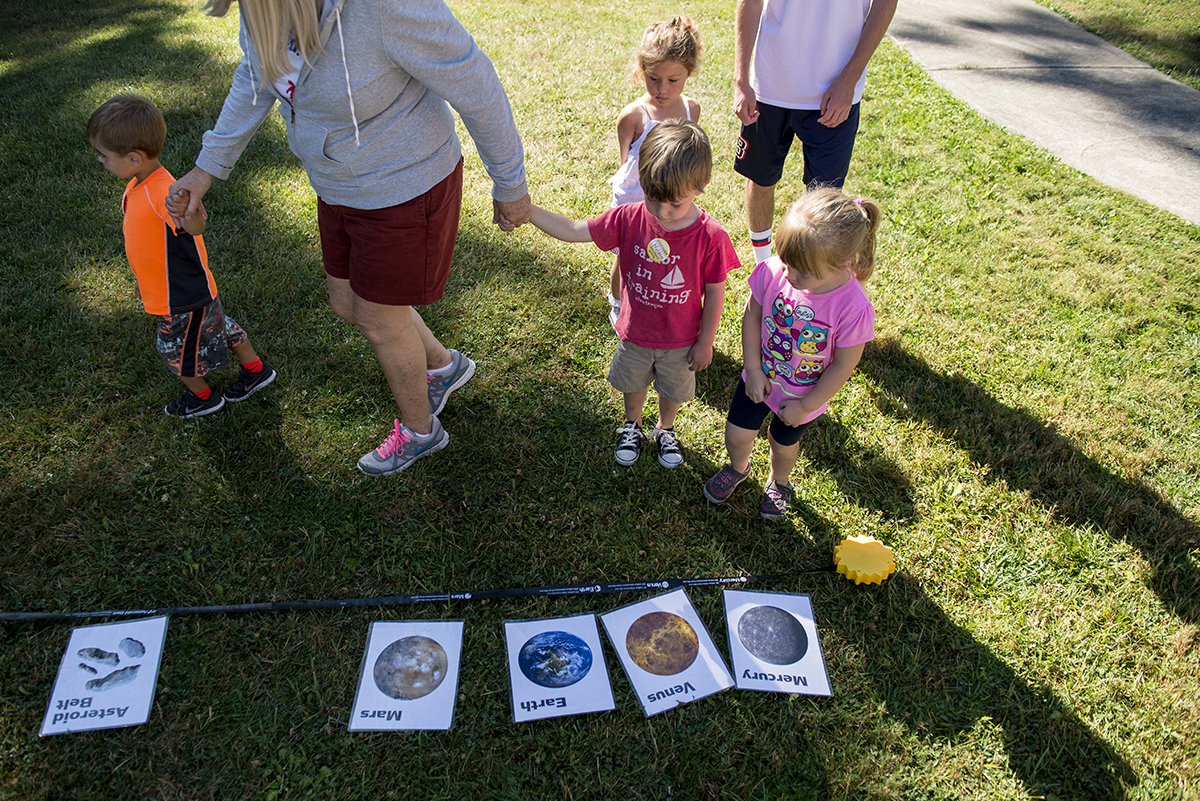 Children’s School students have ample exposure to books, music and art, but it’s not every day they meet teachers from the Carnegie Science Center in Pittsburgh.

“Space is very, very big,” said Aly Toy, a Carnegie program presenter. “There’s a planet that’s very close to the sun. Does anybody know what planet that is?”

Someone yelled out, “Jupiter!” Another girl raised her hand and said, “Venus!” After a few more guesses, one of the kids had the answer: “Mercury!”

That game continued all the way through the asteroid belt and on to Neptune, with one little girl repeatedly shouting, “Uranus!” (Pluto was not included.)

Toy stretched a measuring tape across the front yard of the school. She placed models of each planet at different points of the tape to show a scaled model of the distance between the sun and each planet. Before the kids were allowed to scatter along the tape, she taught them about astronauts and the International Space Station.

“On Earth, if we jump as off the ground, gravity will keep us from flying away,” Toy said. “In space, there is no gravity.”

Toy also demonstrated how astronauts adapt to life in outer space when they eat and when they go to the bathroom. The first activity was “Potty Training for Astronauts,” during which volunteers had to hold a paper circle across their backsides and line it up with a target on a chair.

She used a small glass bell jar, a suction pump, a balloon and a dollop of shaving cream to explain the concept of a vacuum.

“[My favorite part was] when the balloon went back down,” said 5-year-old Zack Streeter. He thought the balloon would pop when Toy removed the suction, but it deflated instead.

“Opera is pure imagination,” Rethwisch said. “It’s so much fun to get to do this [for the kids], because they’re just so ready to take in information and to play make believe with us.”

The kids learned several things about opera during the presentation, including when and how to say “Bravo,” the difference between an aria and a duet (one singer versus two) and the term for practice (rehearsing). They all agreed with their 6-year-old classmate Patrick Ritacco.

“I thought it was pretty loud,” he said.