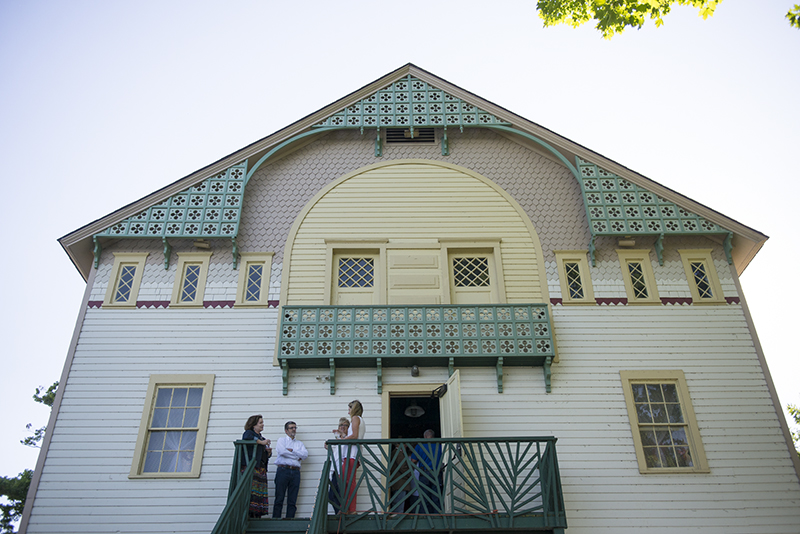 Jeffrey, an architectural preservationist, will deliver a Bird, Tree & Garden Brown Bag lecture at 12:15 p.m. Thursday in Smith Wilkes Hall in advance of the BTG House and Garden Tour. The tour, slated for noon Tuesday, will stretch across the grounds to provide almost 1,500 people an inside look at a dozen homes. Today’s Brown Bag provides context and extended details for certain homes on the tour.

When Lewis Miller and John Heyl Vincent founded Chautauqua in 1874, people erected tents on 40-by-50-foot plots of land to participate in the seasonal assembly. Eventually, as Chautauqua found its footing, those same people erected cottages atop those same tent camps, densely lining streets like Vincent and Miller and others. Some houses are practically inches apart.

Jeffrey’s own cottage at 27 Miller — two houses west of the Smith Memorial Library — stands apart from the neighboring ones. Across the street, homes range from Federalist to gothic-influenced to Dutch colonial to colonial. Here in the tightly-packed district surrounding Bestor Plaza, there really is no uniting style of architecture; the only overlap is the ubiquitous, shallow porch of each home.

That hodgepodge reality is why Jeffrey said a common description of Chautauqua — a Victorian lake community — is a misnomer. Victorian, as an adjective, is an umbrella term that encompasses at least 12 distinct architectural statuses, he said, and it fails to take into account the more recent architectural developments seen on the north and south ends of the grounds.

Those polar extremities — Chautauqua’s internal suburbs — are the newest areas of development. Homes on the north end, past the School of Music campus and north of College Hill Park, are distinct for their spacious lots. Ranch homes sprawl. Porches are harder to find. It’s not uncommon to even see a garage — a rarity in the jam-packed center.

The suburbanization of Chautauqua mirrored the suburbanization of the United States, Jeffrey said. Suburbs exploded across the country following World War II and the subsequent economic boom. Here, the same occurred, with suburban-inspired homes filling out much of the remaining land on the grounds. Jeffrey said no house was built north of College HillPark before 1952. Now there are dozens, most with the markings of post-war architecture — huge lawns, backyards and driveways.

But decades after that expansion ended, new construction on the grounds has returned to its roots.

Consider two of the tour’s houses: 22 Woolsey and 24 Woolsey. Both homes were completed in 2014 and replicate the Institution’s original, 40-by-50 foot lots that served as the foundation of the oldest cottages.

That return to tradition tells a larger story about Chautauqua, Jeffrey said, and of urban development writ large: People crave convenience and contact, not the relative isolation of backyard decks and yawning suburban lots.

“People are really thriving today because they can communicate with each other on a one-to-one basis, and that’s really key to Chautauqua,” Jeffrey said.

Chautauqua’s architectural trajectory tells something about America, then, but it’s also the key to understanding a more specific sense of place and history. You can talk about Chautauqua’s past all day long, Jeffrey said, but seeing, hearing and touching those homes provides a new point of entry.

He can tell somebody about Chautauqua a century ago; showing people the wires stapled to the walls and the clawfooted tubs in older homes’ bathrooms is another thing entirely.

“That’s what’s neat about Chautauqua, and especially this tour in 2016,” he said. “You’re going to see how people used this place over the entire course of its life from old cottages to suburban-style cottages to new cottages that look like old. It really tells the story well.”