Painters are often thought of as reclusive sorts, and the kind of people who choose to hole up by themselves in the studio for hours on end, not talking to anyone. For some artists, that rings true. For Audrey Ushenko, the opposite setting is where she prefers to create.

Once, when Ushenko had to find a space to show her work, one museum agreed, but only if she could be part of the event herself and let people walk around and ask questions as she painted. 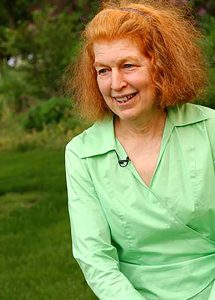 “In this country, for some reason or another, probably because of the cost, people don’t buy art and take it home with them and adopt it and love it like a pet,” Ushenko said. “What people are interested in are events and what I like is being in the stream of life. Art is communication.”

Ushenko, a figurative painter, will speak at 7 p.m. July 19 at Hultquist Center as part of the Visual Arts at Chautauqua Institution lecture series. Having spoken on the grounds before, she said this talk will focus on her take on the modern art world and her response to criticisms that “nothing is happening now.”

In many regards, Ushenko is very traditional, and even calls herself a “dinosaur,” in that she is a figurative painter who works with easels, doesn’t use mixed media and doesn’t really even know how to format her own emails. But in other respects, she is extending her drawing and painting skills in forward-thinking and creative ways.

At Indiana University-Purdue University Fort Wayne, where she teaches, Ushenko started a program where art students take part in projects for the science, engineering and technology departments. It’s been so successful that there is a 50-year backlog of projects they want the students to tackle, she said.

Other ventures Ushenko has undertaken include a commission for a public painting at the James R. Thompson Center in Chicago and a collaborative art project for Maker Week in Pennsylvania where she helped map out a general narrative and then let other people fill in the final product. Ushenko also might create drawings for a colleague’s virtual animation project, and said it is important for artists to combine their traditional art skills with technological abilities, expand their thinking about art and make themselves more marketable in the field.

Gone are the days of works only being displayed in galleries, Ushenko said, where people purchase expensive paintings from dealers who charge high prices due to overhead costs. Now, art enthusiasts can simply buy a Raphael Soyer painting on the internet for much cheaper prices. If artists want to maintain their appeal to audiences and customers, they have to reinvent themselves, Ushenko said.

However, beyond just the practical considerations, Ushenko said her interest in public art is also her way of contributing to society and not just thinking of her own career or interests. In the past, painting mostly for herself culminated in Ushenko being stuck with 60 paintings she didn’t know what to do with and her dealer couldn’t sell. She gradually realized creating for other people could have positive effects.

“When you’re young, you think you’re the center of the universe and everything you do is going to have a cosmic significance and some day, someway, somehow, this is going to be very important to everybody,” said Ushenko, who is in her 70s. “But then, as you hit middle age, you begin to realize that you’re just one out of [billions] of people on this overcrowded planet and you begin to feel as if you want to bring something to the table. You want to do stuff that’s going to be useful and bring something to people’s lives.”