School of Art Students Reflect on the Chautauqua Experience So Far 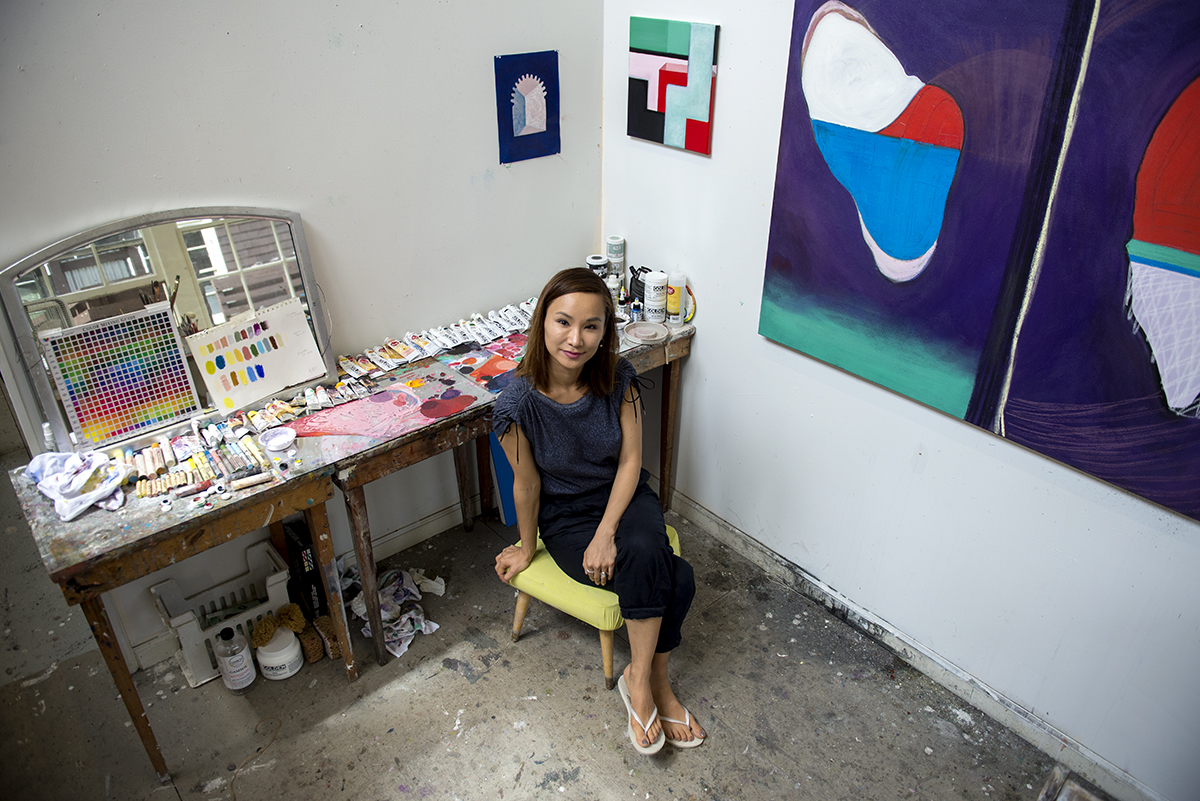 Before finding art, painter Thibaut Dapoigny was a professional tennis player and instructor for 10 years. Then, while contemplating a career change, a literal final blow convinced him to follow a different path.

“My last year teaching, I got slapped by a 3-year-old,” said Dapoigny, who is originally from France. “I was already preparing to move and do something else. It was like, ‘Yep, I’m done.’ … I don’t get slapped now when I paint, so that’s good.”

Now 30, Dapoigny moved to New York City six years ago to pursue art and has only been painting seriously for about two years. And if that time wasn’t short enough, Dapoigny, along with 36 other art students, will be presenting his works in the Chautauqua School of Art Annual Student Exhibition with only three and a half weeks of preparation.

“I’ve been feeling this whole year like, when you’re running down a hill and feel like any moment you can fall down on your face but you’re going and you can’t stop,” Dapoigny said. “These three weeks are literally that compact, same sort of intensity where you feel like there are moments like [you’re] missing a meeting. There’s just there’s so much you want to do.”

The turnaround time is unusually quick for assembling an exhibition of this scale, said Don Kimes, the artistic director of Visual Arts at Chautauqua Institution. Normally, putting together a show with about 120 to 150 pieces requires at least about six days. For this exhibition, however, Kimes said, he chose works from each student Thursday afternoon, and just three days later, they will be on display for the opening reception at 3 p.m. Sunday in Fowler-Kellogg Art Center.

Kimes said the student exhibition is one of the most popular shows in the season, and a rare occasion where the students get to show off their hard work on such a large, public platform.

“There’s a genuine interest on the part of the community and in what all the young artists are doing here, but they don’t really get to see the studio artists quite as much,” Kimes said. “It’s the one chance we get to put on that kind of performance exhibition … just like playing in the Amp is to the musicians or dancing in the Amp is to the dancers.”

Although the exhibition will take place roughly in the middle of their program, many of the students said the short timeframe to prepare their works motivated them to buckle down and focus on art. Ken Lu, a student ceramist who originally hails from Singapore, said since he came to Chautauqua, he has spent most of his time in his studio. He goes to sleep at 2 a.m., wakes up at 8 a.m., and gets to work again.

For the exhibition, on top of his pieces Kimes selected, Lu also participated in group projects. He made about 50 pots for other students to paint and also helped community members fire pinch pots as part of the Steamroller Print Event that took place last Sunday. People who come to the student exhibition opening Sunday can pick up a free pinch pot, Lu said.

For Danqi Cai, this exhibition will be her first professional gallery experience. Cai, who is originally from China, is not only the only printmaking student at the school, but at 20, she is also the youngest artist and among the least experienced of the bunch. It was only a year ago that she decided to pursue art, Cai said. Before, she was a computer science major at the University of Virginia.

Currently, her main focus at Chautauqua is learning as much as she can from other students and faculty.

“I feel like being an artist is not just about focusing on your work,” said Cai, who is transferring to the Maryland Institute College of Art this fall. “It’s very important to have a community as well and have people that you know. … [Chautauqua] reminds me that I need to support other people and learn from other people and build my own community.”

Hannah Schelb, a ceramist at the school, echoed Cai’s sentiments about community spirit at Chautauqua. Through pulling all-nighters and anxiously preparing for the exhibition in the same studio space, she feels a sense of camaraderie with the other ceramists in the program. Schelb also said the other students have provided her with valuable feedback that will help her improve in making figures.

Besides getting input from other students, Dapoigny said it was through the advice of Clintel Steed, who taught painting at the school earlier this summer, that he felt encouraged to continue exploring different subjects in his work. Dapoigny said he has painted a variety of subjects, from landscapes to portraits and even animals such as pigs and rhinoceroses.

Like Cai, this exhibition will be Dapoigny’s first time showing and selling artwork in a professional setting. He said even though other painters have more experience than him, he enjoys the fact that he came into painting organically and got to experiment with things like color theory without taking a class first. If he was already a master painter or drawer, Dapoigny said he might have gotten bored with the process, but because he’s still learning, he is able to have fun with painting and taking hours to get shapes and colors exactly right.

Compared with Dapoigny and Cai, who switched to art later, abstract painter Kiwha Lee Blocman and Schelb have been pursuing their forms longer. In a way, Blocman said, she has been around artistic inspiration her whole life. Born in Korea, she was raised in the United Kingdom, attended college for design in Australia, moved to New York for work and now lives in Singapore where she owns a gallery.

“Coming from Korea at the time, [my parents] were considered a little bit radical in terms of moving around so much and taking their kids around the world,” Blocman said. “I’ve definitely learned that from my mom, just traveling and picking things up along the way. … Having grown up on four different continents, it just becomes a part of you.”

Schelb also said her work is many years in the making. Even though it takes about five minutes to make a pot, she had to go through seven years of training and schooling so she could get to a point where she could craft something quickly.

As a child, Schelb was interested in painting and drawing as well as ceramics. However, after a personal tragedy, she said the hands-on quality of throwing was therapeutic in a way that other mediums were not.

“I found myself unable to paint after my father passed and I just couldn’t stand or sit. I couldn’t do it, it wasn’t kinesthetic enough for me, so I got up and started walking around, started doing things and I got into clay and I could throw,” Schelb said. “It’s helped me a lot, with my grief and loss and things like that. … And clay, it’s such a tactile [material]. It has memory, it responds to your touch. You can completely smash it, you could be angry at it.’ ”

In the same way, sculptor Heidi Roodvoets said she enjoys actively working with materials such as paper. She has collected things in nature during her time at Chautauqua, and in the past has even used materials such as lemon and jicama, a root vegetable.

“I like using materials in my sculpture from different places because it seems very honest,” said Roodvoets, an art student at University of California, Davis. “I’m not going to paint you a flower, I’m going to show you a flower. I have an interest in that, like I’d rather bring someone to a tree than talk about it. I enjoy sculpture in that I can actually put those things in it.”

Blocman and Cai have contrasting opinions about their respective media. Blocman said she loves painting for its versatility as it doesn’t require much equipment and technology.

On the other hand, Cai said it was precisely the regulations involved in printmaking that she likes.

“There are a lot of rules as to how large your margins should be and how clean the edges should be, and which side you should tear your paper from,” Cai said. “These are just really specific things and I think I find a comfort in that for some reason. But with painting, you can do whatever you want and that’s something that’s kind of scary.”

Back in New Mexico, where she was based, Schelb said she made many functional objects such as mugs, cups and jugs that could be used as vessels. Then, when Schelb quit her job and uprooted her life, she began to think about her own function as an individual.

“I’m in that little limbo spot — I packed up my whole apartment to be here. I have no ZIP code, I’m ready to go out into the world. It’s really scary,” Schelb said. “Like my own identity crisis coming out of my work right now, it’s like, ‘What’s my function?’ ”

In her sculptural work using organic materials, Roodvoets explores ephemerality and the idea that the present is always becoming the past. She often lets the natural objects in her sculptures decay to illustrate that idea, and even used it to apply to events in her own life.

“I’m just trying to live in the present, but I always end up thinking about, ‘I’m here in Chautauqua and it’s so beautiful and it’s so amazing and I get to work on art 24/7, and I get to talk to amazing people, [but] this is going to end at some point and then I’ll go on to the next great thing,’ ” Roodvoets said. “There’s always just this passage of time, so [I’m] collecting things that are here and present and then [I’m] recognizing that those objects, this place will also fade out of my life. It will always be present, but I won’t be there.”

Brush Up Your Poetry or Prose, Thanks to the Chautauqua Writers’ Center