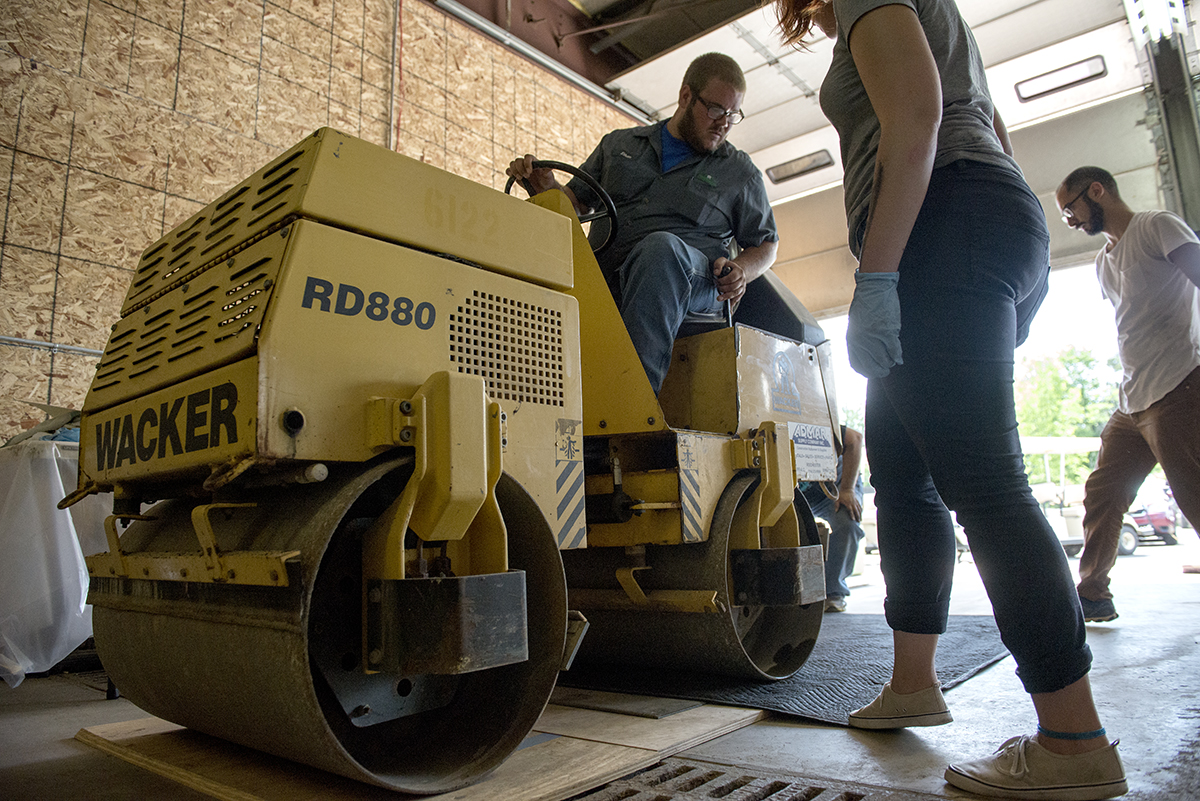 For most people, paint brushes or pottery wheels come to mind when they’re thinking of common art tools. But starting Sunday, they can add steamrollers to the list of things with which they can use to create art.

The Steamroller Print Event, the first-ever event of its kind at Chautauqua Institution, will be held from 1 to 3 p.m. Sunday at Bestor Plaza, and community members can watch as artists from the School of Art make prints using a road roller machine.

Before Sunday’s event, Tom Raneses, the school of art’s master printmaker, gathered a group of past and current students last week to create steamroller prints at the bus garage.

On Thursday, a group of about 11 people helped to ink over carved images on linoleum and wood boards so that when the steamroller drove over the paper placed on top of the boards, the ink would be pressed onto the paper. Each artist got to create multiple prints of their images, with one copy going to the Stroll Through the Arts Gala on July 30, where it will be auctioned off to raise money for the Visual Art Student Scholarship Program, Raneses said.

Kate Plourde, an artist who also works in the School of Art’s office and got to create an abstract print last week, said the size of the steamrolled prints are at a larger scale than normal prints. Most linoleum blocks are around 9 by 12 inches, whereas these prints were 24 inches by 36 inches.

Taro Takizawa, a graduate printmaking student at Syracuse University, was a student at the School of Art last year and returned to Chautauqua to participate in the steamroller printing last week. He said his image, which depicts a koi fish pond accompanied by geometric lines, took about two weeks to carve. The koi serves as both a reminder of his Japanese roots and to signify a thematic message, Takizawa said.

“It’s my way of representing how I enjoy getting away from stuff. Life is so busy and hectic,” Takizawa said. “I admire how they can just freely swim around, but they are also trapped in a pond. That kind of mismatch is what I’m interested in, and also visually they’re definitely really nice.”

Heidi Roodvoets, another student, said she wanted to try something outside of the sculptures she usually makes and she had never seen steamroller printing before. She said she especially wanted to try it as she might not have another chance to do it again.

Similarly, Thibaut Dapoigny, a painting student, said he was in Raneses’ printmaking class and wants to roll his own print at the event on Sunday. He said in just a week of the class, he’s learned “everything” from watching other printmakers work and how to adapt printmaking techniques to his own painting.

Betsy Vance, the president of VACI Partners, a group which raises money to give scholarships to students at the School of Art, said after the prints are done on Sunday, they will hang in Strohl Art Center and then be put up for auction. She said she hopes the unique art event will generate more support for art students and continue to help talented artists come to Chautauqua in the future.

“What we’ve learned over the years is that by providing scholarships to students, you’re able to get a more diverse population of students, and a much more interesting, dynamic group so it’s just a healthier environment all the way around,” Vance said. “Everyone learns from everybody else’s differences and new ideas and fresh approaches.”

Besides for the students, the event is also for the greater Chautauqua community to have a greater exposure to art, said Ken Lu, a ceramics student. Along with other students, Lu will be hosting and facilitating a free pinch pot event during the event where anyone can come and make their own creations with clay.

Lu said he will then fire the pots in a kiln and display them at the Annual Student Exhibition on July 24. Additionally, anyone who attends the exhibition will be able to pick up a pot for free, Lu said.

“It’s just trying to reach out to people outside of the art world because people who do art [are] only 10 percent, and people who we influence are only that 30 percent of society, so how in a better way can we actually reach out to 70 percent of people and get them interested?” Lu said. “I think art and ceramics, in my opinion, is part of our life and what we as humans try to do.”