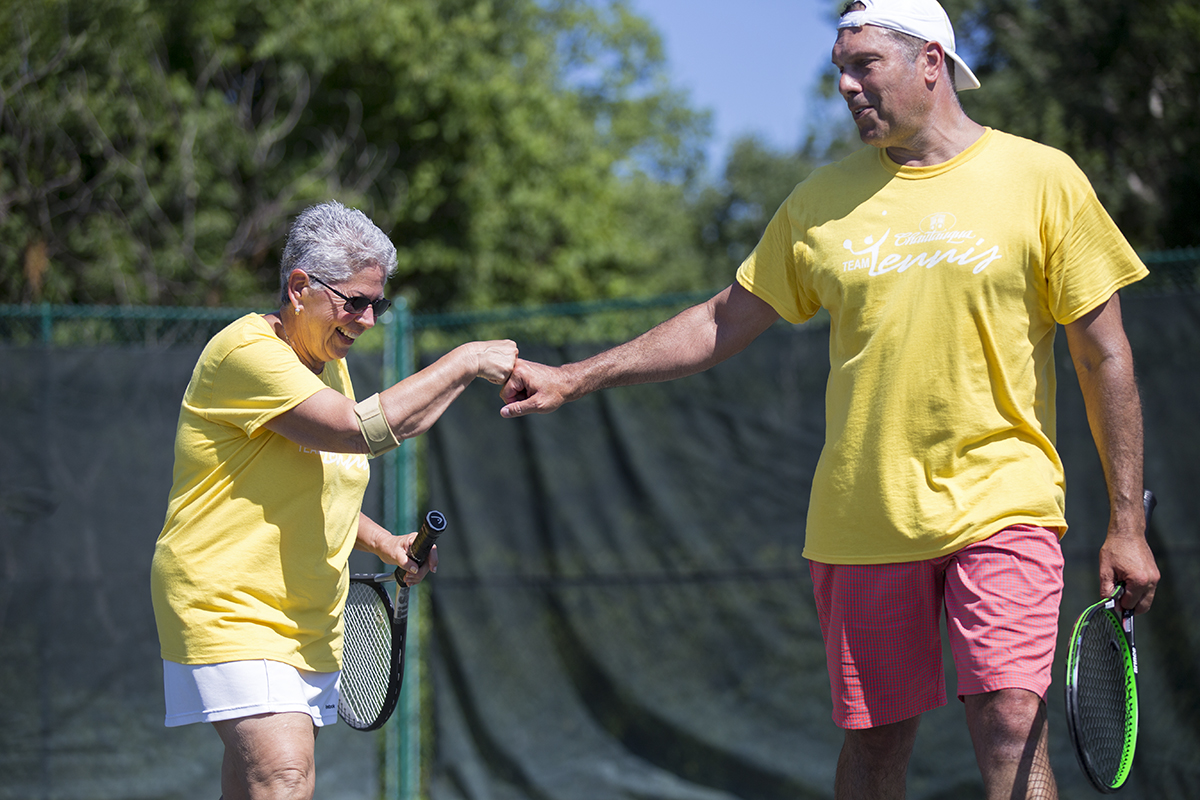 The tennis courts at Chautauqua Institution are resurfaced with five tons of clay every off-season, fed by an underground watering system and require intensive maintenance throughout the summer.

But all that love and attention pays off on days like July 23.

The Chautauqua Tennis Center hosted two events and almost 50 players during one of its busiest days of the year last Saturday, with a team tennis event in the morning and youth interclub event in the afternoon.

Head Professional Paul Young said the team tennis event is one of the most popular at the center.

“Some treat it more socially, while some treat it more competitively,” he said. “It takes most of the morning and it’s generally our most well-attended event of the year. We’ll have anywhere from 32 to 40 players depending on the season.”

During the team tennis event, competitors were divided into Blue, Red, Yellow and Green teams, with each player receiving a T-shirt of their respective color. Following three rounds of competition between the sides, the team with the most accumulated games was declared the champion.

This meant that each player could help their team even if they lost a match, provided they were able to take a couple games off their opponent.

Amy Gawtry and Linda Colburn of the Red team took on Judy Williams and Karan Chopra of the Yellow team during the third round of competition. The back-and-forth match ended with a Gawtry and Williams victory in a tie-break, with both doubles partners claiming six games for their respective teams.

“A lot of these people who participate every year are really good at supporting us,” Robinson said. “It’s a Saturday and they’ve got a million other things to do, but they spend the whole morning here.”

After the team tennis event wrapped up around noon, members of the Lake Shore Country Club in Erie, Pennsylvania arrived for an interclub event with players from the tennis center.

While these matches were just for fun, Lake Shore Country Club coach James Getty said the event gave him a chance to work with his players on improving their tennis skills.

“As we go along, we can work with our kids on improving their game based on score, but the goal wasn’t to come here and win or lose. It was just to provide good play against different people,” he said.

One of those kids was 11-year old Hayden Hutchinson, who said the facilities at Chautauqua were some of the nicest he had seen.

“They have technology that can help the courts and the players,” Hutchinson said.

Saturday’s interclub match was an extension of Youth Tennis Program at the tennis center, a instructional skill development program that looks to get kids involved in tennis from the age of three. While team tennis was the last special event of the season at the tennis center, the Afternoon Doubles program and Match Play clinic will continue until Aug. 26.