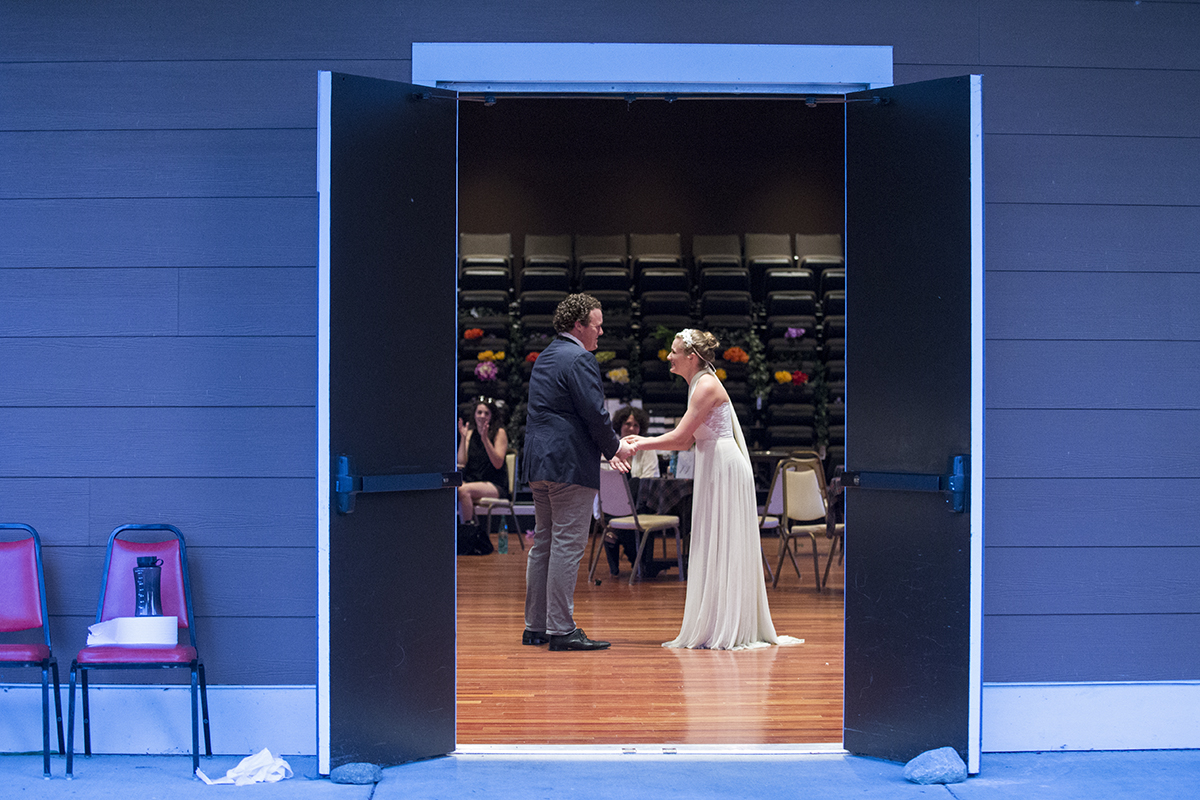 You find yourself in a town that only exists for one day every 100 years. The townspeople are gathering in a reception hall for a wedding, and you are seated in the middle of everything as a story unfolds.

John Giampietro directed his production of Brigadoon with that vision in mind.

The risers will be retracted, and eight tables will be set up with placecards and arranged seating. The audience will assemble at 7:30 p.m. Thursday in McKnight Hall, which will be made to look like the wedding of Jean, played by Jessica Niles.

Niles, who has loved planning parties ever since she was little, had a hand in planning for her character’s wedding.

She took the color scheme from the heather flower, which is a significant element in the musical. The tablecloths will be plaid, paying homage to the Scottish setting. Niles also designed the invitations, which were used as a way to reserve seats at the tables.

“The wedding is in the beginning, which is interesting because it introduces us to this place where maybe there would be a wedding every day,” she said. “It’s just a very happy, fairytale land.”

Vocal coach Bénédicte Jourdois provided the actual dress from her own wedding, which Niles will wear.

Giampietro said Marlena Malas wanted to do a production of Brigadoon in part because of its parallels with the Chautauqua experience.

Giampietro wanted to create an immersive theater experience, which he accomplished by making the audience a part of the set.

“It’s a tangible experience that the audience has with the actors,” he said. “It’s not just coming into a hall and watching forward. We’re doing it with you, as opposed to just doing it for you.”

For singers, Giampietro said, interacting so much with a crowd is an unusual aspect of performing. And in Brigadoon, the players will be singing inches away from people seated in the center of the room.

“The most intimate a singer may get is in a song recital,” he said. “Actors usually have a lot more interaction with their audience.”

Musical theater is becoming a common occurrence in today’s opera companies, which is bridging the gap between both art forms. Chautauqua’s Voice Program is no exception to the trend, which is what brought upon the first musical theater production as far as Giampietro can remember in his 10 years involved in the program.

For young artists, it’s important to be proficient in both. And for American students, it’s in their DNA. Musical theater is an American art form in its origins, which means it’s in an American vernacular; something opera students do not always get to perform.

Philip Stoddard, who plays Tommy, feels as though musical theater is part of his identity as an American singer. He said Brigadoon fits like a glove because the style has its early origins rooted in classical music.

“You’re no longer an opera singer or a theater singer,” he said. “It’s about finding a way to have a fusion of both.”

He said that a piece such as Brigadoon is perfect for young singers like him and his cohorts because it can teach them how to be classically trained singers in a theater setting, with dialogue, acting and dancing.

“It lends itself well to what we as American singers have to contribute,” he said.

Giampietro said musical theater is stylistically different than most opera, but that does not mean the cast or faculty takes it lightly.

“We’re taking this music just as seriously as we’re taking the Verdi [Rigoletto],” he said. “Of course, the Verdi is more sophisticated, but that doesn’t mean it’s less. Because they are highly skilled musicians, it probably comes easy to them.”