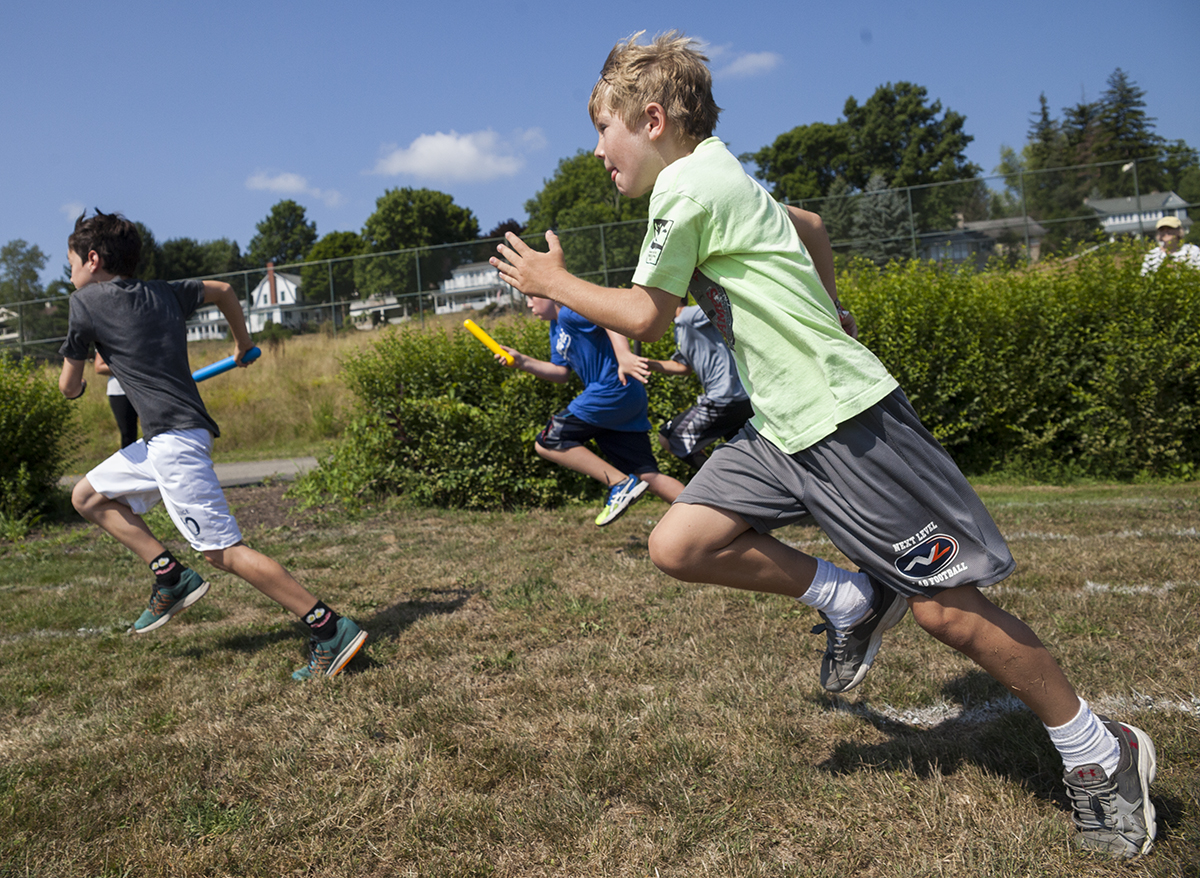 Boys’ and Girls’ Club hosted its annual Track and Field Day last Thursday morning, as some of the best athletes at Chautauqua Institution faced off in a morning of friendly competition.

And many of them did it barefoot.

“Over the decades, technology has changed running shoes, but the oldest groups and the counselors seem to go without shoes, so it doesn’t matter,” said Jennifer Flanagan, Club’s director of programming.

Children across three different age groups competed against one another on the athletic field between Club and the John R. Turney Sailing Center. Two records were broken and one tied across 16 different events.

Izzy Broughton shattered the 50-yard dash mark for Group 4-5 Girls with a time of 7.75 seconds and Molly Walsh set a new record in the softball throw for Group 6-7 Girls. Her distance of 143’2” would have placed Walsh atop the podium for all three age groups on Thursday afternoon.

These record-breaking performances seemed to confirm a trend Flanagan said she had noticed in recent years.

“Girls are now, in the three decades that I’ve been here, more involved in sports and training,” Flanagan said. “[They’re] a little more competitive.”

John Stecker also tied an existing record in the 50-yard dash for Group 6-7 Boys, with a time of 6.70 seconds.

Those Clubbers less interested in the record books found other activities to keep themselves entertained all morning.

Group 2 Girls’ Brooke Zarnikau said she enjoyed playing in the water and competing in other events designed for younger Clubbers, while a couple Group 5 Boys spent the morning trying to get into their counselor’s phone to play The Chainsmokers’ song “Closer” for a sing-along event.

“I actually got in using Siri. He hadn’t disabled Siri when you’re on the lock screen, so I hacked into his music and played the song,” Nathaniel Attwell said. “Then I yelled at him to change his settings because I could always get in.”

Track and Field Day was canceled last year due to rain, but the weather this year cooperated. Events ranged from old standards such as the 100-yard dash and standing broad jump to a basketball free throw contest and baseball throw.

Walsh also claimed first place in her age group for the 220-yard dash and discus, while Broughton’s 100-yard dash time of 15.13 topped Group 4-5 Girls. Stecker added first place in the 440-yard relay in Group 5-6 Boys to his list of accomplishments on the day.

Other accolades included middle distance running domination by Andrew Alexander in Group 5-6 Boys, who took first place in the 100- and 220-yard dash. Molly Stecker showed her prowess in both track and field, with a win in the 100-yard dash and standing broad jump.

Flanagan said her favorite events are the shot-put and discus, because she used to coach those events on a high school track and field team, but the most popular events were those that brought everyone in Club together.

“The big turnout today was for the staff relay. We had male counselors, female counselors, [counselors-in-training], sailing staff and waterfront staff,” Flanagan said. “It seemed like they all wanted to get in on the action.”