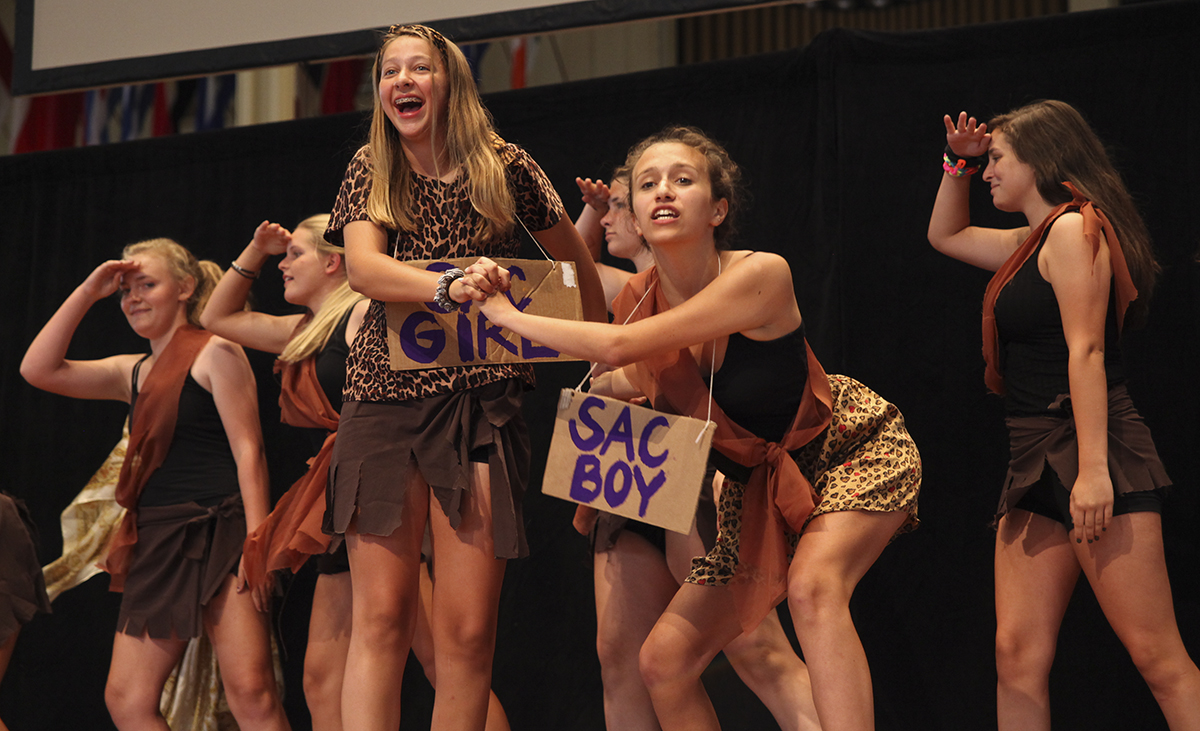 On the same stage where Amelia Earhart once spoke about her landmark flight across the Atlantic Ocean, a high-schooler in full aviator gear lip-synced to R. Kelly’s “I Believe I Can Fly” and Air Band returned to Chautauqua Institution.

On Thursday afternoon, Boys’ and Girls’ Club staged their annual benefit for the Chautauqua Fund in the Amphitheater, as each Club group auditioned for the chance perform tonight at Old First Night festivities.

“SAC Girls went last and I was having anxiety,” counselor Katie Maley said. “Our girls were just really excited and it was fun going last because we went and almost immediately got the results.”

It was good news for both SAC Girls and SAC Boys this year, who finished with the only first place tie in Club history.

“It was actually a tie,” said Air Band judge and Club music counselor Ashley Rohm. “I saw the numbers. I have to say, everyone’s always been like, ‘SAC Girls win all the the time,’ so I was kind of skeptical about it, too. But it was actually a tie.”

The event drew a large crowd, with family and friends arriving early to claim a good seat. Club groups sat in the grandstand, while the Amphitheater’s lower bowl was almost completely filled with spectators. The proceeds from every ticket to the event were donated to the Chautauqua Fund.

Featuring a star-studded lineup of performances, Air Band saw Clubbers tackle the musical stylings of everyone from Ke$ha to Queen. Freddie Mercury was one of the big winners of the night, making an appearance in no less than four different performances.

Other highlights included Group Eight girls dancing in the shark costumes from Katy Perry’s Super Bowl halftime show and the always-entertaining (but not-eligible-to-win) performance from the Counselors-in-Training.

But this year, Air Band once again came down to SAC Boys and SAC Girls.

“It’s really historic, because there has never been a tie ever before,” Maley said. “There have been years where SAC Boys won, and 7 Girls even won one year, but usually it’s SAC Girls. That’s part of the reason why there’s pressure, because the girls want to win and put their best foot forward.”

The SAC Boys went first on Thursday with a performance titled “An American History Lesson with SAC Boys,” featuring a Civil War re-enactment set to Taylor Swift’s “We Are Never Ever Getting Back Together.”

SAC Girls went back even further, starting their performance “The Evolution of SAC Girls” in prehistoric times with detours in Ancient Greece and the 1980s. Nods to the movies “Hercules” and “Grease” also seemed to resonate with the judges.

Rohm said she knew how much practice went into some of the performances, including the SAC Girls she saw rehearsing around Club this week.

“I see them throughout the week and I kind of know which ones worked together as a team and other ones where the counselors were the ones who did everything. So l like to take that into account,” Rohm said. “For instance, with the SAC Girls, I would come down during craft time and they would be making a ton of their [props]. It was a whole team effort.”

Air Band judge and Club nurse Carol Calarco said judging for the competition is based on costumes, originality, lip-syncing, choreography and props.

“The judges get a sheet that we circle from one to 10 in each of those categories. Then we send our slips in, so we don’t really know what the other judges have voted on,” she said. “There’s no coercion from anybody else to make the score for one group higher than another.”

Each group is allowed to borrow any costumes or props lying around Club, but most of them get a little more invested in their performance.

Maley asked the SAC Girls to each bring in $3, which she said was enough to purchase anything else the group needed for their performance. Clubbers also got to keep the costumes as a way to remember Air Band.

She said those memories are what make this Chautauqua tradition so special.

“That’s the beauty of Club,” Maley said. “It’s a friendly competition, but at the end of the day, even if your team doesn’t win, everyone’s just so excited to have done it.”