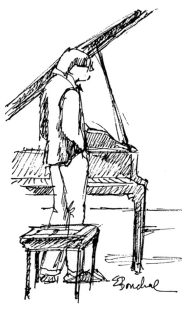 Concerto No. 1 in B-flat Minor for Piano and Orchestra, Op. 23

Peter Ilyich Tchaikovsky was born on May 7, 1840 in Votinsk, Russia, and died on Nov. 6, 1893, in Saint Petersburg. He remains one of the most popular composers of all time, beloved especially for his symphonies, ballets and concertos. His Piano Concerto No. 1 was composed in 1874 and received its first performance in Boston on Oct. 25, 1875, with Hans von Bülow as soloist and Benjamin Johnson Lang conducting the Boston Symphony Orchestra. It is scored for two flutes, two oboes, two clarinets, two bassoons, four horns, two trumpets, three trombones, timpani, and strings.

The first of Tchaikovsky’s piano concertos continues to hold a special place in the hearts of performers and listeners alike. Tchaikovsky had virtually completed the piece by Christmas Eve of 1874, and he eagerly played it for his friend and colleague, Nicolai Rubinstein, hoping to gain his friend’s advice on the practicality of the piano passagework. Rubinstein’s opinion was important to the composer, not only on a personal level, but because Rubinstein was a pianist of considerable influence. Indeed, Tchaikovsky hoped that Rubinstein would agree to perform the work. How bitter, then, must have been the composer’s reaction to his friend’s torrent of harsh criticism, declaring the work to be poorly written for the piano, and even accusing Tchaikovsky of stealing melodies from other composers.

There may have been a modicum of truth in the first accusation, as the composer later revised the solo part (in 1876 and 1889) based upon the suggestions of other pianists who performed the piece. As to the charge of theft, what Rubinstein may have noted was Tchaikovsky’s use of Ukrainian folk tunes in the outer movements, as well as of a French song, “Il faut s’amuser, danser et rire,” in the second movement. Tchaikovsky must have realized that piece was essentially correct as he had originally written it in most other respects. Indeed, the great pianist and conductor, Hans von Bülow, who gave the piano concerto its first performance in Boston with Benjamin Johnson Lang conducting the Boston Symphony Orchestra, cabled Tchaikovsky with the good news of the work’s immediate success. Even Rubinstein found it in his heart to apologize to Tchaikovsky for his crude chastisements, eventually both conducting and performing the work in Moscow and elsewhere. Posterity, of course, has deemed the work as the Romantic piano concerto par excellence.

One of the work’s most intriguing aspects is the fact that its famous opening theme from the first movement — perhaps the Concerto’s most memorable and beloved feature — disappears completely after its opening statements. Tchaikovsky compensates for this disappearance by rewarding the patient listener with a lush Romantic theme in the last movement.

I leave the final word about Tchaikovsky’s Concerto No. 1 to Paul Henry Lang, who wrote the following in the preface of The Concerto: 1800-1900, a statement that succinctly identifies this piece’s enduring appeal:

“The secret of (its) enormous and lasting success rests on the combination of sweepingly brilliant writing for the solo instrument with melting, long-grained ultra-Romantic melodies, and even with popular Russian tunes, all of it skillfully kept in the clear ­— nothing  is ever covered or obscured here — and  the whole wrapped in a lively and colorful orchestral garb. … No pianist can consider himself arrivé until he can launch successfully into the crashing chords, the racing octaves, and the bracing runs of this world-conquering concerto.”

Tchaikovsky’s Symphony No. 4 was composed in 1876-7 and received its first performance in Moscow on Feb. 22, 1878, under the baton of Nikolai Rubinstein. It is scored for piccolo, two flutes, two oboes, two clarinets, two bassoons, four horns, two trumpets, three trombones, tuba, timpani, percussion, and strings.

Composed in 1876-77, Tchaikovsky’s Fourth Symphony remains one of his most popular works. The composer dedicated it “to my best friend,” but this was but a thinly disguised reference to the widow, Mme. Nadezhda von Meck, a woman who had long been his staunchest supporter. Tchaikovsky and von Meck never met each other, making this composer-patron relationship one of the most mysterious in history.

At von Meck’s request, Tchaikovsky sent her a “program” for the Fourth Symphony, a work he called in letters to his patron “our symphony,” but this document sheds precious little light on the music. His explanation of the opening fanfare, however, is telling:

“The Introduction is the kernel, the quintessence, the chief thought of the whole symphony … This is Fate, the fatal power which hinders one in the pursuit of happiness from gaining the goal …”

This reference to “fate” brings to mind the statement attributed to Beethoven that the famous four-note motif of his Symphony No. 5 represented “fate knocking at the door.” And Tchaikovsky acknowledged the kinship in a letter to Sergei Taneyev. Tchaikovsky was quick to add, however, that he had only borrowed the “central idea” of Beethoven’s symphony, not its content.

Tchaikovsky’s “fate” motif is heard right at the beginning of the first movement and returns toward the end of the finale, serving as a device to unify the four-movement symphonic cycle. This is not the only thematic recall within the piece (there is also a reprise of an idea from the third movement in the finale), but it is the one that most fully grabs our attention. Tchaikovsky uses similar thematic connections as well in his Fifth Symphony.

Tchaikovsky’s abiding strength as a composer rests not so much in the organic development of motivic ideas as one finds in the music of Brahms, but rather in the wealth of his melodic invention and the brilliance of his orchestration. Both qualities may be found in abundance in the Fourth Symphony. One also might add to the list of its assets Tchaikovsky’s ability to compose grand themes and broad rhythmic gestures derived from the world of ballet — a world to which he made, and was to continue to make, many marvelous contributions. Who but the composer of Swan Lake and The Sleeping Beauty could have written the main body of his first movement “in the style of a waltz” with such seeming effortlessness? The world of Russian folk music also finds a voice in this symphony, as Tchaikovsky uses a song titled “The Little Birch Tree” as one of the two principal themes in the finale.

The exhilarating finale presents a contrast of two themes: a whirlwind tour de force and the aforementioned folk tune. Each theme is presented alternately in varied guises, culminating in the recall of the fanfare that opened the first movement. Once the “fate” crisis passes, the symphony speeds on to its thrilling conclusion.