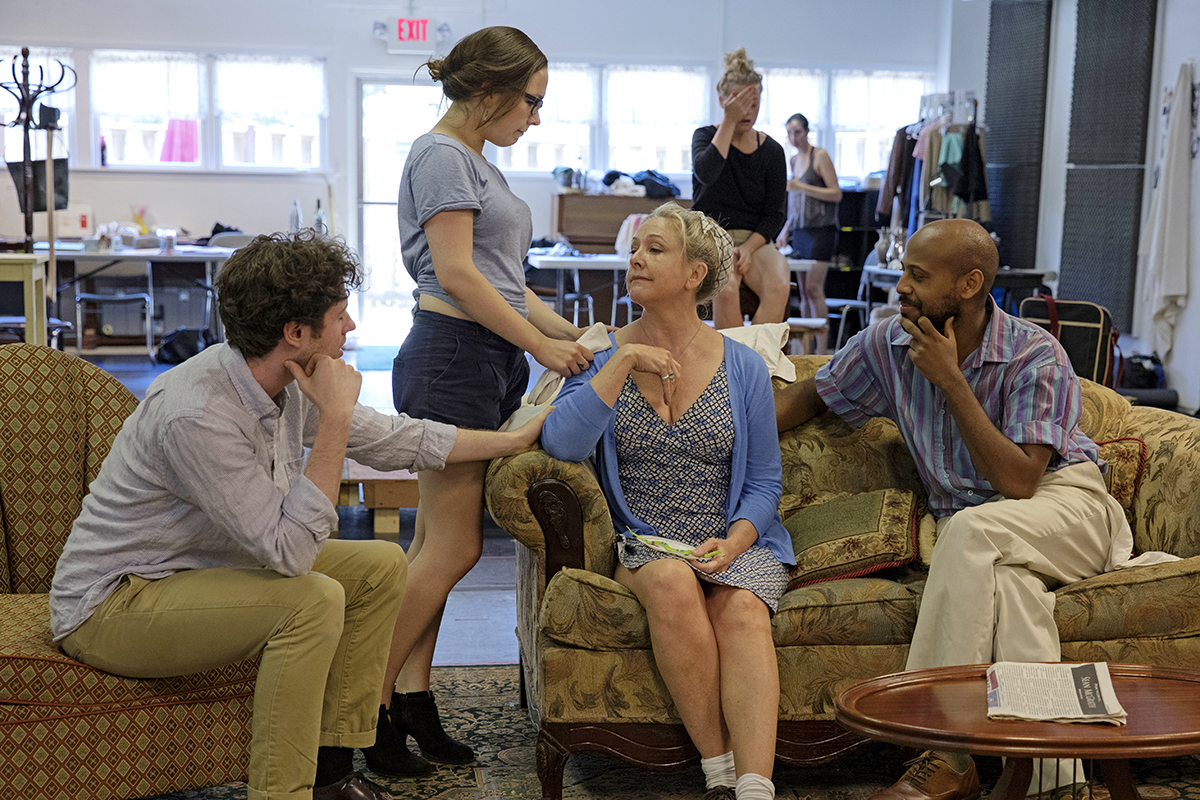 Chautauqua Theater Company's cast rehearse 'Noises Off,' which is the first production of the season, on Saturday, June 24, 2017 in Studio A. PAULA OSPINA / STAFF PHOTOGRAPHER

If Chautauqua Theater Company members do their jobs right, Noises Off will be a disaster.

The 1982 play from English playwright Michael Frayn opens the 2017 CTC season at 8 p.m. Friday and will run through July 16. A play within a play, Noises Off follows a production of fictional British sex farce Nothing On. For the unfortunate actors in Nothing On, a bad dress rehearsal does not portend a great opening night or even a successful run.

“I’ve certainly been in shows where people have been forgetting their lines, but I’ve never been in one where that was the purpose,” said Craig Wesley Divino, one of CTC’s guest actors who portrays Lloyd, the director of Nothing On.

Noises Off may be a comedy, but that doesn’t make it easy to do. Lines overlap, scenes are repeated, slapstick gags are intricately choreographed, and doors slam and stick on purpose. An American film version of the award-winning play came out in 1992, but was widely panned by critics who said the comedy didn’t translate well from stage to screen.

The first act takes place during a flub-filled dress rehearsal. In the second act, the set rotates, so the audience sees the chaos backstage. The third act returns the audience to the mainstage action, but shows how tired the actors are of Nothing On and their cast mates.

The self-referential elements of the play make Noises Off fun for theater folk, as well as audience members who perhaps haven’t been in a theater production themselves, Divino said. Of course, here, everything is heightened. The smart layers of the comedy, as well as the slapstick routines scattered throughout, make the show exhausting.

“Part of your brain is always engaged in making sure that you know where you are in the pretend play, while you are doing the real play,” Divino said.

CTC Artistic Director Andrew Borba, whose first exposure to Noises Off was as an audience member at the 1984 Tony-nominated version, said he has long wanted to bring the farce to CTC. This was not just because he wanted to direct the play, but because he thought it would resonate with a range of CTC viewers. (Noises Off is recommended for ages 10 and up.)

Borba called playwright Frayn “a watchmaker” for the way in which he crafted the comedy.

“The first time I saw it on Broadway, I literally laughed so much my sides hurt,” said Carlyon, who has a background in stage comedy and directed a regional performance of Noises Off in the mid-1990s.

Carlyon has seen the play performed five times, to varying degrees of success, and said part of why it remains funny 35 years after its premiere is because the characters are caricatures of real people. There’s the temperamental director, inexperienced young actress and dimwitted leading man, among others.

“You approach it as you would if you were doing Hamlet or King Lear,” Carlyon said. “Comedy is serious stuff, and for it to work, you can’t act comic.”

While preparing for the role of clueless bombshell Brooke, CTC conservatory actress Kelsey Jenison asked if her character was even trying to be a serious actor or if “she’s just really bad at it.” Throughout the production, Jenison’s character stares off and stops responding to her scene partners.

“This role in particular is very fun because I take all my training from the last eight years and I just kick it out the window,” Jenison said. “I’m just there and I don’t respond to people.”

She’s hoping to replicate that skill and not try to be funny.

“There’s always a little voice in the back of your head that’s like, ‘Don’t push it,’ ” Daly said. “The script is funny itself, and the circumstances are so hilarious, and it’s impossible for it not to tickle someone because it’s just a really well-developed play.”